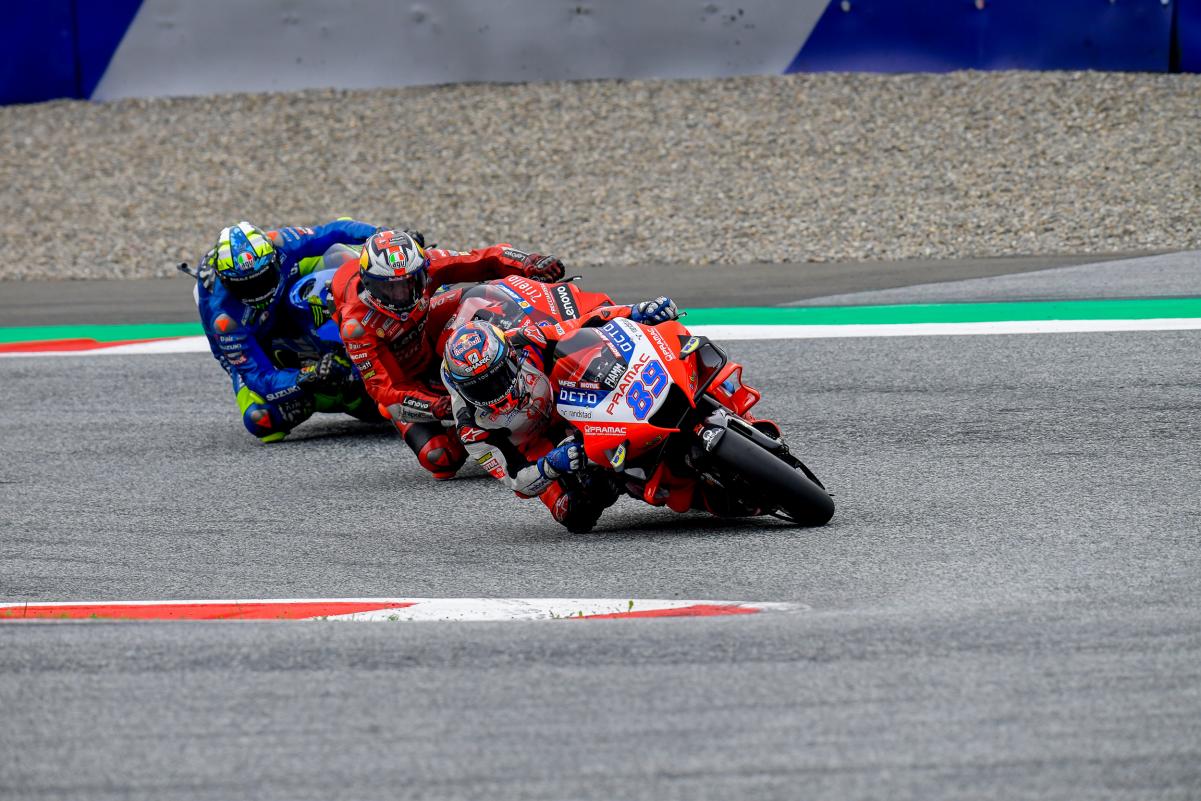 Jack Miller and Francesco Bagnaia are already under threat from MotoGP rookie Jorge Martin, based on comments from Ducati’s motorsport boss after the two Red Bull Ring rounds.

Martin won the Michelin Grand Prix of Styria and finished third in the Austrian Grand Prix, from the second and third pole positions of his short premier class career so far.

In doing so, he was clearly Ducati’s best performer, whereas the other three on current-specification Desmosedicis could only manage a single podium between them.

Miller crashed while chasing a podium in the Styrian Grand Prix and was only eighth before he gambled and lost on an early change to wets in the Austrian Grand Prix, ultimately finishing 11th.

Johann Zarco, Martin’s Pramac Racing team-mate, was sixth in the first race in Spielberg but crashed out of fifth in the second encounter, while Bagnaia recorded results of 11th and second on the other Ducati Lenovo Team entry.

Ducati holds the contracts for both of the riders domiciled at Pramac, effectively its B team, having managed to lure Martin away from KTM’s renowned conveyor belt.

The last three men to have arrived at the works team came directly from its senior satellite squad, namely the two incumbents and Danilo Petrucci, and both Miller and Bagnaia are contracted for next year.

Asked if its Spanish rookie could end up on a factory-entered Desmosedici in the future, Ducati Corse general manager Gigi Dall’Igna said it was more likely than not.

“He has the full support from the factory,” Dall’Igna told Spanish sports newspaper AS.

Ironically, it is KTM refugee Zarco who has arguably been Ducati’s best for much of the season to date, although Bagnaia now has the advantage in the championship following his latest podium.

The Italian occupies second on 134 points, 47 behind Yamaha’s Fabio Quartararo, with Zarco fourth on 132.

In a further irony, the only two Ducati riders who have won races in 2021, namely Miller and Martin, are fifth and 10th respectively on the table with 105 and 64 points.

The latter has, however, missed four of the 11 races to date after fracturing multiple bones in a crash in practice at Portimao, something which Dall’Igna believes the 23-year-old has learnt from.

“What is incredible is that at any moment he is capable of putting himself to the limit of his possibilities to do well,” said Dall’Igna.

“In Portimao, he should have been a little calmer, because it was only his third MotoGP grand prix and there, with the accident, he understood that it is not always necessary to test all laps at 100 percent, and now he is doing fantastic.”

On Martin’s ride to third in changeable conditions at the Austrian Grand Prix, he added, “It was not easy to manage the situation well in these conditions, and he has done it.

“It is not only a question of talent, because the head is also very important.”

Ducati will have eight bikes on the grid on a full-time basis next year, including those of the aforementioned four riders in their current teams.

Gresini Racing will come across to the Bologna marque, fielding Enea Bastianini and Fabio Di Giannantonio, while Team VR46 essentially takes over Esponsorama Racing’s spots on the grid.

VR46 management has already confirmed that it will retain Luca Marini, who has been placed at Esponsorama for his rookie season, with Marco Bezzecchi expected to land its other MotoGP seat for 2022.

The 2021 season continues this weekend with the British Grand Prix at Silverstone.