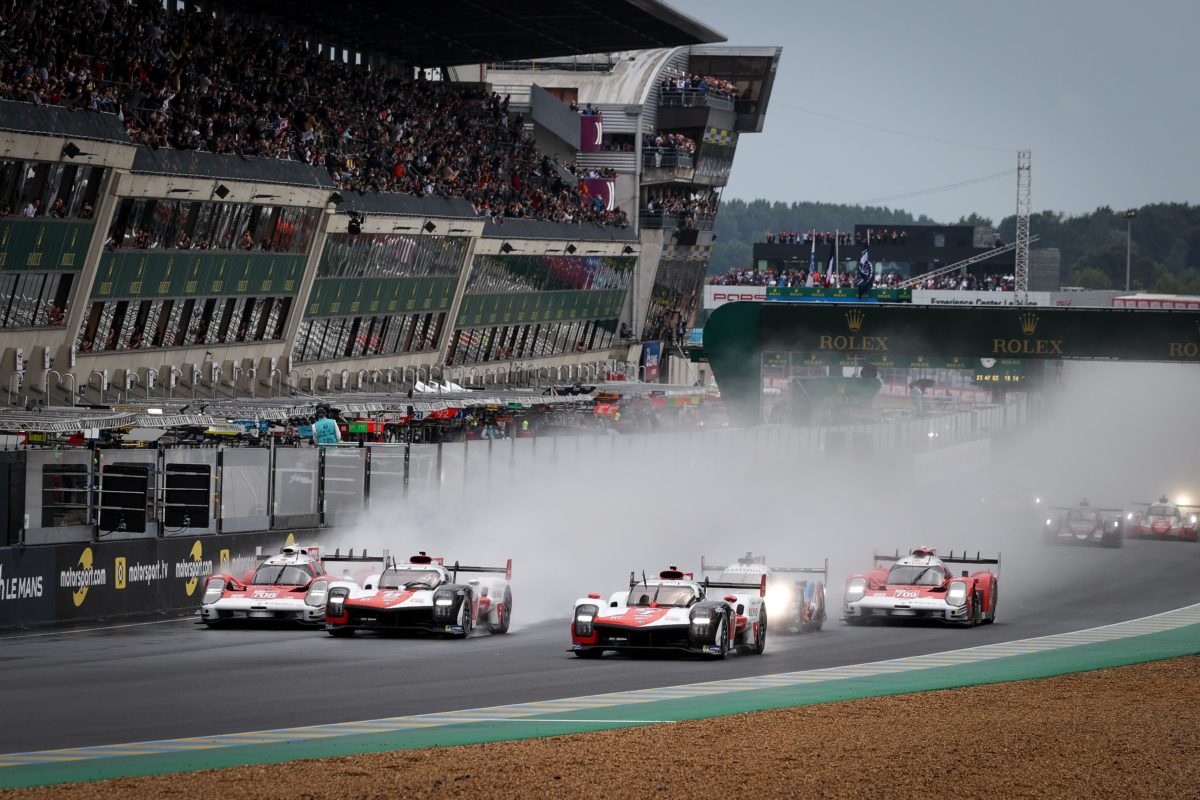 The start of the 24 Hours of Le Mans

Toyota holds the first two places a quarter of the way through the 2021 edition of the 24 Hours of Le Mans.

A wet start to the race saw the #8 entry turned around at the Dunlop Chicane by the #708 Glickenhaus, dropping well down the order.

The Japanese entry then stopped on the Mulsanne Straight before getting going once again, only to run into the escape road at the Mulsanne Corner.

Sebastien Buemi was at the wheel for all three incidents, the Swiss driver able to recover the car and climb back up the order.

Running third a lap down is the sole Alpine Hypercar, which had a half spin at Indianapolis and for a time sat broadside to the road, followed by the #708 Glickenhaus.

The LMP2 class has seen a number of cars off the road with significant change in position.

At the six hour mark, Team WRT headed the field with the #41 entry, Louis Deletraz at the wheel.

Second was the #22 United Autosports entry with the second WRT car third ahead of the #65 Panis Racing effort – a car shared by Australian James Allen.

Track conditions had dried by the third hour with the race settling down after a busy start.

Heading the LMGTE Pro class was the #51 Ferrari 488 GTE Evo, the AF Corse entry holding a slender advantage over the team’s second effort.

Ferrari also led the way in LMGTE Am, taking over shortly after the six hour mark as the #33 TF Sport Aston Martin pitted to cede to spot.

It therefore left AF Corse at the head of both GT competitions, with Kessel Racing’s #57, which has Aussie Scott Andrews among its driving roster, running third in class.

At the wheel of the Dempsey-Proton Racing Porsche, Matt Campbell ran 10th in the car he’s sharing with New Zealander Jaxon Evans.

A puncture for the lead Toyota saw Mike Conway take to the lane while the #98 Aston Martin suffered a heavy crash at Indianapolis.

Losing the rear of the car on entry to the high-speed complex, the LMGTE Am entry nosed into the barriers heavily to draw the first Safety Car of the race after four hours.

With three Safety Cars controlling the field, the top three runners in the race all found themselves caught in different trains, with Kamui Kobayashi well in control over Brendon Hartley with Nicolas Lapierre in the Alpine more than two minutes off the lead in third.

An off for Anthony Davidson in the #38 JOTA entry saw the LMP2 front runners in the gravel at the Dunlop chicane shortly after the Brit had taken the wheel of the car as they dropped well down the order while being recovered.