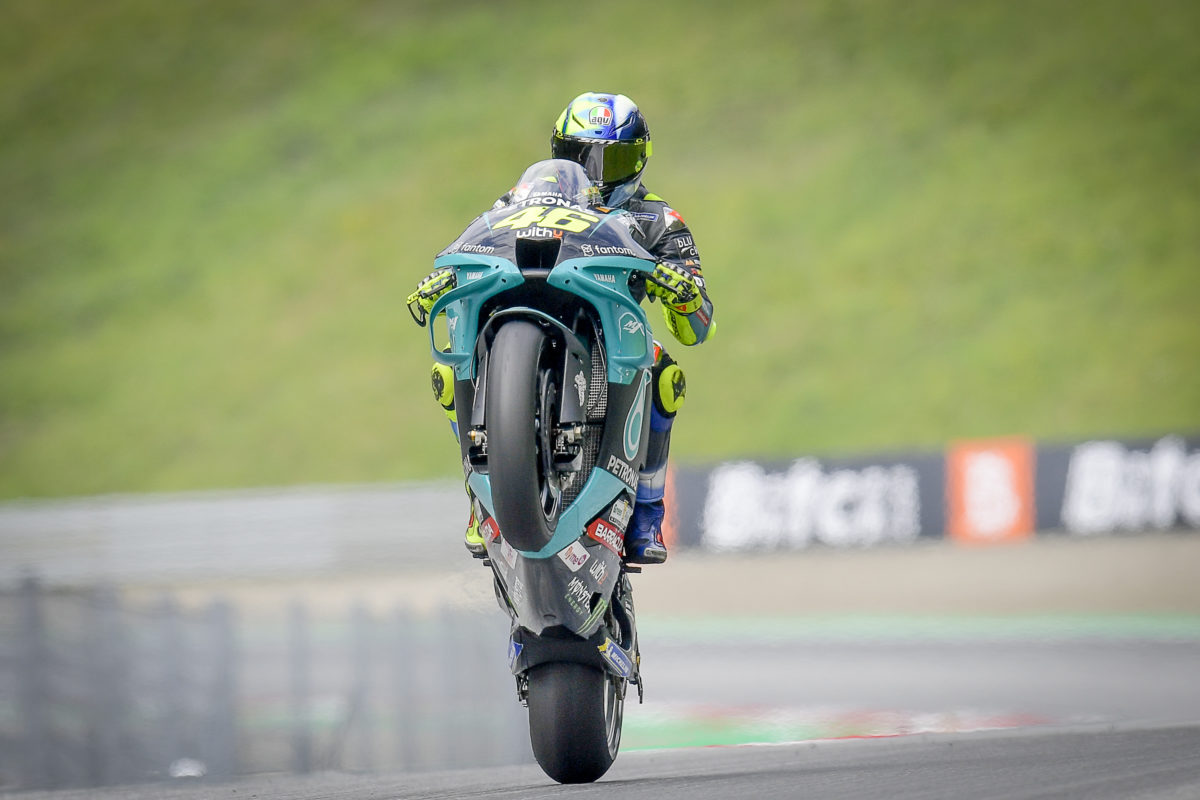 Valentino Rossi is open to a wildcard start in the 2022 MotoGP season but has no such plans right now.

Rossi announced upon return from the summer break that this year, his 26th in grand prix competition, will be his last as a rider.

The 42-year-old made that decision on the basis of his results so far in 2021, but had been mulling over going around for another season with his own VR46 team.

However, he might yet race in MotoGP beyond the seven rounds which remain on the current calendar.

Asked about the prospect of testing or even running as a wildcard during last weekend’s Austrian Grand Prix, Rossi said, “What I’ve learned in my career is ‘never say never’.

“So, at this moment I’ll say, ‘I don’t think so,’ because compared to Dani [Pedrosa] and Cal [Crutchlow], my problem is that I am older. But why not?

“I think that anyway I will miss riding the MotoGP bike, so maybe I can have a chance to try.

“For sure, it’s something that I will miss deeply, so why not?

“But at this moment, we don’t have any programme.”

Pedrosa impressed in a recent wildcard appearance with Red Bull KTM, having not raced since retiring and becoming one of the Austrian marque’s test riders at the end of 2018.

However, as Rossi referred to, the Spaniard is not quite 36 years of age.

Crutchlow is a month younger than Pedrosa and while he has seemed somewhat reluctant about competing, as a fill-in either at SRT or Yamaha Factory Racing, he only retired last year.

“For me, one story is to try the MotoGP bike in a test or in some private day,” added Rossi.

“But if [I undertook a wildcard], I would prefer some good track for me like Mugello, Misano, Barcelona, or Assen, I think.”

The seven-time premier class champion is likely to make more frequent appearances in car racing from next year, having dabbled in the past.

He has also spoken of a desire to start a family, and announced in recent days that partner Francesca Sofia Novello is indeed pregnant.

In the meantime, Rossi has a handful more chances to bring up his 200th MotoGP podium.

He came close in last weekend’s Red Bull Ring thriller, when several riders pitted for their wet weather bikes as the rain set in.

Having been 12th before the rain came, then third with just two laps to go but still on slicks, the SRT rider ended up eighth but was not disappointed.

“I decided not to stop because there were just five laps remaining and it was the right choice because I improved my position,” he said.

“At a certain point I was also on the podium so it was quite exciting, but the last two laps were difficult because we had more rain.

“Usually, you would never continue [on slicks] like this, but the rain started very slowly and if you enter the pits you lose one minute.

“At first, only Turn 3 and Turn 6 were wet, but the rest was dry still, so you could keep a good temperature in the brakes and in the tyres.

“But the last lap-and-a-half was very difficult because the bike started to spin everywhere and it’s very easy to make a mistake, so you need to ride very smooth. But at the end, not to stop was the right decision.

“It’s a good result. We take some points and it’s important for me and the team in a difficult moment.

“So, we go back home from the two Austrias that on paper are the most difficult weekends with a decent race and some points, so we are happy.”

With Franco Morbidelli out injured, Rossi has had three different team-mates in the last four races and could have a fourth in five, depending on Yamaha’s decision about Maverick Viñales.

The Iwata manufacturer is set to make a call on the future of Viñales, who has already signed for Aprilia and is indefinitely suspended by his current team, in the next 24 hours, reports Italian outlet GPOne.com.

If it is decided one way or another that the Spaniard will not ride an M1 again, Crutchlow could be shifted from SRT to Monster Energy Yamaha at Silverstone, which hosts MotoGP on August 27-29.

SRT Moto2 rider Jake Dixon would then likely become the latest fill-in at the Malaysian-owned squad, after Yamaha World Superbike rider Garrett Gerloff did so at Assen, just before the summer break.

Morbidelli is likely to miss the upcoming British and Aragon Grands Prix after re-injuring his left knee and undergoing surgery.