Quartararo thought about MotoGP title for first time in Austria

Quartararo thought about MotoGP title for first time in Austria 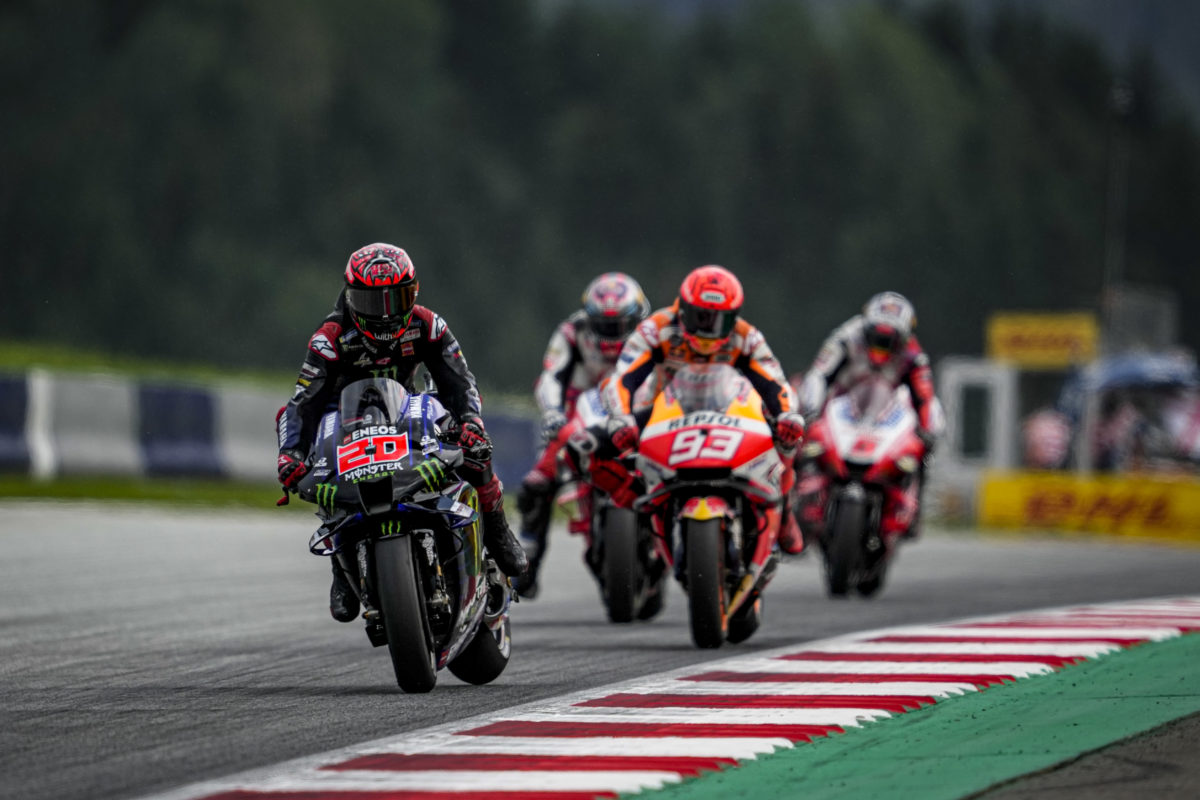 MotoGP championship leader Fabio Quartararo says the wild Austrian Grand Prix was the first time that he thought about the title race.

Quartararo finished seventh in the second race of 2021 at the Red Bull Ring but had been part of a vigorous, three-way fight for the lead before the rain set in.

Riding a Yamaha at a horsepower track, the Frenchman was extremely bold under brakes as he diced with Ducati’s Francesco Bagnaia and Honda’s Marc Marquez.

However, he was not prepared to take the risk that KTM’s Brad Binder did when the heavens did finally open in the final handful of laps.

Quartararo was among the leading quintet which pitted with three laps to go to switch to their wet weather bikes, meaning Binder inherited a lead which he would not relinquish as he somehow survived on slicks.

Asked about his decision to pit, #20 explained that he was trying to manage his risk given the bigger prize on offer.

“It’s the first time this year that I was thinking a little bit about the championship, I want to be honest,” said Quartararo.

“I have a lot of risk and I didn’t want to make a stupid crash.

“I nearly had one in Turn 1 when Marc crashed [after the pit stops], you can see on the TV that I almost touched him.

“Yes, it was the moment to think about the championship. We arrived with a 34-point lead at this track, we leave with 47.

“We take an advantage and I think we didn’t expect that.

“So, I think now our point is quite good in the championship, so I want to keep going in that way.”

As Quartararo noted, the pair of Red Bull Ring races was good to him despite the track being one which does not suit the Yamaha YZR-M1.

While he ended up only fourth of those who changed to wets, he was buoyed by his competitiveness in the dry.

“In the dry conditions I was feeling so good and I was just waiting and I think we saved so much, the tyre, that we had the possibility to do much better for the end of the race,” explained the 22-year-old.

“But anyway, our speed was there, we were here to fight for the victory in dry conditions and I think that was so important.

“So, I think that’s going to be important races, I think it’s seven or eight races remaining, so I’m taking it race by race and the next one is one of my favourites.”

The next one is Silverstone, where the British Grand Prix will be held on August 27-29.