Miller: Costly early stop in Austrian MotoGP ‘worth a shot’

Miller: Costly early stop in Austrian MotoGP ‘worth a shot’ 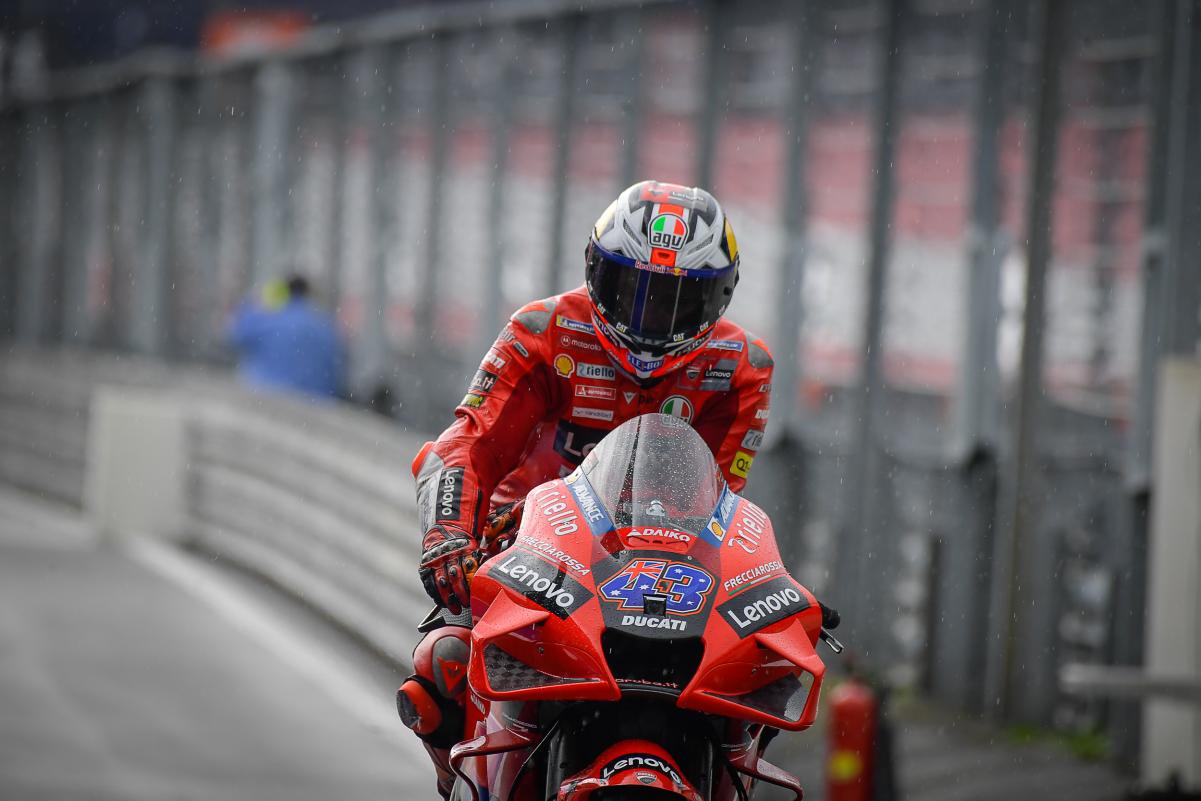 Jack Miller says that his ultimately costly decision to make an early switch from slicks to wets in MotoGP’s Austrian Grand Prix was “worth a shot”.

The Ducati rider had dropped to eighth when he and Suzuki’s Alex Rins, who was running a position further back, decided to switch bikes with five laps to go.

However, when the rain got heavy enough for the top five to choose to dive into the pits two laps later, they emerged ahead of Miller and Rins.

In the end, the latter pair’s strategy proved to be the worst overall, with Miller, regarded as a wet weather specialist, finishing 11th and Rins 14th.

On the other hand, Red Bull KTM’s Brad Binder won the race without stopping at all, while Miller’s factory team-mate Francesco Bagnaia and fellow Ducati pilot Jorge Martin rode from 10th and 11th with a lap to go to second and third respectively on wets.

“It looked like it was going to rain all race, and when it finally came down with about five laps left, I was eighth and had fallen off the back of the guys in front of me, so I came in to switch bikes for wets,” recounted Miller in his post-round column.

“Me and Alex Rins were in a lap before the guys up front, but it just didn’t quite rain enough for us straight away to make the most of the rain tyres.

“Once we were all back out there on wets, they had the advantage, so I turned eighth into 11th.

“Fabio [Quartararo] ran wide and Marc [Marquez] crashed from the first group, but the others all finished either on the podium or just off it.

“And Brad didn’t pit and he managed to win it on slicks! A ballsy call by him to stay out there and one that came off, for sure.

“Sure, I lost three points at the end there [difference between eighth and 11th] if I’d stayed where I was but it was worth a shot.

“I’d gone backwards in the dry from sixth on the start and it wasn’t really coming my way, so I didn’t have a lot to lose.

“I had to throw a joker at it, and I saw the rain at the top of the hill at Turn 3 and figured I had to try something just to see what happened, and then hope it would bucket down while everyone else was out there wobbling around on slicks.

“I was getting passed left, right and centre by that stage of the race so it was a bit of a Hail Mary to try to put matters back into my own hands.”

The result capped off a frustrating fortnight for the Queenslander at the Red Bull Ring.

Notwithstanding his podiums in the Austrian and Styrian Grands Prix last year, the Spielberg circuit is something of a bogey track for Miller.

He crashed out of the 2021 Michelin Grand Prix of Styria while chasing Quartararo in the battle for third, and seemed to be slightly shy of the leading group’s pace all weekend in the now completed Austrian round.

“I wasn’t unhappy with how I rode at all today, I actually felt I rode really well to the performance my bike was capable of,” added the Ducati Lenovo Team rider.

“I fought all the way but I just didn’t have the grip to stay with those guys up front at first.

“My pace was on the limit of my bike, but I could see they were keeping some margin, so I wasn’t unhappy with how I rode, not at all.

“But I was just lacking grip all in all, it was one of those weekends.

Miller sat fifth in the championship with 100 points to his name heading into the summer break and, despite only picking up five more points in the two events after it, he holds the same position in the standings.

Of those who had been closest to him on the way to the Red Bull Ring, Maverick Viñales did not score in the Austrian Grand Prix and was subsequent suspended by Yamaha, while Miguel Oliveira failed to make it to the chequered flag in either race.

Binder now holds sixth in the standings, seven points behind Miller, with the British Grand Prix next up at Silverstone on August 27-29.