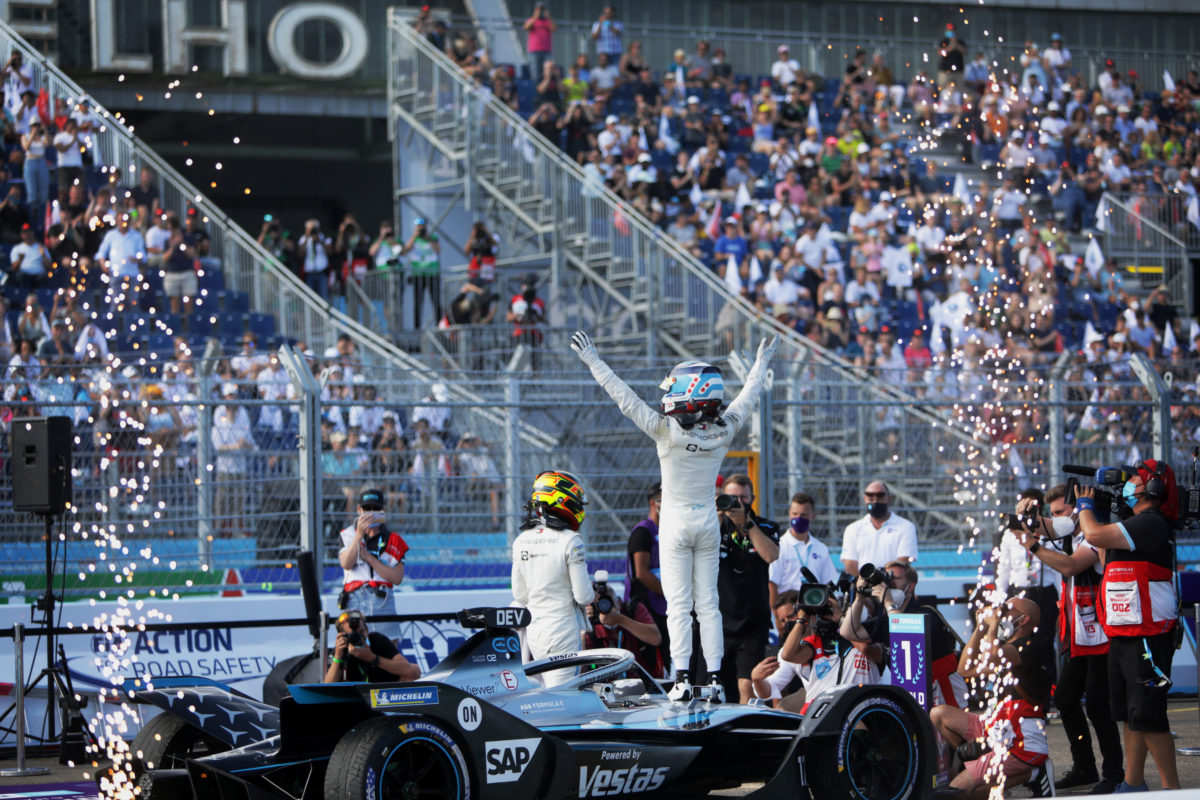 The Dutchman was one of 14 drivers mathematically in the hunt ahead of the final race, the Mercedes pilot surviving an encounter that saw four of his rivals eliminated.

Norman Nato won the affair, his first Formula E success, from Oliver Rowland and Stoffel Vandoorne, however early drama and the title fight left the result itself of secondary importance.

At the start, Edoardo Mortara clattered into the rear of Mitch Evans’ stationary Jaguar to draw the red flag.

While the former walked away from the incident, he was taken to hospital for further checks and was subsequently found to have suffered a fractured vertebra.

Soon after the restart, Jake Dennis suffered an apparent battery failure in the Andretti Motorsport effort.

Laying third in the championship heading into the race, the Brit cut a furious figure as he climbed from his car under a Full Course Yellow.

With Dennis out, and the retirements of Evans and Mortara, three of the leading four in the title fight were out of contention with points-leader de Vries in the box seat.

Vandoorne headed the field early in the race before ceding the spot to Nato following a three-way scrap that also included Rowland.

A crash for Antonio Felix da Costa saw his race, and outside championship hopes, end up against the wall after losing out in a battle with Lucas di Grassi.

Under the resultant Full Course Yellow, de Vries had found his way to fourth only to narrowly avoid clouting team-mate Vandoorne at the restart.

By the flag, de Vries had slipped to eighth while Vandoorne retained the final podium place behind Nato and Rowland.

With Formula E having been upgraded by the FIA this season, de Vries therefore also becomes the first Formula E World Champion.

“I’m lost for words,” said de Vries, who has been linked with a move into Formula 1 with Williams.

“It’s been such a tough season with highs and lows.

“Everything came down to the last race and I think we had a lot of fortune on our side today with everything that happened.

“I think we drove an incredible race, we had really good pace in the car, but at the same time, I felt like a target as well, it seemed like nobody was really respecting anything.

“So, at this point I just wanted to bring it home,” he added.

“My team were telling me to fight Jean-Eric Vergne, but I wasn’t sure why it was important, so I was getting frustrated that they didn’t want to tell me.

“Then the other drivers kept hitting me; left, right, front, rear.

“I wasn’t really happy with that, so I was a bit grumpy straight after the race. But now it’s starting to sink in.”

Mortara finished the year second, one point clear of Dennis in third and Evans a point further back in fourth.

A total of 12 drivers found themselves within a race win of the title at season’s end.

In the teams’ standings, Mercedes-EQ Formula E Team topped the table over Jaguar Racing, DS Techeetah edging out both Audi Sport ABT Schaeffler and Envision Virgin Racing for third – the three squads covered by a single point.