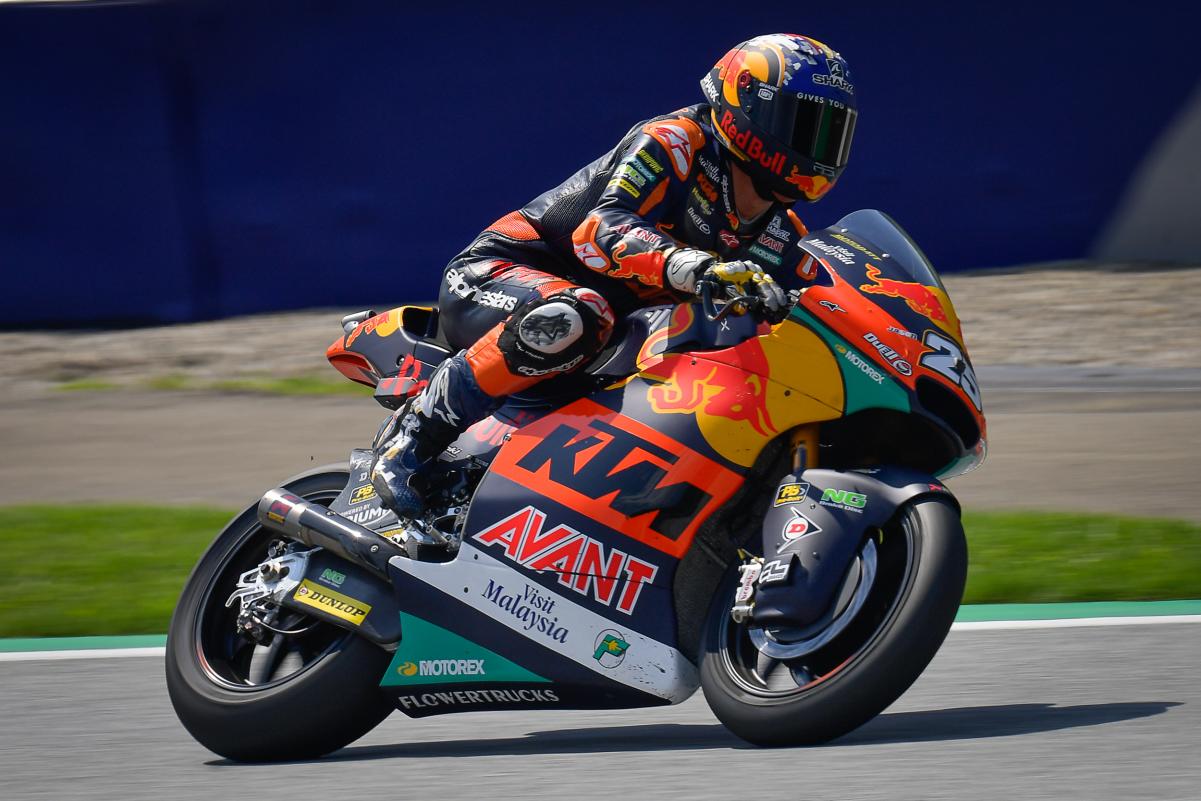 Raul Fernandez has eaten into Remy Gardner’s championship lead with victory in the Austrian Moto2 Grand Prix as his Australian team-mate finished seventh.

The Red Bull KTM Ajo duo continue to occupy the top two positions in the standings but Gardner’s advantage has been cut from 35 points to 19, largely as a result of him losing out at the first corner of the 25-lap race around the Red Bull Ring.

Ai Ogura kept Raul Fernandez honest for most of the way and while he could not convert his late threat into a victory, second for the Idemitsu Honda Team Asia rider represented his first podium in the intermediate class.

When the lights went out, Lowes led the field away from pole position, with Raul Fernandez following him up the hill on the opening lap from the middle of the front row.

Ogura emerged third from the Turn 3 hairpin, with Augusto Fernandez just behind, but Gardner had plummeted from fifth on the grid to beyond the top 10.

The Australian had been shuffled back as the pack converged on the first corner, but there was bigger drama just behind which caused Jorge Navarro (Lightech Speed Up) and Stefano Manzi (Flexbox HP40) to crash.

Several riders had run into each other and it was Cameron Beaubier (American Racing) who was pinged with a double long lap penalty over it.

Raul Fernandez took the lead when he went up the inside of Lowes at Turn 3 on Lap 3, as the top four began to break away.

Ogura put the same move on Lowes on Lap 5, and Augusto Fernandez on his team-mate on Lap 6, meaning #22 was down to fourth position.

Gardner briefly got back up to eighth but had spent several laps circulating in 10th position, one behind Marco Bezzecchi (Sky VR46) even though the Italian had started an unusually low 16th after crashing in qualifying.

Bezzecchi handed #87 another position when he ran wide at Turn 1 on Lap 7, as Ogura tailed Raul Fernandez at the head of the field.

Both Gardner and Bezzecchi, among others, gained another spot when Marcel Schrotter (Liqui-Moly Intact GP) went down at Turn 1 on Lap 9 while running fifth.

Raul Fernandez had an advantage of around half a second over Ogura as the contest moved past the halfway mark, while Gardner was making inroads on Aron Canet (Aspar).

He passed the Spaniard for seventh on Lap 14 at Turn 9, and again a lap later after Canet had regained the spot at Turn 4.

Raul Fernandez, Ogura, and Augusto Fernandez continued to all but match each others’ lap times, with several tenths splitting one from the next, while Gardner finally shook off Canet.

Ogura crept closer to the #25 Red Bull KTM Ajo machine and got the margin down to about three tenths of a second with a handful of laps to go, but the race-leading Spaniard responded.

Raul Fernandez put the hammer down to be 0.794s ahead at the start of the final lap and took the chequered flag 0.845s up on Ogura, making for an important victory as he seeks to catch Gardner in the title race.

Chantra was classified fifth after a big lunge at Vietti at the final corner, the latter prevailing in the drag race to the line but then being put back one position for exceeding track limits, while Gardner’s battle with Canet cost him any chance of progressing further from seventh.