Quartararo ‘not surprised’ at Viñales suspension

Quartararo ‘not surprised’ at Viñales suspension 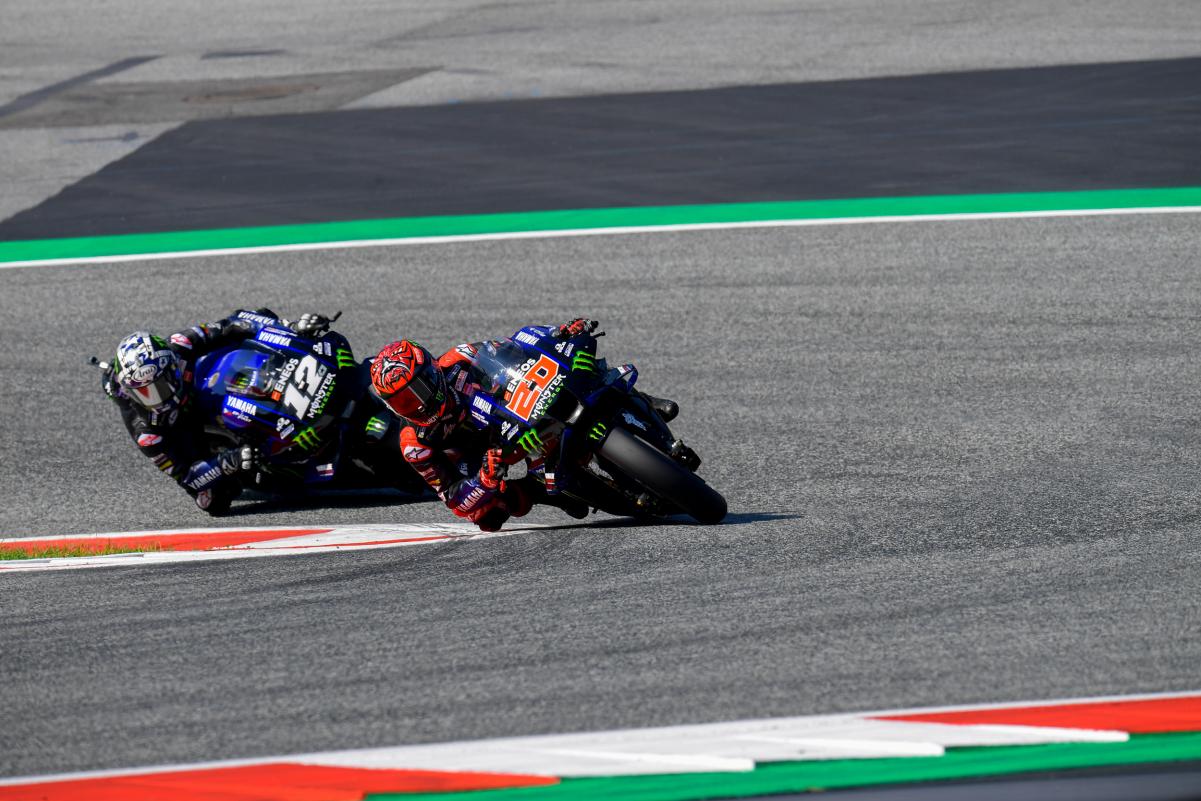 Fabio Quartararo says he is “not really surprised” that Monster Energy Yamaha MotoGP has suspended team-mate Maverick Viñales, ostensibly for “unexplained irregular operation” of his bike.

Quartararo will be the Iwata marque’s only factory rider in this weekend’s Austrian Grand Prix at the Red Bull Ring after the Spaniard’s entry was withdrawn.

Yamaha has not fully explained what it found in the days since the last race at the Red Bull Ring, although its statement announcing the bombshell decision did refer to the possibility that Viñales’ actions might damage an engine.

That squares with rumours that the nine-time grand prix winner, who was already on his way out of Yamaha at season’s end, deliberately over-revved his M1 during the Michelin Grand Prix of Styria.

Those rumours furthermore square with onboard footage now released by MotoGP which apparently showed Viñales doing just that on the final lap of the race at least three times, including when transiting pit lane to take the finish.

Why did Yamaha withdraw Maverick Viñales from the #AustrianGP? 👀

Ride on board with the Spaniard on the final lap 👇#MotoGP pic.twitter.com/h3hcntG5xj

Quartararo, who finished third in that race, was naturally reluctant to speak expansively on the matter in the pre-Austrian Grand Prix press conference, but did admit he was not surprised.

“Well, I have no proper comments,” said the Frenchman.

“I’m not really surprised, I think and I guess many people know what happened.

“And for me it’s no problem to ride alone. It’s difficult to say something, better to ask Yamaha people than myself but for me it won’t change anything on my weekend.”

Viñales had already grown so frustrated with the apparent inconsistency of his Yamaha package that he had obtained an early release from his contract just ahead of the summer break.

When that inconsistency reared its head again in the Styrian Grand Prix, he said post-race that he had “no confidence” in the team.

The 26-year-old had been competitive before the contest was red flagged, but ran near the back after stalling on the sighting lap for the restart, which he implied was due to a clutch problem.

Quartararo, on the other hand, leads the championship with seven podiums from the 10 rounds to date, and should have had another had he not suffered arm pump while leading the Spanish Grand Prix.

What has surprised him is just how quickly the relationship between Viñales and Yamaha has deteriorated.

“Honestly yes, honestly yes,” responded Quartararo when that question was put to him.

“All the bikes can improve in the areas we want to improve, but he won also the first race of the season,” he added.

“He was far back, he overtook, he pulled away. So, the bike is working well and is really consistent.

“So, I don’t know what happened honestly because the bike is great.

“Of course, we are missing a few things but it’s not dramatic, I feel like we have the potential to fight for the podiums, top five at least in the races we can.”

There is no word yet on when Viñales will return, if at all, with its announcement regarding the suspension concluding: “Decisions regarding the future races will be taken after a more detailed analysis of the situation and further discussions between Yamaha and the rider.”

There was already change in the Yamaha ranks with its test rider, Cal Crutchlow, continuing to fill in for the injured Franco Morbidelli this weekend at SRT, alongside Valentino Rossi.

Practice for the Austrian Grand Prix starts this evening (AEST).