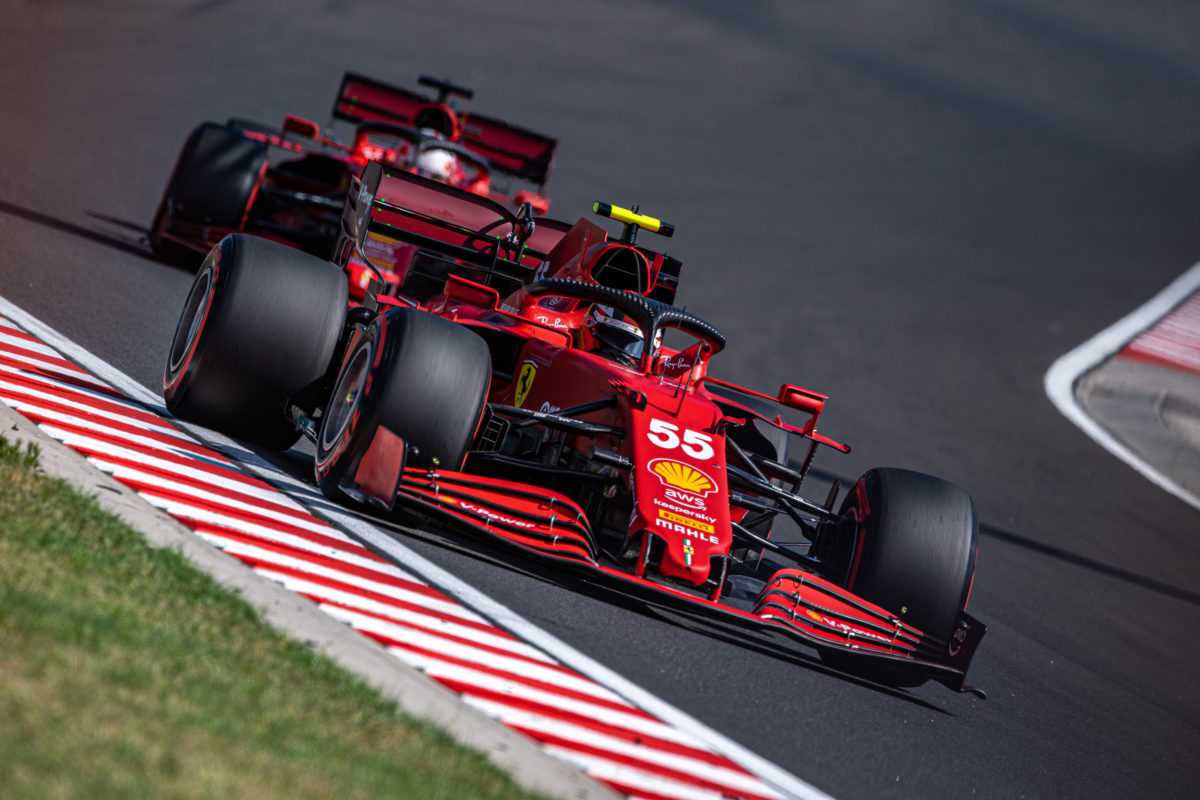 Carlos Sainz’s arrival at Ferrari has been something of the revelation of the 2021 Formula 1 season.

With steady rules from last year to this, drivers who’ve changed teams have tended to struggle.

That has been most evident at McLaren as Daniel Ricciardo finds himself unable to match Lando Norris.

Similarly, Sergio Perez has been unable to consistently maximise the pace in the Red Bull in comparison to Max Verstappen.

However, Sainz has bucked that trend, and sits just three points in arrears of Charles Leclerc after 11 races.

The Spaniard stood on the podium in Monaco and was classified third in Hungary (though wasn’t on the podium courtesy of Sebastian Vettel only being disqualified post-race).

Sainz’s arrival at Maranello has coincided with a general upturn in performance, with Leclerc suggesting his new team-mate is helping drive the team forward.

“It’s going very well,” he said when asked about the relationship with his new team-mate.

“We are very competitive both of us and whenever we put the helmet [on] we absolutely want to beat one another, but on the other hand we know how to work together whenever we [are] outside the car and this is great to see.

“I think it’s great for us because he pushes us forward but he also pushes the team forward.

“So the dynamic is very, very good.”

Leclerc admitted their on-track battles extend off-track, with a number of shared hobbies – much as Sainz had with Norris during the past two seasons at McLaren.

“We’ve got a lot of interest that we share, which is golf, padel… chess now is quite a big thing.

“And we’re as competitive as we are on track with those things, so I’m enjoying it.”

Leclerc’s own season has seen him secure two pole positions, though a crash during qualifying subsequent to his hot lap in Monaco saw him fail to take up his front-row start.

He then came close to victory at Silverstone, falling a couple of laps short as Lewis Hamilton charged back from a 10-second penalty to claim his eighth British Grand Prix win.

Between he and Sainz, Ferrari sits third in the constructors’ championship – level on points with McLaren but ahead on countback (more second places).

The 2021 F1 season resumes with the Belgian Grand Prix at Spa-Francorchamps on August 27-29.