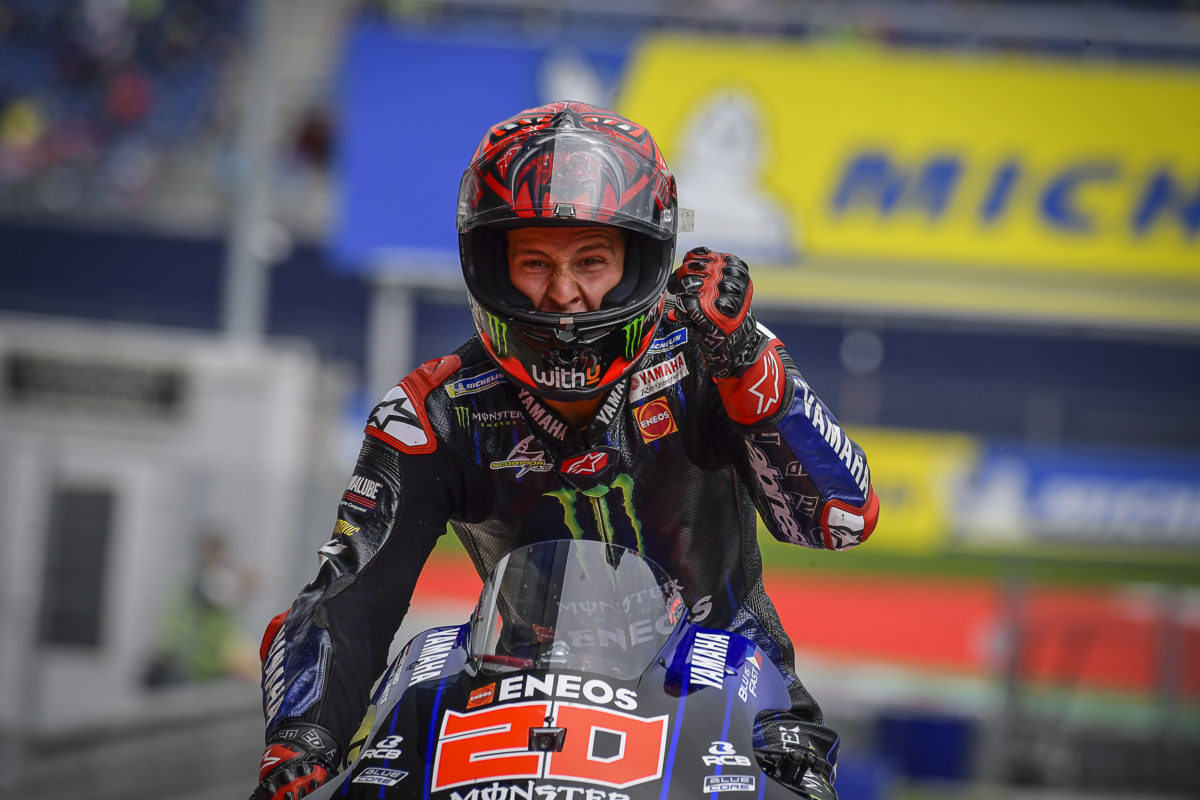 Championship leader Fabio Quartararo believes his three third placings are more important than the four wins he has taken to date this MotoGP season.

The Monster Energy Yamaha rider is 40 points, or 1.6 races, clear of the chasing pack after picking up another podium in Round 10 of the campaign, the Michelin Grand Prix of Styria, last weekend.

That event was contested at Austria’s Red Bull Ring, a track which is regarded as one suited to Ducati and KTM, and so it was that Jorge Martin won the race on a ‘Bologna bullet’ fielded by Pramac Racing.

Quartararo finished third, having held factory Ducati rider Jack Miller off long enough for the Australian to drop the front of his Desmosedici through the sweeping Turn 7.

The Frenchman had also skipped out to a sizeable lead early in the 2020 campaign after winning both Jerez races, but ended up eighth on the table at the end of the season.

Then riding for satellite team SRT, although on a factory-spec M1, Quartararo bagged a total of three victories but his next-best result was a single fourth, and next-best after that was one seventh.

Aside from the seven podiums so far in 2021, his results have been fifth in the Qatar Grand Prix, 13th in the Spanish Grand Prix when he suffered arm pump while leading comfortably, and sixth in the Catalan Grand Prix having been classified fourth before copping a second time penalty, for the infamous bare-chested finish.

“I think it’s important,” he said of the third placing last time out.

“For me, coming into these Austria races, I knew that Joan [Mir, Suzuki] is always super-fast here, but also Ducati.

“I was not worried because I know that we make quite a great job in the past races, we have some points of advantage [ie championship lead], but to make a podium is so important.

“I think more than my victories this year is more about the three third positions that I did; the Sachsenring [German GP], in Le Mans [French GP], and here [Styrian GP].

“So, I think that’s the difference compared to last year. Last year was win or P15, so the consistency is improving and I think that’s how you win a championship.

“Joan last year was the most constant, he was extremely fast, and I think it’s great to take this like an example for the consistency.”

As Quartararo alluded to, Mir won the 2020 title with just one grand prix victory, and even that only came in the race before he sealed the deal.

The Spaniard finished second in the Styrian Grand Prix, his first riding with Suzuki’s new rear ride height device, with rookie Martin opening his account in the premier class.

Quartararo was satisfied with his efforts given he “couldn’t do better” than third, even if he did give up ground to Martin and Mir when he became embroiled in a battle with Miller. Quartararo on track at the Red Bull Ring

“It was tough because, when I was behind Jack [Miller], even the small mistake in Turn 1 was the only way for me to stay behind him in the straight,” said #20.

“I knew that in Turn 3 I was struggling a lot all weekend but today [race day] and yesterday I was pretty strong and in the first race [before a red flag] I could overtake Marc [Marquez], then I overtake Jack and make a little bit of a nice fight.

“So, I’m really pleased for this podium, and we know in which area we need to work on, so, really happy, and I think that we have made a great job.”

As to what area Quartararo and Yamaha needs to improve on, ahead of another race at the Red Bull Ring this weekend, the 22-year-old identified their not uncommon problem of poor rear grip.

“I think it’s pretty clear, I think that rear tyre is something that we need to improve,” he said.

“In the first race behind Jorge, I was dead behind and in the last corner I was carrying so much speed and I was looking at him and it was like, ‘He’s saving a lot, the tyre.’

“As soon as he picked up the bike, he was pulling a lot.

“We tried to manage the best way as possible – we know we don’t have the same potential as Ducatis on acceleration – but I mean, for us, a podium here was perfect.

“I think our pace in the practice is really good, but when the race arrived, we don’t feel the same with the rear tyre.

“I think that knowing that for the next week is something important, and I think that it’s going to be good to have these three, four days break to think about how we can work on the bike and my riding style.”

Team-mate Maverick Viñales also pointed to rear grip as an issue after a horrific run to 19th in ‘Race 2’, having been competitive before the red flag was called due to the fiery Dani Pedrosa-Lorenzo Savadori crash.

Viñales, who has already been granted an early release from Yamaha at season’s end, declared he has “no confidence” in the team given the apparent inconsistency of his bike.