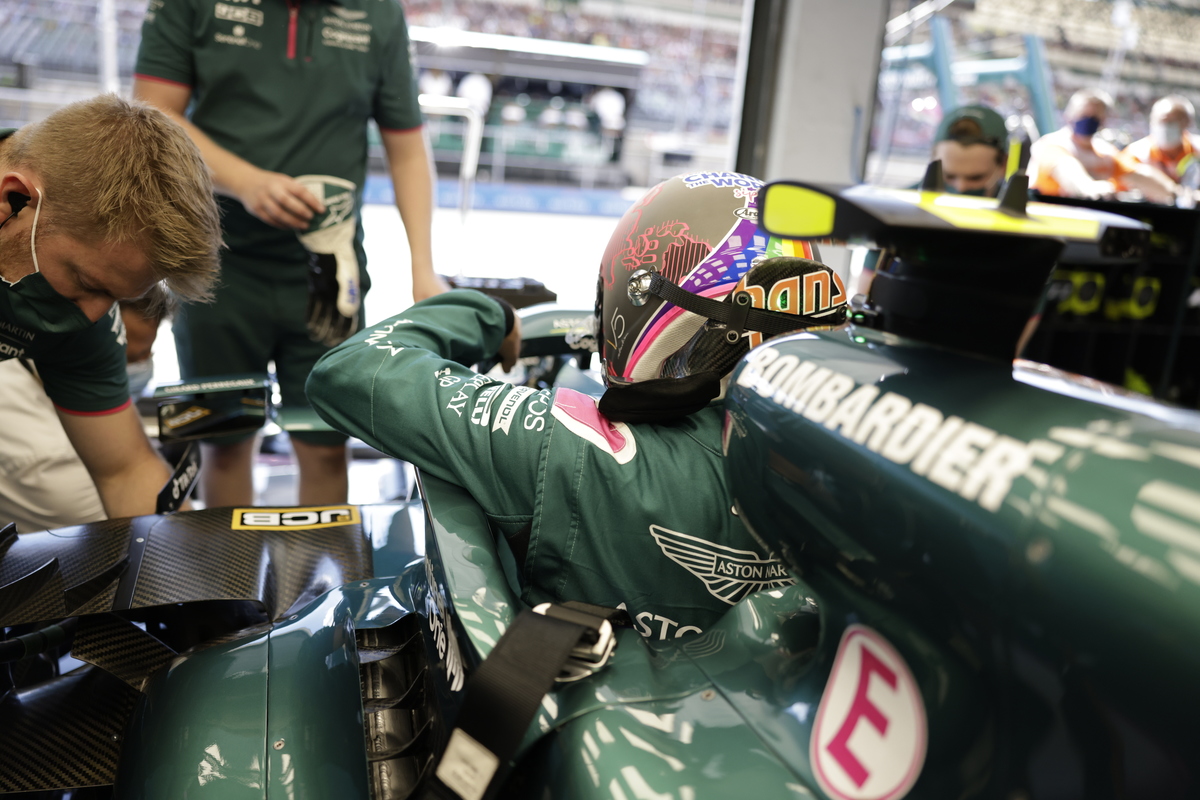 Sebastian Vettel climbs aboard his AMR21

In passing down its decision to deny Aston Martin a review of Sebastian Vettel’s exclusion from the Formula 1 Hungarian Grand Prix, the FIA has explained its rationale.

Vettel crossed the line second in Hungary though in post-race scrutineering officials were able only to extract 0.3 litres of fuel for testing, short of the 1.0 litre the regulations state must be available.

Soon after the exclusion was announced on Sunday evening (local time) in Hungary, Aston Martin announced its intention to both appeal and exercise its right for review.

While the appeal is, as yet, unheard, the FIA has both heard and dismissed the right of review.

Granted to all teams, under certain circumstances, a decision made by officials can be reviewed should they be able to provide new evidence not available at the time of a decision.

This has recently been used by Red Bull over the incident between Max Verstappen’s and Lewis Hamilton, and prior to that Alfa Romeo for Kimi Raikkonen’s unusual Safety Car restart during the Emilia Romagna Grand Prix.

The key aspect is that new evidence must come to light, though even then officials can elect not to review an incident.

In Vettel’s case, stewards were satisfied there was a ‘new’ element, though still opted against the review.

“The alleged ‘New Evidence’ was derived from analysis of more than 100 channels of fuel system related data,” the stewards’ decision noted.

“It concludes that there was a fuel system failure in Car 5.

“As a result of the loss of fuel cell pressure, the air pump in the fuel cell activated a maximum output.

“By pumping air through the fuel cell, a significant amount of fuel was inadvertently discharged from the fuel cell of Car 5.

“As a result of that, it was only possible to obtain a 0.3 litre sample of fuel, significantly less than the volume that was expected to have remained.

“Failure of the Fuel Cell Pressure relief valve to seal is the prime suspect but any leak path from the fuel cell would have caused the loss of fuel pressure and resulted in the loss of fuel.”

Given this, stewards had to decide exactly what was ‘new’; the telemetry data itself, or the analysis thereof.

“The telemetry data itself was available immediately after the race,” stewards reported.

“However, Aston Martin has admitted that a careful analysis, interpretation and evaluation of this data was only possible significantly later because of the sheer volume and complexity.

“In any case, the analysis carried out by Aston Martin brought a new element to light, namely the conclusion that there was a fuel system failure which would have resulted in the ejection of fuel during the race.”

It meant that, at this point, Aston Martin had at least cleared the first gate in having the incident reviewed; it had been declared that the team had provided ‘new’ evidence.

However, officials must then determine its relevance, and Vettel’s instance made specific note of the technical regulations and requirement for fuel samples.

Paraphrased, officials noted that those mandate that “at any point in time after the race, a one litre sample of fuel may be taken from the car.”

In Hungary, Aston Martin claimed another 1.44 litres of fuel must be in the system, a figure calculated by using the Fuel Flow Metre and the known fuel level in the car before the race.

“However, as Aston Martin now explain, an analysis of various data carried out after August 1, 2021 showed that there was actually less than one litre remaining at the end of the race due to an initially unnoticed malfunction in the fuel system.”

A potential fuel system failure was not taken into consideration by officials when excluding Vettel in Hungary, a point in line with Articles 6.6 and 6.6.2 of the technical regulations which state only that one litre of fuel must be available.

There is, under the regulations, no provision to cover for a system failure or leak; the fuel must be extracted, or the car must be excluded.

“Therefore, for the assessment of whether or not the one-litre requirement was broken, it does not make a difference why there was less than one litre,” the stewards declared.

“There may be a couple of explanations why at the end of a race the remaining amount is insufficient.

“In order to be able to affirm a ‘relevant’ fact, Aston Martin would have had to present facts that actually more than one litre of fuel was remaining.

“The explanation why this requirement could not be met is not relevant to the decision as to whether a breach of the regulations has occurred.”

Aston Martin’s right to review therefore fell down at the second hurdle; its new evidence was not regarded as relevant.

“The Stewards do not accept Aston Martin’s reference to examples of decision making by the FIA where the approach has reflected compliance with the purpose, but not the wording of the Sporting and/or Technical Regulations,” the report outlined.

“These are different cases where for instance car accident damage results in replacing parts or adding weight due to the loss of parts during the race.

“As long as such exemptions are not mentioned expressively in the written regulations, the Stewards have to follow the wording.

“Based upon these points a right of review as detailed in Article 14 of the ISC must be denied for reasons of admissibility.”

With the review avenue now closed, Aston Martin’s hopes of regaining second place in Hungary rest on an appeal over the exclusion.

How that will unfold, given the fuel system failure argument has already been discounted, is unclear.