Martin: ‘The potential is there to do great things’

Martin: ‘The potential is there to do great things’ 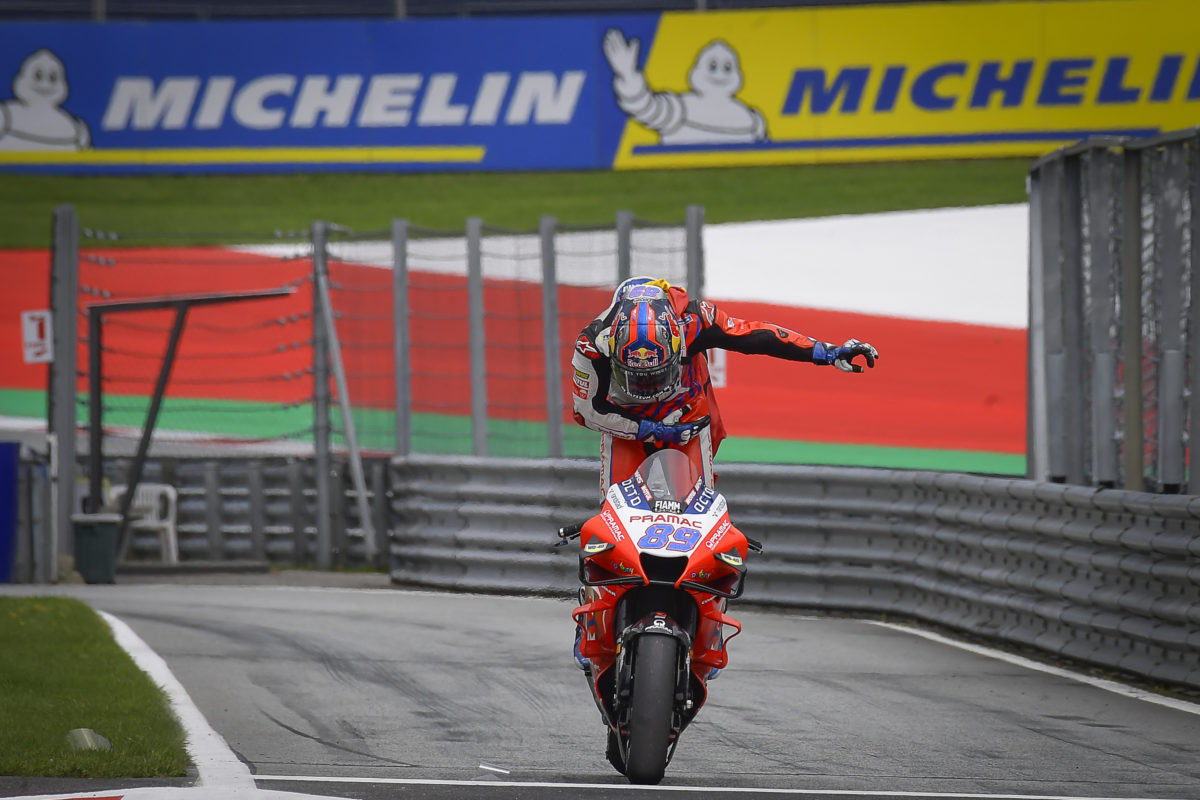 Rookie MotoGP race winner Jorge Martin says “the potential is there to do great things” even if he does not want to think too far ahead.

The 23-year-old Spaniard saw off pressure from 2020 champion Joan Mir to take a maiden victory for both himself and Pramac Racing in the Michelin Grand Prix of Styria, at the Red Bull Ring.

Being a Pramac rider, Martin is directly contracted to Ducati and is considered a star of the future, as evidenced by his pole position two rounds into the season at Qatar’s Losail, and that which he has now converted into a win.

The 2018 Moto3 world champion in fact has only six MotoGP race starts under his belt after sustaining multiple fractures in a practice crash at Portimao, where Round 3 of the campaign unfolded.

However, Martin did not expect to deliver a victory, even after qualifying on pole.

He is also grounded, but hopeful, about the thought of becoming a MotoGP champion in the future.

“I didn’t think too much about this,” he said.

“I just wanted to improve every race and actually we are doing it.

“For sure, the start in Qatar was great, and for sure there was a possibility to win, but I wasn’t confident enough or maybe strong enough to do it.

“After the crash in Portimao, all my focus was in this race – not just this one but also next week – because I know it was a strong race for Ducati and it was our best track of the year, so I think here was the place to do it and I was fully focused on my target.

“Even today before the race, I didn’t expect to do this, but finally I could do it.

“About the future, next week, for sure, we have another chance. I still think we have some points of the track where we can improve, maybe one and two tenths.

“About the next years, I don’t want to think. I mean, it’s still my sixth race in MotoGP. “For sure, the potential is there to do great things, but nowadays in MotoGP, there’s a lot of level [high level of competition], all the brands are working so hard, and you cannot stop.

“But, I know Ducati’s not stopping, they are working so hard, and I feel like I am in the right place for my riding style and for how I ride, so I am really happy and confident for the future also.”

As good as Martin’s performance was, there was also an element of good fortune.

A red flag for the Dani Pedrosa-Lorenzo Savadori crash saw the original race called off on Lap 3 and, while #89 was running second at the time, he said he was struggling with his front tyre.

The stoppage and full restart allowed Pramac to change Martin’s tyres, and he took the lead off Ducati stablemate Jack Miller on Lap 4.

Mir cleared Miller shortly after and tailed the rookie for some period of time, before Martin crept away and ultimately prevailed by 1.548s.

“In the first start, I felt okay, but I had a lot of moments with the front tyre, so, luckily, they stop the race,” recounted the winner.

“I hope Savadori is OK, but luckily I could change both tyres and I felt super good on the second start.

“As soon as I could, I took the lead, trying to put my pace, because I knew today was a race to just be constant over the race, and I could keep this 24.3, 24.4 all the race.

“Joan was super strong today but when I saw the gap of two tenths on the [pit] board, I just tried to put a little bit more on the track.

“Making this gap was perfect for me and necessary also because, in the last laps, my physical condition wasn’t great.

“But, really happy for my team and also Ducati because here is so important to win for them.

“I wasn’t expecting to be the rider to win but, finally did it, so super happy and I hope to enjoy this week.”

Martin is now 12th in the championship on 48 points, more than double his tally before the Michelin Grand Prix of Styria.