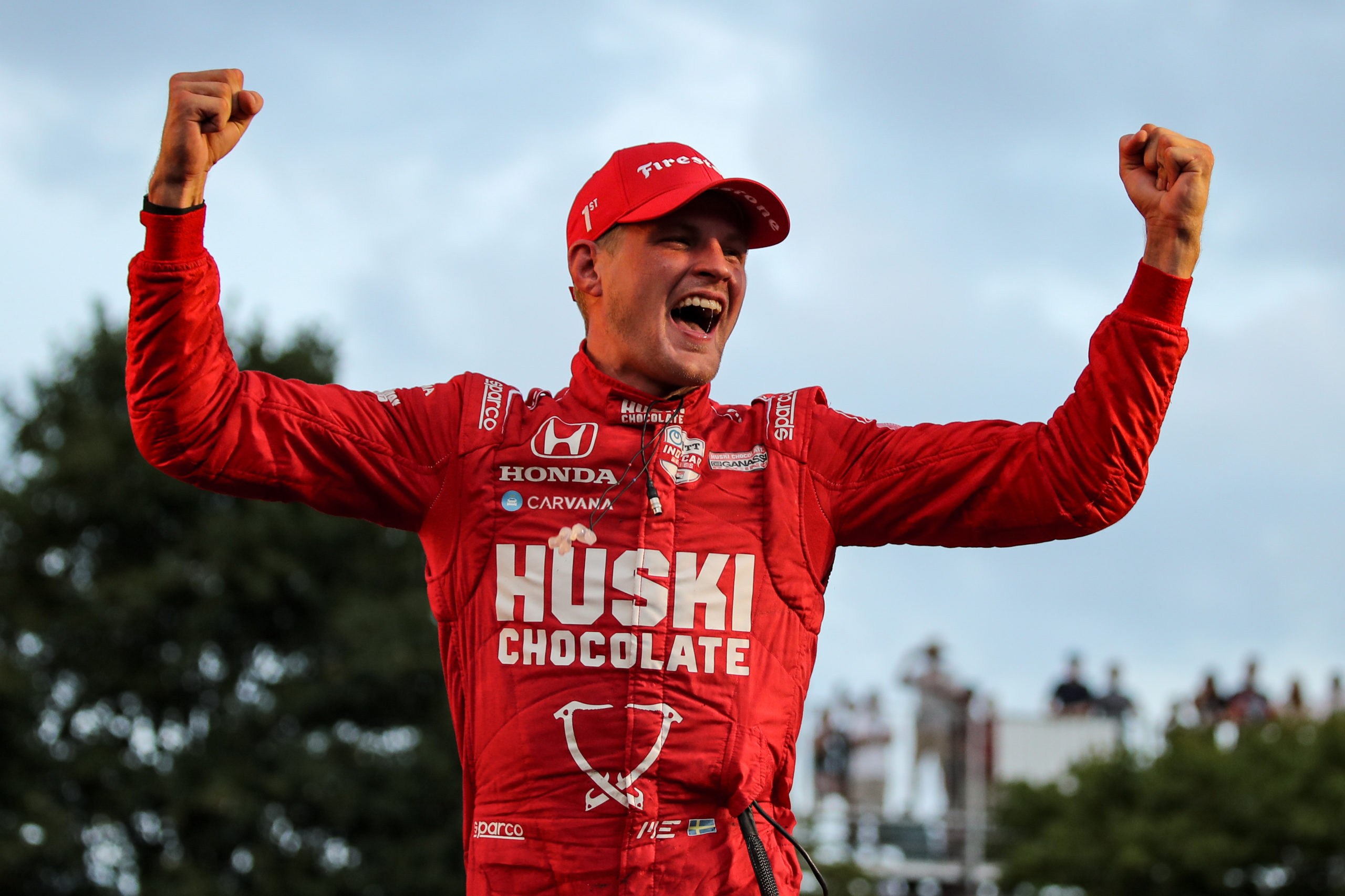 Marcus Ericsson has come back from an airborne crash and subsequent stop-and-go penalty to win the inaugural Big Machine Music City Grand Prix.

It was an epic comeback effort for the ex-Formula 1 driver, who collided with the back of AJ Foyt Enterprises driver Sebastien Bourdais on Lap 4.

The contact launched Ericsson skyward, crashing down to the ground with little more than front wing damage.

Despite the contact and subsequent penalty, the Swede ultimately led his Kiwi team-mate Scott Dixon to victory in a Chip Ganassi Racing one-two finish.

“This is unbelievable,” said Ericsson.

“It just shows in IndyCar anything can happen, you can never give up, and if you have a good team and good car you can still get to the victory lane.

“This one is for the guys, they repaired the car… and to get a one-two for Chip as well is amazing.

Ericsson’s win almost wasn’t to be after a storming drive from Andretti Autosport’s Colton Herta, who dominated the first half of the race.

The 21-year-old was late to make a pit stop under the yellow flag, dropping to the back end of the top 10.

A late charge saw Herta make his way to second and threaten Ericsson for the lead, only to crash at Turn 9 in the closing stages.

“I had a very big fuel number I had to hit and Colton was so fast as we saw all weekend,” Ericsson added.

“To keep him behind with a lot of fuel saving was one of my best performances of my career actually.

“I’m sorry he ended up in the fence there, he should be on this podium, but I’m just so proud of the whole team. They’ve done such a good job and I’m so thankful.

“I want to apologise also to Seb there in the start, there was an accident, I thought it was green and I went and I couldn’t see that he stopped so I’m really sorry for that.” 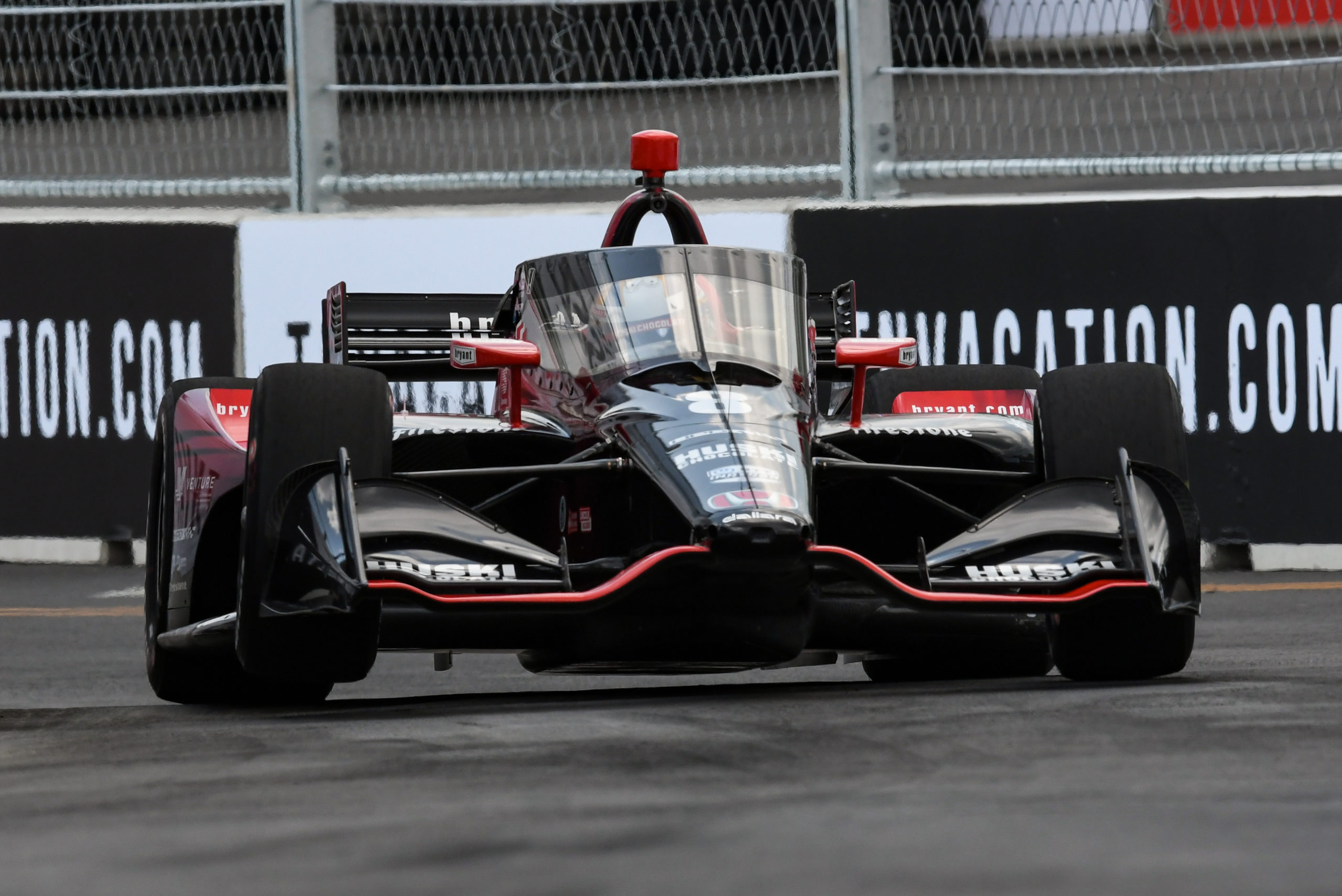 As the cars came to the opening green flag, it was Andretti Autosport’s Alexander Rossi who made a strong start to usurp second-placed Dixon into the first turn.

Despite fears of carnage on the first lap, the field made it through the opening sequence of corners.

However, it wasn’t long before the yellow flag flew as Dalton Kellett (AJ Foyt Enterprises) came to a halt out of Turn 4.

Following a brief intermission, the race restarted on Lap 4, albeit, only briefly. In a bizarre incident, Ericsson slammed into the rear of Bourdais as they came to the green flag.

That launched Ericsson into the air, and despite the damage to both cars, the yellow flag wasn’t immediately drawn.

In the subsequent melee, several cars were baulked by the damaged duo slowly making their way back to the pit lane.

Among them was Josef Newgarden (Team Penske) who had already lost a handful of positions on the opening lap after getting into the wall following contact with Graham Rahal (Rahal Letterman Lanigan Racing).

The yellow flew again on Lap 5 with debris strewn across the circuit.

Despite the heavy impact, Ericsson was able to receive a new front wing and carry on unabated. Bourdais, meanwhile, was forced to retire. Ericsson would receive a stop-and-go penalty for his troubles.

Herta quickly stretched his legs over Rossi, though his three-second lead quickly vanished when Scott McLaughlin (Team Penske) was spun around courtesy of contact from Ed Jones (Dale Coyne Racing with Vasser-Sullivan).

With McLaughlin’s car stalled, the yellow flag was drawn for a third time. Fortunately, the Kiwi was able to get his car restarted and rejoined at the rear of the field in 25th.

Several drivers took the chance to pit on Lap 17, including series leader Palou from ninth to come to the lane. He was followed by Ryan Hunter-Reay (Andretti Autosport), Hinchcliffe, Newgarden and McLaughlin.

In another bizarre incident, Team Penske team-mates Pagenaud and Will Power collided on the restart at Turn 3.

As the field baulked coming to the green. Power tried to sneak his way down the inside of Pagenaud, resulting in contact and the Frenchman nosing into the outside tyre wall.

In the resulting melee, Cody Ware (Dale Coyne Racing with Rick Ware Racing) punched the back of Johnson, resulting in the Chip Ganassi Racing driver spinning out.

With Johnson stopped and his left rear tyre punctured courtesy of a secondary hit from team-mate Palou, the track quickly became jammed.

The race was soon red-flagged with Pagenaud, VeeKay, Sato, Newgarden, Hunter-Reay, Hinchcliffe, Johnson, Palou, Ware, and McLaughlin all parked up.

Sato and VeeKay were among those unable to take the restart while Johnson was disqualified due to his team working on his car under red flag conditions.

The race resumed on Lap 24 after the lengthy red flag intervention.

Herta’s pace was such that he stretched his advantage over Rossi to 3.5s after one lap.

Having returned to the race with a wounded car, VeeKay crashed for a second time at the chicane on Lap 31 bringing out yet another yellow flag.

Herta led the field to the pit lane on Lap 32 which jumbled the field after a handful of those in the mid-pack pitted under green.

That promoted Ericsson to the lead followed by Hunter-Reay and Herta. Rossi was fourth with Hinchcliffe, Newgarden, Dixon, Daly, Rosenqvist and Harvey in tow.

Amid some confusion as to where cars hit the timing and scoring line, the order was reshuffled in parts with Herta dropping in behind Hinchcliffe and Dixon behind Daly.

The field came to green on Lap 36, and despite being dropped to fourth on the rest, Herta was quick to dispatch Hinchcliffe. Herta continued to make headway, passing Hunter-Reay moments later.

At the halfway point it was Ericsson from Herta, Rossi, Hunter-Reay, Hinchcliffe, Newgarden, Daly, Dixon, and Grosjean.

Incredibly, Power found himself involved in another incident with a team-mate, this time making contact at Turn 9 with McLaughlin.

The New Zealander spun around and was subsequently hit by Kellett.

Herta was the sole frontrunner to stay out under the yellow as Ericsson, Rossi, Dixon, Hunter-Reay, Hinchcliffe, Rahal, Power, and Palou pitted.

With the field cycled through, it was Herta who led from Newgarden, Daly, Harvey, Grosjean, O’Ward and Pagenaud who all elected not to pit. Ericsson was the first in line of those who had stopped with Rossi and Hinchcliffe in arrears.

Drama struck on Lap 51 when O’Ward and Rossi got together at Turn 9. Rossi was able to continue while O’Ward stalled, bringing out yet another yellow flag.

Under the caution, Newgarden, Daly, and Harvey pitted, putting Grosjean to the lead ahead of Ericsson, Hinchcliffe, Dixon, Hunter-Reay, Rosenqvist, Ware, Rahal, Herta, and Castroneves.

Come Lap 55, the yellow flew for the eighth time as Ware spun on his own out of Turn 6.

Racing resumed on Lap 58 with Ericsson heading the field after Grosjean pitted from the lead.

With 19 laps to go, Dixon ceded position to the hard-charging Herta, who soon set about chasing Ericsson for the lead.

While the young American was quick to dispatch the top 10 runners, Ericsson’s straight-line speed was supreme across the bridge.

Herta was fortunate not to end up in the wall after a lunge on Ericsson saw the 21-year-old lock up and nearly nosedive the concrete at Turn 9.

His bid to get by Ericsson would ultimately come up short though as another mistake at the high-speed Turn 9 resulted in Herta hitting the wall hard.

That drew the final yellow flag of the race, which would turn red as IndyCar Series organisers took their time to adjust the concrete wall.

That set up a two-lap dash to the chequered flag. Ericsson was unchallenged in the end, crossing the line to win by 1.5s over Dixon.

Hinchcliffe claimed a season-best third with team-mate Hunter-Reay in fourth. Rahal was fifth with Jones a late charger to sixth.

Points leader Palou maintained his advantage in the title race with seventh while Rosenqvist, Castroneves, and Newgarden completed the top 10.

Power wound up in 14th while McLaughlin finished 22nd and 13 laps down on the lead.

It’s a quick turnaround for the IndyCar Series, which heads to Indianapolis Motor Speedway on August 12-14 for the Big Machine Spiked Coolers Grand Prix on the famed Brickyard’s road course configuration.