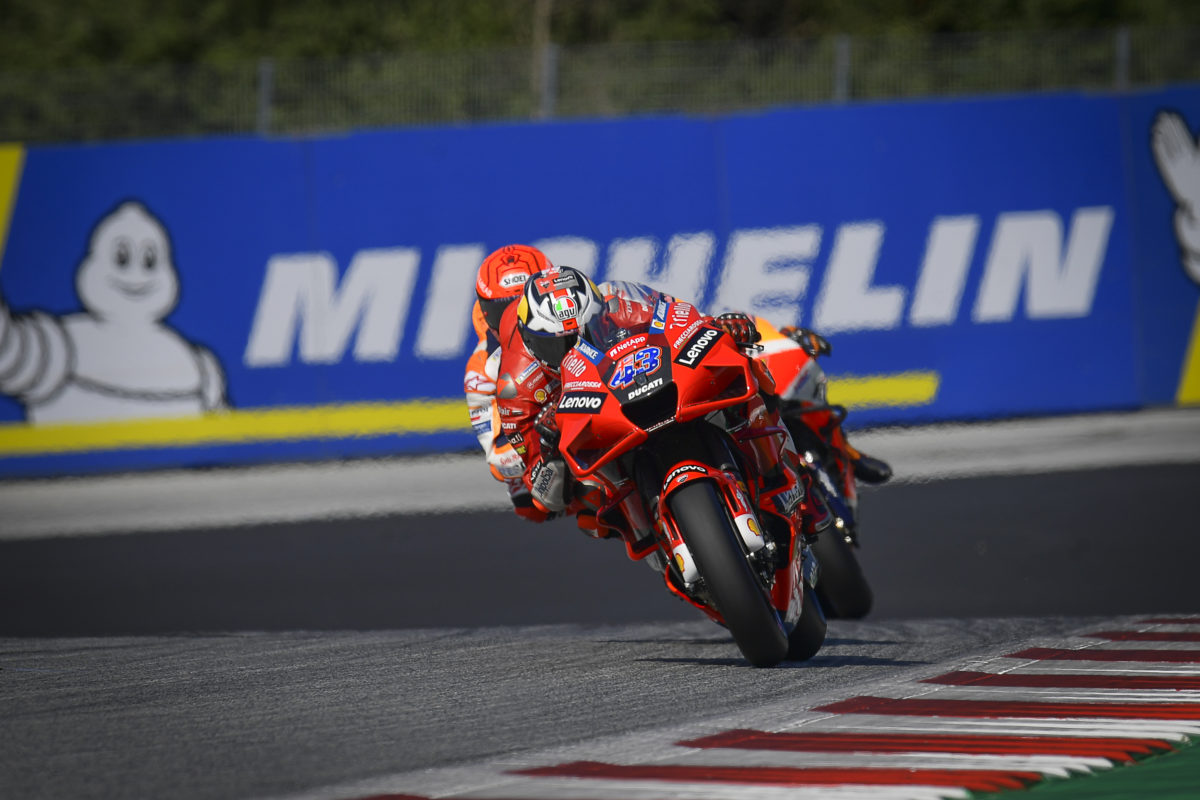 The Queenslander was second to Quartararo at the end of the first runs in Qualifying 2 but was unable to improve on his 1:23.300s when he went onto the circuit again.

“I was able to pull out a lap on the first run in the quali,” recounted Miller.

“I missed the second tyre; it was a great tyre, I felt like I had everything, all my ducks were lined up, but I just kept making stupid little mistakes, just pushing a little bit too hard.

“Here’s one of those tracks that you can get sucked into braking a little bit too late.

“You’ve got to find that really fine margin, let’s say, of not being too late but not being too early, and also getting enough exit because you carry the speed a long way – for example, from [Turns] 1 to 3, up the hill – so I would have liked a little more.”

Counting in the Ducati Lenovo Team rider’s favour is the unpredictability of the weather in Spielberg this weekend.

While Saturday’s MotoGP running was dry, Free Practice 2 on Friday afternoon began with rain before a dry line emerged.

Miller was the only rider to try slicks in that session and while the track had not dried enough such that he could go faster than his own best, he gathered useful intelligence for a potential flag-to-flag race.

“Second row – head of the second row – I think we can get away to a good start from there, and see what the weather’s doing,” he added.

“[Friday] felt quite well – as good as you can, let’s say – in the wet conditions, and also in the drying conditions.

“I put some slicks on and it was a little dodgy but I was able to do a couple of laps in and sort of understand what I need to do and how I need to work the bike to make the slicks work, in half-and-half conditions.

“So, I think we’re in for a good shout, but we just have to wait and see.”

Miller also hinted that he may have been trying new parts until matters got particularly serious on Saturday afternoon, with this weekend’s round the first after a five-week summer break.

“We had to do quite a bit this weekend,” revealed the 26-year-old.

“First of all, [because it has been] five weeks off the bike, but also we had a few items we had to get through, and I’ve been pretty occupied, let’s say.

“So, it was nice in FP4 to just forget about that and focus on what we need to do because, at the end of the day, we’re still riding for this championship, and just focus on putting some pace together.”

Martin’s pole is the second of his rookie MotoGP season in just six attempts, having missed four due to injury.

The Pramac Racing rider set a new all time lap record at the Red Bull Ring in wheeling his Ducati to a 1:22.994s, 0.044s quicker than Bagnaia went on a factory-entered Desmosedici.