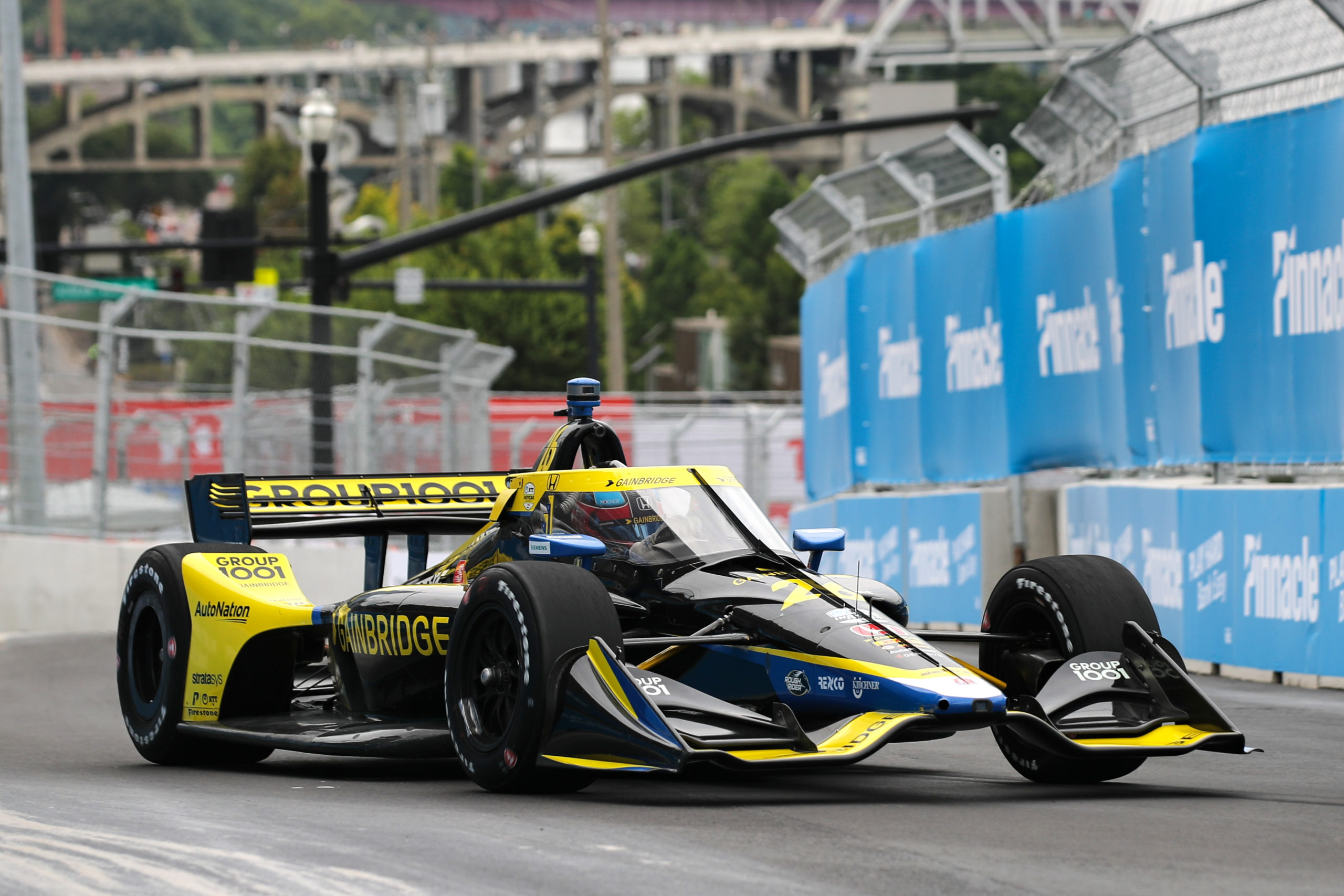 Colton Herta converted his practice pace into pole position for the inaugural Big Machine Music City Grand Prix with a blistering lap half a second quicker than his nearest rival.

The Andretti Autosport driver made it through to the final stage of Qualifying, the Firestone Fast 6, clocking a 1:13.6835s to cement his spot on the front row.

“It was a good lap but what we did in Q1 really helped us there with being able to transfer on the black [hard compound] tyres,” said Herta.

“That was the biggest thing, being fast on the blacks really just made it a lot easier for the rest of the way. But great job by everybody, great job by the team.

“The car is fantastic, as you could see, what we were able to do on the black laps compared to everybody, we’re really in a league of our own, so it felt amazing.

“Good car to take into the race tomorrow too, nice and stable, so really excited.”

Group 1 running in the first round of Qualifying was stopped early as series rookie Jimmie Johnson clattered into the wall on his out lap, caving in the right front corner on his #48 Chip Ganassi Racing entry.

A late flurry of action saw Newgarden surge to the top, only to be beaten by Alexander Rossi of Andretti Autosport and then Palou.

At the end of Round 1, it was Palou, Rossi, O’Ward, Felix Rosenqvist (McLaren SP), Newgarden, and Will Power (Team Penske) who made it through to Round 2.

Herta was among the front runners early on, eventually going quickest on a 1:14.7067s with the harder compound tyre, a time he felt would take him through to Round 2.

Dixon climbed to second place late in the piece from outside the bubble, though it was James Hinchcliffe (Andretti Steinbrenner Autosport) who was the surprise performer as he surged to third.

Jack Harvey of Meyer Shank Racing would edge ahead of Hinchcliffe at the death with Simon Pagenaud (Team Penske) and Romain Grosjean (Dale Coyne Racing with Rick Ware Racing) making the cut out of Group 2.

The Fast 12 was punctuated by an incident late in the piece just moments after hometown favourite Newgarden set his fastest lap of the session.

Having just gone second quickest behind Palou, Newgarden understeered into the outside wall.

Despite heavy damage to the right front corner, the #2 pilot pinned the throttle to get his car out of the way and into a run-off area to avoid bringing out a red flag.

In the end, it was Palou with a 1:14.4578s who was quickest followed by Rossi, Herta, Dixon, Rosenqvist, and Newgarden.

While Newgarden’s time was enough to advance him to the Fast 6, his time would be disallowed for bringing out a yellow flag.

That promoted Grosjean to the shootout while Harvey, Pagenaud, O’Ward, Hinchcliffe, Power, and Newgarden completed the top 12.

Grosjean would go second fastest but eclipse the time of Palou on his second lap with a 1:15.6062s.

Herta bested them both, however, setting a blistering 1:14.8530s to go eight tenths faster than Grosjean.

Rosenqvist then went to second on his final flying lap, setting a 1:15.0045s.

Herta went quicker still, setting a 1:14.2226s to put himself well clear of Rosenqvist. Rossi then climbed to second on his final attempt with a 1:14.8537s.

Despite having a handy margin over the field, Herta continued to lower his best time, his final effort a 1:13.6835s.

Having been quiet throughout the session, Dixon’s last flying lap took him to second place while team-mate Palou put a lap together at the death to go third.

In the end, Rossi, Rosenqvist, and Grosjean completed the top six.