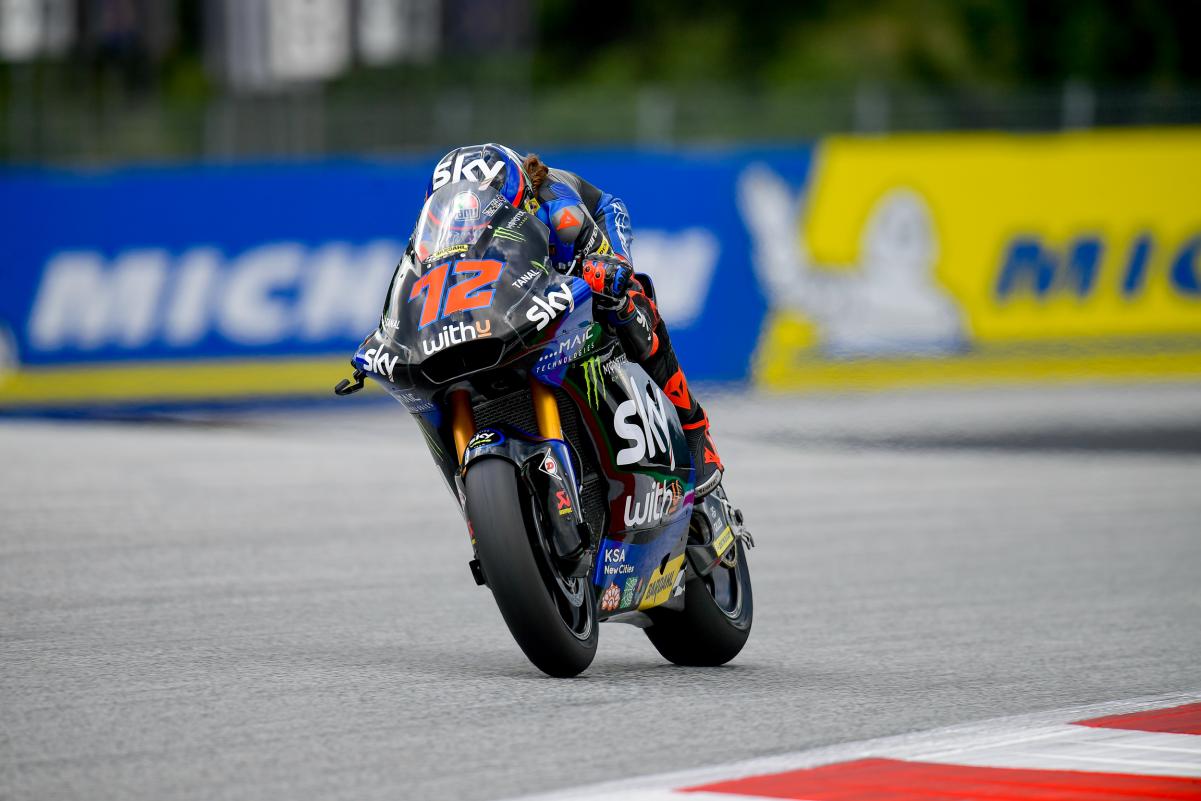 Marco Bezzecchi has won the Styrian Moto2 Grand Prix while Remy Gardner finished fourth after a late mistake at the Red Bull Ring.

Gardner extended his championship lead over Red Bull KTM Ajo team-mate Raul Fernandez to 35 points, but the margin could have been even greater had #87 not run into the gravel on the sixth-last lap of the contest.

That mishap gave Bezzecchi a reprieve, before the Sky Racing Team VR46 rider saw off late pressure from Aspar’s Aron Canet to take his first victory of 2021.

Canet ended up second and Augusto Fernandez (Elf Marc VDS) third, while Raul Fernandez slipped to seventh on the 25th and final lap.

The race began on a drying track and Gardner made a good initial launch from pole position but it was Bezzecchi going up his inside at the first corner to snatch the lead.

The Australian tried to strike back at the next braking zone, Turn 3 at the top of the hill, but ran long and instead dropped to third, behind Raul Fernandez.

Canet picked off Ai Ogura (Idemitsu Honda Team Asia) on the standing lap and would join the trio ahead in quickly breaking away from the pack.

As they did so, Gardner put a textbook move on Raul Fernandez at Turn 3 on Lap 2, before Canet got under the MotoGP-bound Spaniard at Turn 9 on Lap 3 to take up third.

Gardner was putting pressure on Bezzecchi when the Italian was slow off Turn 1 on Lap 7, but that allowed Canet to pass both of them up the hill.

The championship leader was a net unchanged second by the time they exited Turn 3, and hit the lead when he went down the inside of Canet, six corners later.

Raul Fernandez, on the other hand, ran wide off that downhill right-hander and dropped to seventh, behind Sam Lowes (Elf Marc VDS), Ogura, and Augusto Fernandez.

Gardner used his clear air to set back-to-back fastest laps, on Laps 8 and 9, while an increasingly ragged Raul Fernandez was issued a track limits warning.

Ogura got back ahead of Lowes on Lap 9 and then took the fastest lap mantle off the race leader as he went after Bezzecchi, who was still holding third spot.

Bezzecchi took over second when he went under Canet on Lap 15 at Turn 1, at which time Gardner was 0.9s up the road.

Bezzecchi caught up to Gardner and passed #87 on Lap 19 at Turn 1, handed the spot back when he ran wide at Turn 3, but passed him again at Turn 4.

As that was going on, Canet and Ogura went to war over third place again, but the latter managed to prise it away on that occasion, putting himself on for a maiden Moto2 podium.

Gardner seemingly outbraked himself at Turn 4 on Lap 20 and while he just avoided nailing the Italian on Bike #72, the Sydney native ran into the gravel and dropped back to fifth, one position ahead of Raul Fernandez.

Something of a reprieve came when Ogura soon copped a long lap penalty for exceeding track limits.

The Japanese rider was overtaken by Gardner on the run up the hill when he took his medicine on Lap 22, something which allowed Canet to inherit second spot and Augusto Fernandez to move into the podium positions.

Canet continued to represent a threat to Bezzecchi but ended up taking the chequered flag just over 1.1s behind.

Augusto Fernandez was a further two seconds back, while Gardner beat Ogura to the finish line by less than a tenth.

As it turned out, Ogura would subsequently be given a three-second penalty for shortcutting his long lap, but he had enough margin of Celestino Vietti (Sky Racing Team VR46) to hold onto fifth position in the classification.

Vietti had done Gardner a favour when he slipped under Raul Fernandez at Turn 9 on the final lap, with the top 10 rounded out by Somkiat Chanta (Idemitsu Honda Team Asia), Xavi Vierge (Petronas Sprinta), and Marcel Schrotter (Liqui-Moly Intact GP).