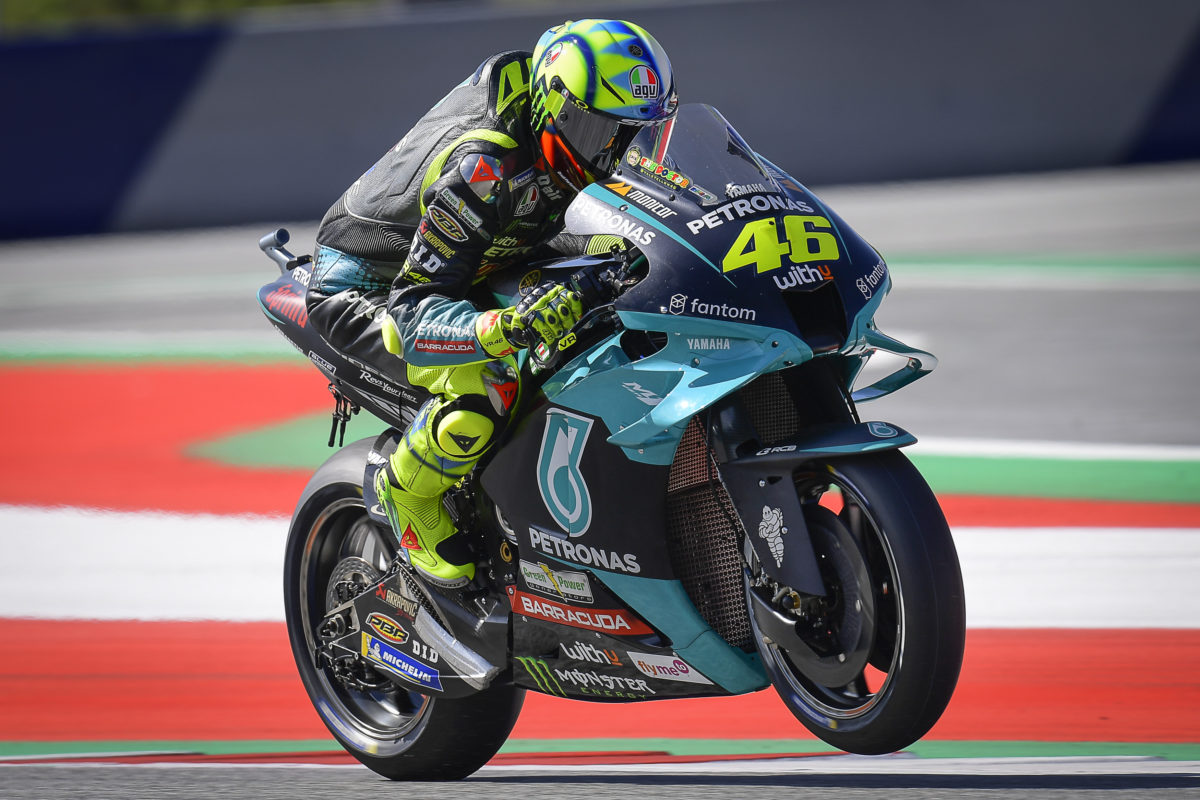 Valentino Rossi has rejected a report claiming he is in talks to sell his VR46 team to Saudi Arabian Prince Abdulaziz bin Abdullah Al Saud.

VR46 is linked to the Prince though an apparent sponsorship deal with the predominantly state-owned Aramco petrochemical company, a deal about which there remains some scepticism.

However, a report from Italy’s Il Sole 24 Ore earlier this week claimed that Rossi was also negotiating to sell the team altogether, with a figure of EUR 150 million suggested.

That was put to the retiring champion by Italian media at this weekend’s Michelin Grand Prix of Styria, where he denied the rumour.

“It is absolutely not true that we want to sell VR46 to the Saudis,” said Rossi after Friday practice at the Red Bull Ring.

“This is just made-up news; we don’t even think about it.

“We like it, we have our whole world there and it’s something that I have no idea how it came out.”

Tanal Entertainment Sport & Media, the holding company owned by the Prince which announced the Aramco sponsorship in April, advised last weekend that it would be holding a press conference in coming days.

That press conference, which would cover a wide range of activities but have “special emphasis” on the VR46 partnership, is yet to take place.

“As for Tanal, I don’t know much about this press conference,” said Rossi.

“Our lawyers and accountants are working in VR46, who are trying to do everything.

“But maybe I’m not the right man to talk about these things, because I know up to a point.”

Exactly what the relationship between Aramco and VR46 is remains unknown, given the company has reportedly denied knowledge of any agreement.

A theory emerged in recent weeks that Rossi might choose to continue his career by riding for his own team in order to attract alternate backing, and talk from his camp also suggested he might go around again.

The 42-year-old did indeed decide to retire, leaving a seat to fill alongside incumbent Luca Marini, who has been placed at Esponsorama Racing this year before VR46 effectively takes its place on the grid.

Marco Bezzecchi remains in the frame for a call-up from its Moto2 team, according to VR46 Racing boss Pablo Nieto, despite reports suggesting he has already signed for SRT.

Meanwhile, Rossi has hosed down rumours that former Monster Energy Yamaha team-mate Maverick Viñales, who is on the way out of the Iwata manufacturer’s works squad, might ride for him.

“We like Maverick a lot because he is a top rider, and then I always got along very well with him when we were team-mates,” said the Italian.

“There is a lot of respect between us, but we thought about making this team to make the riders of the [VR46] Academy race and this is our programme.”

As for Bezzecchi, Nieto admitted on the television world feed during practice at the Michelin Grand Prix of Styria, “It’s difficult to manage this situation because we are the VR46 Academy, we manage all of these young riders and we have to put on the table the best options for these riders.

“We know that we have our own team as well, so it’s a difficult situation.

“We want to have the best thing for the rider and for the team. We have to think about everything. Of course, the last thought is always with the riders and we have to decide what to do and see what all of the options are.”

A conclusion to the talks has not yet been reached, with Rossi’s retirement only announced on the day prior to track activity at the Red Bull Ring.

“The first option is Marco to be the second rider, but it’s not any closer because the news was only from last week, so we have to talk some more and see,” explained Nieto.

“But he’s the first option and we like him.”

Should he end up at SRT, Bezzecchi would likely fill only half of its vacancies given Franco Morbidelli appears set to move to the factory Yamaha team in place of Viñales.