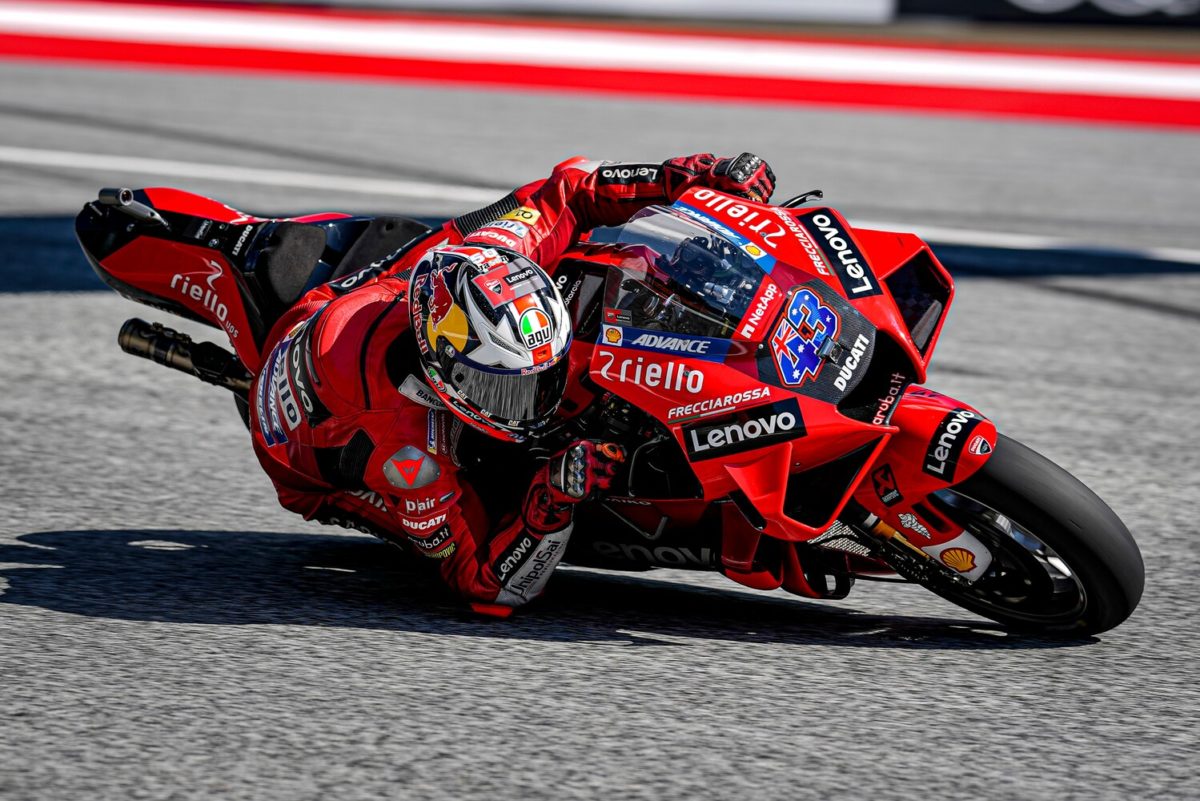 Jack Miller was able to provisionally bank a berth in Qualifying 2 at the Michelin Grand Prix of Styria despite an issue with his Ducati, amid changeable weather.

Miller was 10th-fastest after the first two practice sessions in Round 10 of the MotoGP season at the Red Bull Ring, where rain fell in Free Practice 2 and the weather forecast going forward is uncertain.

If showers continue in FP3, then the Ducati Lenovo Team rider will thus have done enough to earn a direct berth to the second and final phase of qualifying.

He will have done so without having set his fastest lap on new tyres, unlike the top five on the timesheet, and despite having his FP1 hit-out disrupted due to an unspecified issue.

“The dry in the morning was good,” said Miller, who wound up 1.022s off the pace set by Idemitsu LCR Honda’s Takaaki Nakagami.

“First laps after a little break [summer break], it was shaking out the cobwebs, the first couple of laps there.

“But no, it was good, I had a good feeling immediately, I was able to do a few laps, and we made a slight adjustment and we had a few little issues with the bike.

“We changed it and went out and I got one lap at the end, on the used tyres, and I was able to improve, put myself into 10th, which I think was kind of important; we’re on the buffer there, but just to be inside that top 10 in case it rains tomorrow morning as well.”

The Queenslander was also the only rider to venture onto the Red Bull Ring on slicks in FP2.

Rain was falling at the start of the 45-minute session and while a dry line had formed by the end, it was not dry enough for Miller to go faster.

He finished 14th-fastest in that session on a 1:33.453s set on wets, but is comfortable with where he stands in any conditions.

“In the afternoon, in the full wet, it was great,” remarked Miller.

“Came in, waited it, and then tried to put the slicks on at the end; went and wobbled around.

“It was not too bad; I felt really good, it just took a bit to get the right-hand side working.

“I felt like, [with] one or two more laps, I would have had the wet boys covered, but I just ran out of time.

“But it was good; valuable information, let’s say, for Sunday.

“Looks like we’re going to have a bit of mixed conditions, so it’s always good when you can just try at least, after a break as well, just to get that sort of feeling and understand how they’re going to react over the wet patches.”

Free Practice 3 takes place this evening, with qualifying from 22:10 AEST.