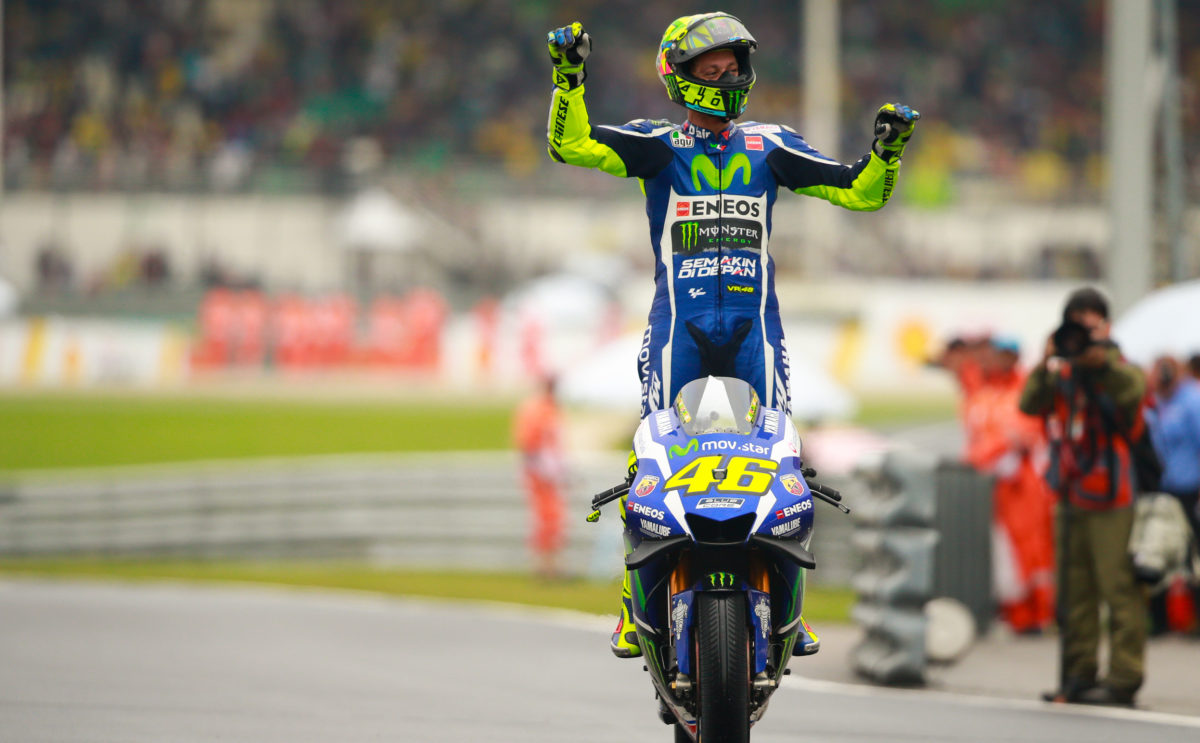 Valentino Rossi on a factory-entered Yamaha in 2016

Valentino Rossi has received high praise from the manufacturer with which he won a majority of his MotoGP titles, Yamaha, after announcing his retirement.

This year will be Rossi’s last as a MotoGP rider marking the end of one of the greatest careers which the sport has ever seen.

The Italian has accumulated a total of nine world championships, including seven in the premier class, and four of those came on motorcycles produced by Yamaha.

Rossi remains directly contracted to the Iwata marque this season despite his move from the factory team to SRT, and had always been promised full factory support had he opted to race again in 2021.

Statistically, he is the greatest Yamaha rider ever, and his 2004 title, in his first year with the manufacturer, was also its first in a dozen years.

“First of all, I would like to thank Valentino sincerely, on behalf of Yamaha Motor Racing, for the special partnership between him and Yamaha,” said Jarvis.

“We were privileged to be key players in a legendary Grand Prix era, with Valentino fortifying Yamaha‘s rider line-up for 16 – still ongoing – seasons.

“The now iconic partnership between Yamaha and Rossi started almost like a fairytale. Rossi won that incredible race at Welkom in 2004, his first GP with Yamaha.

“His arrival at Yamaha was the catalyst that completely changed our MotoGP racing programme, and he gave us the confidence to regain our challenging spirit and once again become MotoGP World Champions.

“Valentino is a living legend whose successes and personal flair contributed to Yamaha‘s legacy and heritage in abundance.

“Also, during more difficult periods, his positive mindset would be a boost to those around him, and he was always ready to go the extra mile for a good result.

“It‘s thanks to his never-failing passion for MotoGP that we can proudly look back on soon-to-be 16 fantastic seasons together.”

“First and foremost, I would like to take this opportunity to express my gratitude to Valentino for the great partnership we enjoyed with him,” said Hidaka.

“He will be deeply missed on track, inside the paddock, and behind the scenes at Yamaha, but we fully respect his decision. 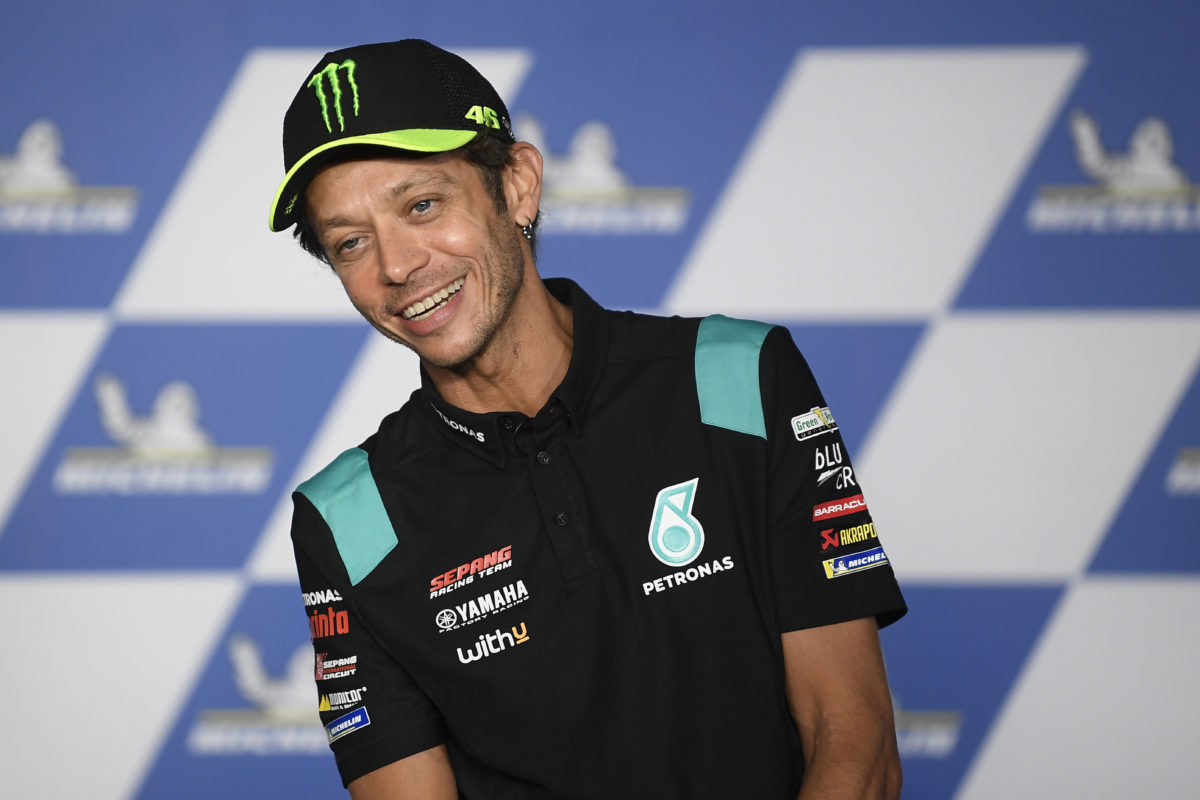 Rossi at the press conference in which he announced his retirement. Picture: Yamaha Factory Racing

“At Yamaha we take great pride in the Grand Prix motorcycle racing legacy that we have created together. The 16 years we will have spent as partners were filled with epic battles on track and wins.

“At Yamaha we always strive to give our fans and customers the feeling of Kando*. In a way, Valentino‘s entire career at Yamaha embodies this quest for the deep satisfaction and intense excitement that we experience when we encounter something of exceptional value.

“We are all very pleased that Valentino has decided to remain a Yamaha rider until the end of his MotoGP racing career and beyond.

“There are too many great moments between Yamaha and Valentino to pick one as a favourite. There were also challenges throughout the years, but the trust between us never wavered and even strengthened our partnership through the years.

“Valentino‘s achievements were made both on and off the track, and they make up a large and important part of Yamaha‘s racing heritage.

“We thank him for his incredible efforts, unequalled skills, and never-failing passion and optimism.

“We are proud to have been a part of his unique success story. We will forever cherish the precious memories we made together and hope to keep adding to them with him as a Yamaha brand ambassador.”

Jarvis believes that Rossi’s charisma will also be missed, but noted that, after the disruption of the COVID-19 pandemic, some fans will get to share in the farewell.

“We all knew that eventually the moment would come that Valentino’s illustrious Grand Prix racing career would come to an end,” he added.

“His unparalleled skills and warm charisma will definitely be greatly missed by the fans, the media, the MotoGP paddock, and the entire Yamaha staff.

“But before he finally hangs up his leathers, we have nine more opportunities to enjoy and savour his appearances at the remaining Grand Prix races of the 2021 season.

“In that respect it is very fitting that we will see the return of racing fans and spectators at many of the coming races.

“So let us all enjoy the next GPs and then we‘ll get the chance to say a proper thank you to Valentino at the end of the Valencia GP weekend in November.”

Rossi has ridden for three manufacturers in MotoGP, claiming his first three premier class world championships in his four years with Honda.

A two-year period away from Yamaha at Ducati, in 2011 and 2012, was far less fruitful, but his VR46 team has signed with the Bologna marque to run Desmosedicis when it joins the MotoGP grid.

The beginning of the end for Rossi as a rider is the Michelin Grand Prix of Styria, for which Free Practice 1 starts on Friday evening (AEST) at the Red Bull Ring.

* A Japanese word for the simultaneous feelings of deep satisfaction and intense excitement that one experiences when encountering something of exceptional value.