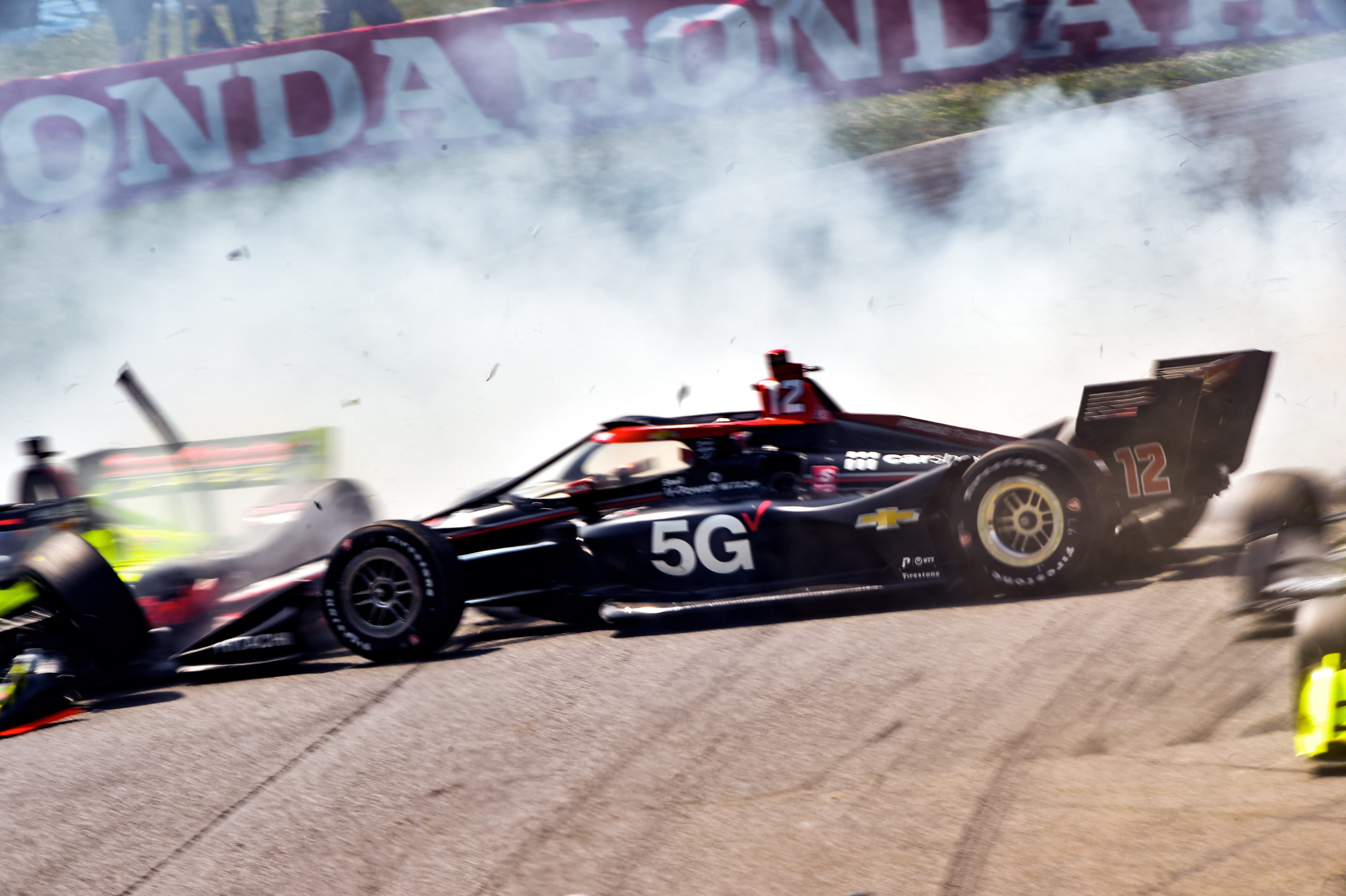 Will Power gets collected by Ed Jones at the Mid-Ohio Sports Car Course. Picture: Chris Owens

Team Penske pilot Will Power has revealed he fractured his wrist in a crash at the most recent round of the IndyCar Series at the Mid-Ohio Sports Car Course.

Power was battling Chip Ganassi Racing’s Scott Dixon when the pair came to blows over the brow at Turn 5 on Lap 4.

That saw Power loop out in a cloud of smoke as he nailed the throttle in an effort to right himself.

However, in doing so, the #12 pilot found himself stranded in the middle of the circuit and was subsequently clattered into by Dale Coyne Racing’s Ed Jones.

After the incident, Power said he had sore wrists but believed he hadn’t suffered any breaks.

Since then, the 40-year-old discovered he had sustained a broken wrist.

Fortunately, the cancellation of the Toronto event gave Power a month to recover from the injury.

“It’s been kind of good [and] lucky because I fractured my wrist at Mid-Ohio, so it gave me plenty of time to recover and get back to full health and also just have a break from the season,” Power told Speedcafe.com.

“When I crashed at Mid-Ohio, I got hit. You’re holding the clutch, the wheel whips around, and it hurts your wrist. It’s a very common injury.

“Often, you have broken fingers and hands and thumbs whenever you have wheel-to-wheel contact.”

The clash with Dixon put a major dent in Power’s title chase, bogging him down in 11th with six races remaining.

With the cancellation of the Toronto event and series organisers opting not to replace it, that has made for even less time to recover ground.

“Really, a good aim would be to be in the top five at the end of the year,” said Power.

“It would be very tough to win the championship. You’d literally have to win every race and people have to have bad runs.

“I would have said Mid-Ohio was a very easy podium day for me if Dixon didn’t chop me down there. That was a huge blow to getting back into the top five.

“I’m really not impressed by the way he raced me there. He said the reason he did it is because I ran him wide at that particular corner two years before.

“We’ll see how it plays out. There’s a lot of quick guys in this series and a lot of different winners this year.” 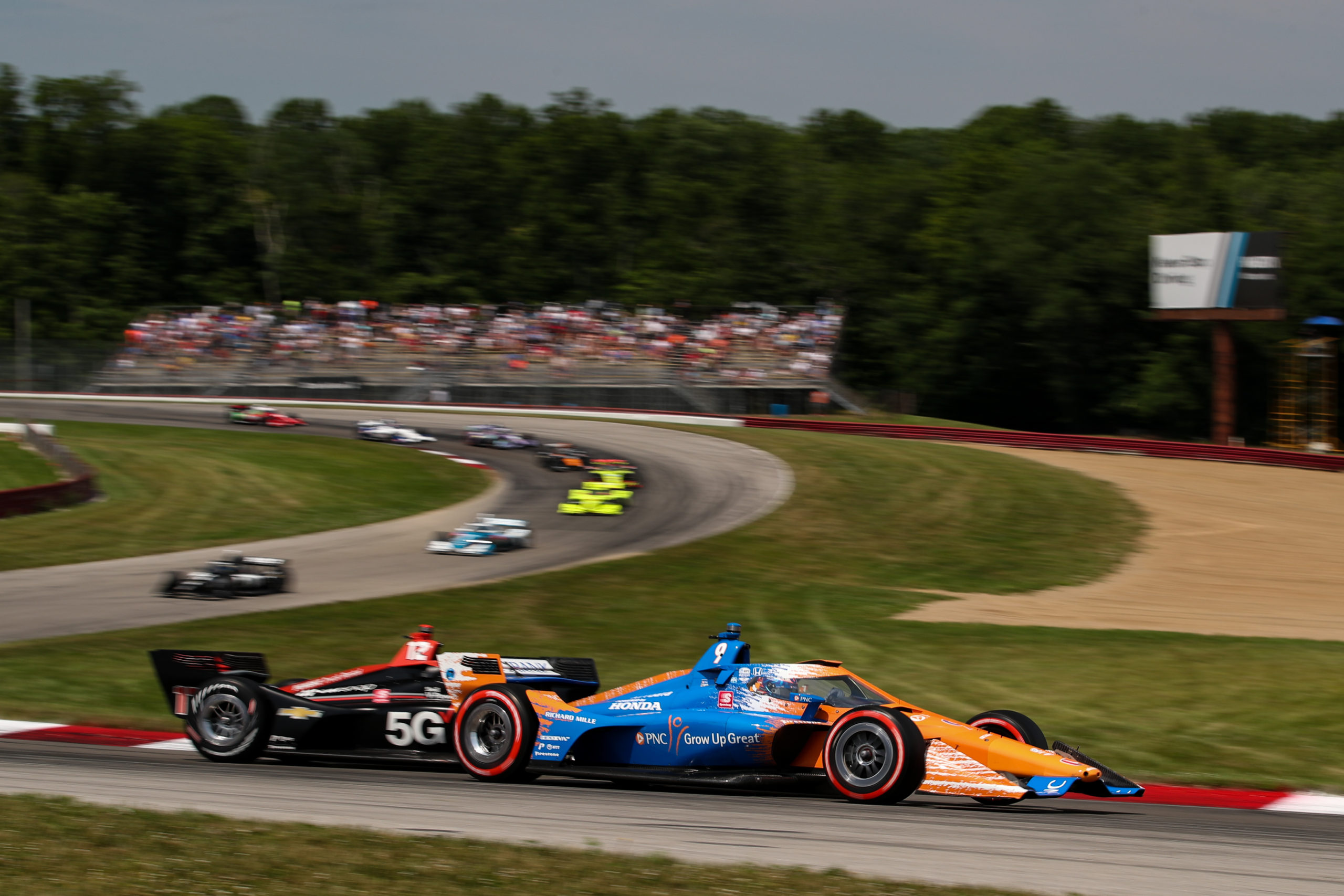 Power and Dixon at the moment they clashed on Lap 4. Picture: Joe Skibinski

Power has been kept winless in 2021, although that’s not been for a lack of speed.

The 2018 Indianapolis 500 winner was second in the season opener behind Alex Palou but suffered a lull, only cracking the top 10 twice in the following six races.

While success hasn’t necessarily been forthcoming, the Toowoomba-born driver has been competitive.

Power was on course to win the Detroit Grand Prix opener, only to have his race hampered just a few laps from the finish with an electrical issue.

He followed that up with third place at Road America and is sure a strong result at Mid-Ohio was going to be “easy” if not for the clash with Dixon.

“Going all the way back to Detroit, the first race I should have won that one and the second race [team-mate Josef] Newgarden led the whole thing and then was passed in the last couple of laps.

“Then Road America, again, Newgarden led the whole day. I was hovering around the top four or five all day. He had a mechanical, but then went on and won Mid-Ohio.

“The speed is there. Indianapolis was a massive disappointment. The team put a huge among of work into that event and it was all a big surprise to us that we weren’t competitive there.

“Apart from that, I feel we’ve been pretty good.

“It just goes like that sometimes. I’ve been around this sport long enough to know that you have good runs and bad runs.

“Sometimes you win races you shouldn’t, sometimes you have an issue on a race you should win. It’s just the way this sport is because it relies on a big group of people and a lot of moving parts to all come together.

“There’s so many things that can go wrong in so many different ways. It’s hard to get it right.”

This weekend Power takes to the streets of Nashville for the Big Machine Music City Grand Prix.

The three-day event gets underway tomorrow with Practice 1 at 06:10 (AEST).

Practice 2 takes place on Sunday morning at 03:00 AEST before Qualifying at 06:30 AEST.