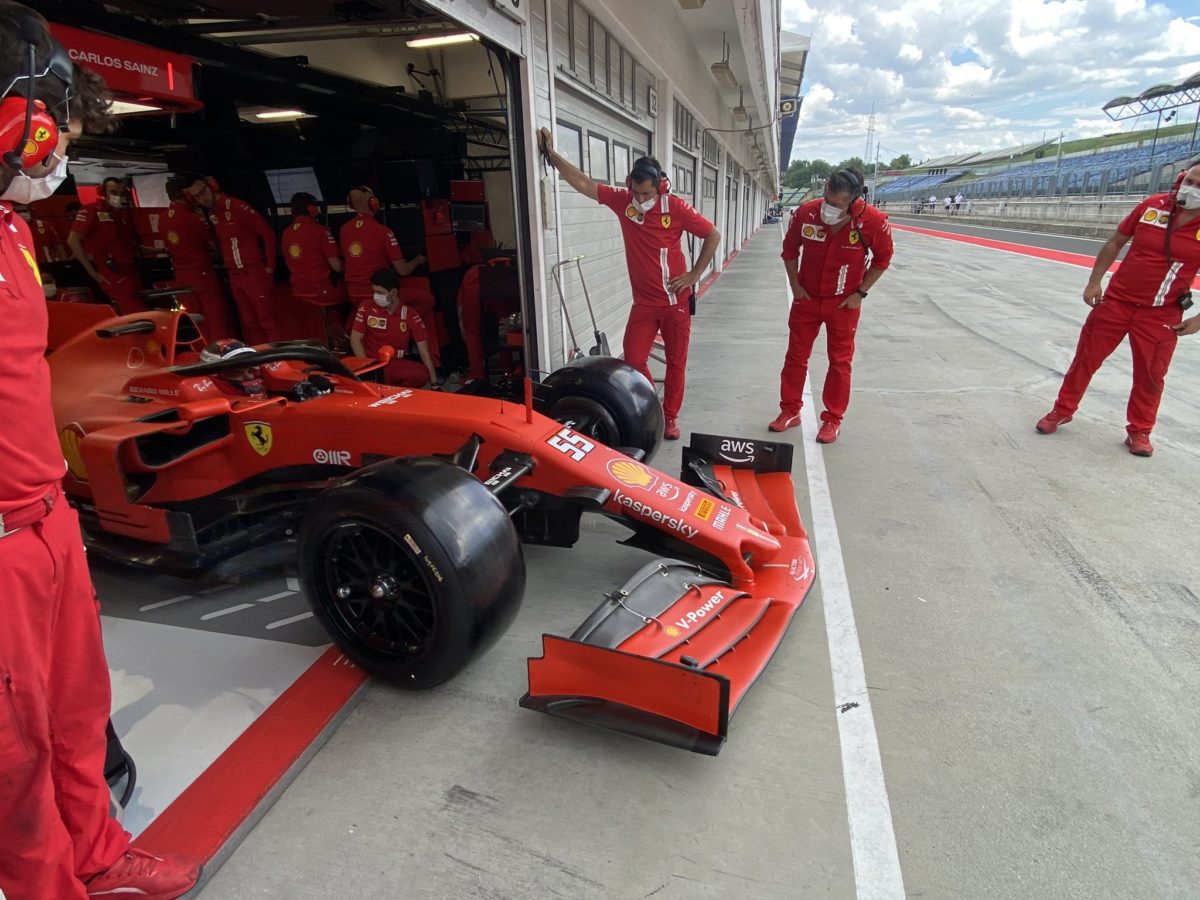 Ferrari during tyre testing in Hungary

Pirelli is set to finalise the dry weather tyres it will supply to the Formula 1 field early next month which it hopes will be less sensitive than previous seasons.

Testing of the slick range of tyres concluded yesterday following a two-day test at the Hungaroring.

McLaren, Ferrari, and Mercedes took part in that test, the seventh such outing of 2021 with nine of the 10 teams taking part.

It’s added to the challenge for the Italian company, which has had to work with cars modified to produce something akin to the downforce levels next year’s machinery will.

New aerodynamic rules for 2022 will see a return to ground effect for the first time in 40 years.

“Obviously, we are using different mule cars with different characteristics, even if all the teams are trying to give us a car that is representative to the 2022 expected performance, but they are different,” explained Mario Isola, Pirelli’s head of F1 and car racing.

“In general, we had feedback that were quite consistent, and this is very helpful when you develop something because when you have results that are completely different, that is difficult to decide.”

Pirelli has been F1’s sole tyre supplier since 2011 and has often been criticised for producing tyres that are sensitive to overheating.

Part of the requirements given to the Italian company for next year were to broaden the working range in the hope that it would reinforce the technical changes being made to cars.

Aerodynamic rules have been modified such that cars should, at least in theory, be able to follow more closely.

However, in order to do that, it’s key that the tyres are up to the job.

“It will be a different story next year when we’ll be requested to design the new 18-inch tyres with different characteristics; that’s overheating, that’s degradation,” Isola explained.

“We know that with the current cars that are very, very fast, even if much heavier compared to the past, you put a lot of stress on the tyres,” he added.

“This generates degradation, and also when you follow another car you lose downforce and this is an additional element.

“So we are working together with the FIA and FOM in order to have a different situation for next year.

“I’m sure that if you don’t lose downforce when you follow another car, and with tyres that are designed with different characteristics, we can achieve the target.

“The letter (which outlines Pirelli’s targets for 2022) is just stating that we have to design a tyre with less than correlation, the number of degradation are in the target letter.

“The delta lap time is defining the target letter, we have to focus on compounds with a wider working range to reduce the overheating.

“These are the main parameters that are interesting to know that there are some other technical characteristics but mainly this is a summary of what we agreed.”

A final test, to finalise the wet and intermediate tyres, is scheduled for Magny-Cours on September 15-16.

Two wet tests having already been carried out, with Ferrari at Jerez in February, and with the Italian team again at Paul Ricard in May.