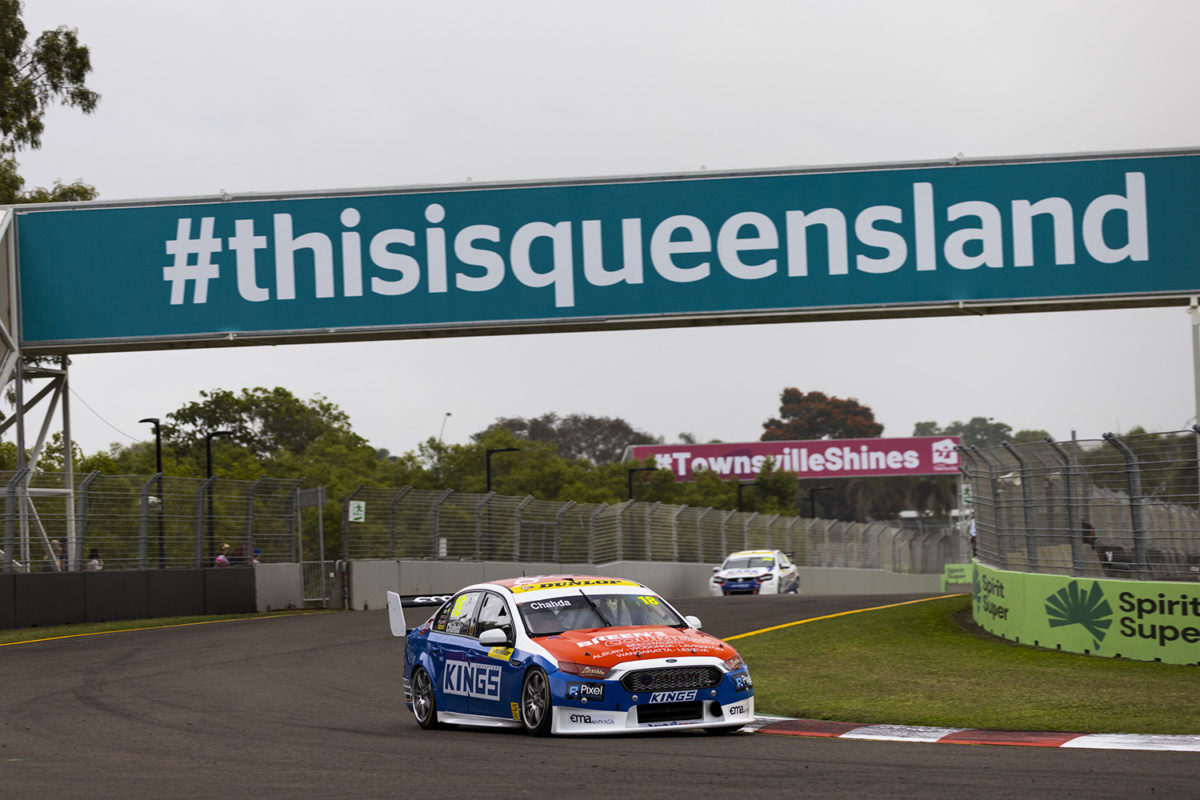 A new engineer is making all the difference for Matt Chahda Motorsport in the 2021 Dunlop Super2 Series.

Matt Chahda sat third in the standings after multiple penalties were applied following the two races which made up Round 1 at Mount Panorama, and still occupies fourth with three rounds down and three to go.

His fortnight in Townsville last month included another two top five race results, and father/team manager Amin Chahda has put the sustained improvement down to the addition this year of engineer Brian Cottee.

“All in all, we had a pretty good weekend,” Amin Chahda told Speedcafe.com of the latter outing in North Queensland.

“The car showed some real promise, the new engineer we’ve got’s really making a big difference to us, and [so is] Matt’s driving as well.”

The former Image Racing engineer is not the only difference for MCM, with a quick brake bias changer going into its ex-Dick Johnson Racing FGX Falcon between Townsville events.

“[Cottee has] made all the difference, and I’ll be honest, it’s only little things that we were missing,” added Amin Chahda.

“Matt’s never had a quick bias change, ever in his career, and everyone’s got them, and on the week before when we were qualifying two, three tenths off second and third, I asked the question of a few teams and they said, ‘It’s the brake bias; you haven’t got it.’

“So, I rang GRM [Garry Rogers Motorsport] on the Monday and spoke to Stefan [Millard, team manager], Stefan put one together for me, and Brian – because he flew back to Melbourne for a few days for work – grabbed it and brought it back.

“We fitted it on the Friday before the second round, so Matt had it on Saturday and that’s why he was so competitive.”

Matt Chahda officially got a maiden race podium in February’s Bathurst finale and would have had another in the most recent Townsville event had results not been backdated due to a red flag.

That outcome arose due to a pile-up when Zak Best and Tyler Everingham made contact in the battle for third position and the former went around at the blind Turn 3 of the Reid Park Street Circuit.

Jayden Ojeda was initially classified race winner when results were taken effective Lap 13, before Broc Feeney, leader at the time of the incident, was given such honours when the backdating was shifted to Lap 14.

Ojeda deemed that “only fair”, but the stewards’ decision over the clash which triggered the chaos is understood to be a different matter.

Neither Everingham nor Best were penalised, given stewards deemed no driver wholly or predominately to blame, and that is believed to have caused dissatisfaction among a number of team bosses given the cost of the damage which resulted.

Matt Chahda had sat third under the subsequent Safety Car and thus also at the time the red flag was called, and Amin believes he might have challenged for that position anyway, had the battle continued.

“If it had have gone the full distance, he had probably three or four tenths on Best, and then the same on Everingham in front of him, because they sort of all barged in on him and he let them go and he knew he could catch them,” he asserted.

“So, if it had have gone the distance, he would have got them, and that’s the other frustrating part; it was our first ever podium [on the road].”

Furthermore, Chahda did incur damage in the mess, and that had a knock-on effect when he qualified only 12th the next morning, before racing to ninth.

“Sunday’s qualifying was shit because after the crash on Saturday, the [replacement] splitter that we had was a little bit different to what was on the car,” explained Amin Chahda.

“The heights were completely out, and he said the thing was just so different to what it was the day before.

“We got it a bit better for the race; that’s why he crept up a bit in the race.”

Feeney leads the Super2 Series from Best, who was a breakthrough winner in Race 2 of the second Townsville round, and Ojeda.

Round 4 is set to unfold at the Winton SuperSprint on October 2-3.