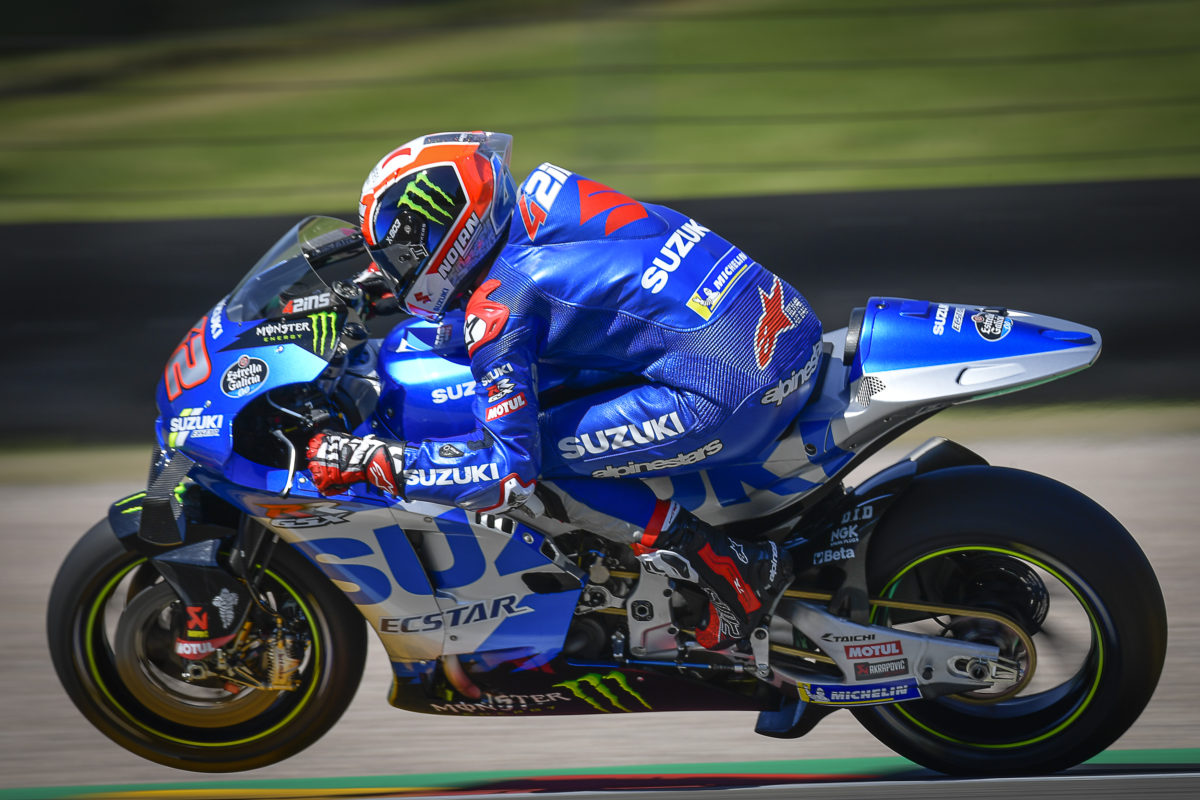 Suzuki has joined the other five MotoGP manufacturers in installing a rear ride height device on its bikes, ahead of this weekend’s resumption of the season after the summer break.

Team Suzuki Ecstar’s Joan Mir won the 2020 championship and while he currently occupies fourth in the standings, the Spaniard is 55 points or more than two races off the pace set by Yamaha’s Fabio Quartararo.

Alex Rins languishes all the way back in 14th after a first half of the season which included a run of four crashes in as many races and a bizarre cycling accident which sidelined him from the following grand prix.

However, it has been the lack of a rear ride height device which has left the GSX-RRs relatively uncompetitive anyway.

While Ducati originally introduced a holeshot device which holds the rear of its bikes down to enhance acceleration at race start, the Bologna manufacturer then turned it into a system which is engaged during races.

Naturally, every other factory copied the idea except, until now, Suzuki.

The development was announced by the Hamamatsu marque in the Summer 2021 edition of its Team Suzuki Racing Magazine.

“It’s something that we have deliberately strived for throughout the development of the GSX-RR.

“We know that if you improve one area, you might lose in another, so we’ve always tried to make a very well-rounded machine which performs well at most circuit.

“Although we are satisfied with our 2021 bike, there are always improvements to be made, and we believe the introduction of the squatting device will help our riders to progress.”

All manufacturers already had a front ride height device, although that is used only for starts.

Rins had estimated that the straight line speed deficit caused by the lack of the rear ride height device was costing he and Mir multiple tenths of a second per lap.

“It depends on the track,” he added.

“For example, in Qatar without this rear device, for sure on the straight the others were taking like 0.3, 0.4 seconds.

“In Sachsenring, we felt it in the race and looking from the helicopter camera you can appreciate that the others were going away from Joan and me, we had no chance to overtake the rider in front.

“But, for example in Mugello there was less difference.”

While the smaller disparity at Mugello, with its long, rising main straight, seems counterintuitive, the rear ride height device should come into its own this weekend and the next at the Red Bull Ring.

The Austrian circuit is 4.3km long yet has just 10 corners and is regarded as a horsepower track, meaning acceleration is crucial to lap speed.

Practice for the Michelin Grand Prix of Styria starts on Friday evening (AEST).