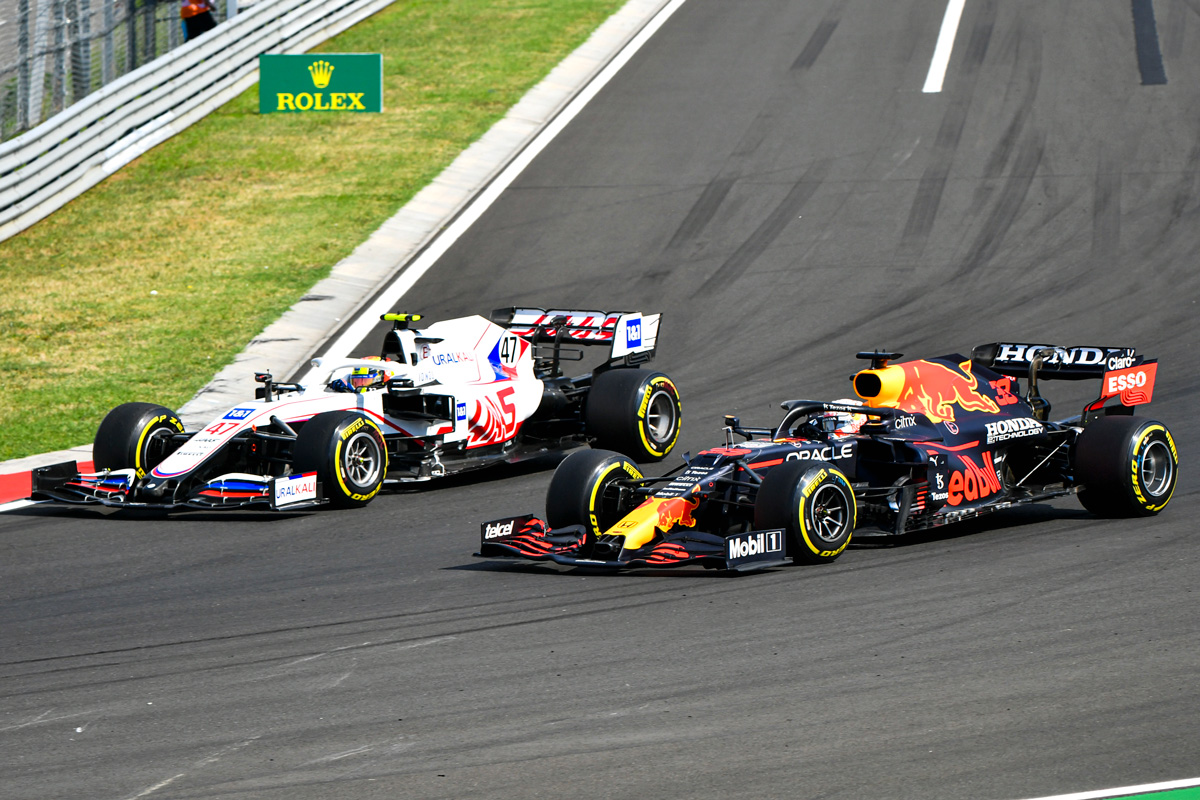 Mick Schumacher and Max Verstappen side-by-side at the Hungaroring

First-corner mayhem at the Formula 1 Hungarian Grand Prix opened the door for some different names to be thrust into the spotlight, and Mick Schumacher was among those to make quite the impression.

It’s been a relatively low-key rookie campaign for the 2020 Formula 2 winner and son of seven-time world champion Michael, given his Haas team has openly directed its full focus towards next season’s new regulations.

Schumacher in fact had been on the receiving end of some criticism from Haas team principal Guenther Steiner after crashing heavily in Free Practice 3 on Saturday at Hungary.

However, Schumacher grabbed his opportunity in the race to show the world what he’s made of, after multiple Lap 1 incidents saw him gain 10 places to 10th by the time red flags were shown.

The German for many laps managed to keep a train of cars behind him, including none other than title protagonists Max Verstappen and Lewis Hamilton.

Schumacher offered a glimpse of the racecraft he may one day be able to display in a more competitive car to defend forcefully against Verstappen, the damaged Red Bull eventually getting past only after slight contact.

By the end of 70 laps, the #47 had dropped to 13th of the 14 cars still running and thus out of the points, but that should do little to take away from the 22-year-old’s efforts.

“Finishing in front of an Alfa [Antonio Giovinazzi] is something that we weren’t anticipating and starting from last and finishing P13 is quite a decent result for us,” he said after the race, which was won by Alpine’s Esteban Ocon.

“We were keen on having a point but frankly we don’t have the car at the moment to do so but nonetheless this was great experience as I’ve been able to battle with the top guys and the championship leader.

“For me personally, from a growth point of view, it was very good.

“We always knew it was going to be tough but today was a very nice day and after having a disappointing [Saturday], we came back on a high.

“Ending this first half of the season on a high is very positive for everybody – the team and myself – and being able to battle with the top guys brought me so much experience and knowing that I can throw out my elbows, I’m glad I got that opportunity.”

Steiner was disappointed to miss out on a rare opportunity for points while the other previously scoreless squad, Williams, got both its drivers into the top 10.

Nonetheless, he reserved praise for Schumacher.

“The good thing was to see Mick fighting for whatever was there and holding Giovinazzi behind, that was pretty good,” Steiner said.

“For sure, it’s a good lesson for him next year to fight with somebody – even if the car is faster – he kept him behind.”

The sister Haas of Nikita Mazepin met an unfortunate early end to the race, damaged terminally when Alfa Romeo sent Kimi Raikkonen into his path during the flurry of pit stops at the restart.

Raikkonen was subsequently issued a 10-second penalty and went on to take 11th, which later became 10th after second-place finisher Sebastian Vettel was disqualified for not having the required one-litre of fuel in his car for post-race technical checks.

Aston Martin swiftly moved to appeal the decision, with no further updates on the matter coming to light as yet.