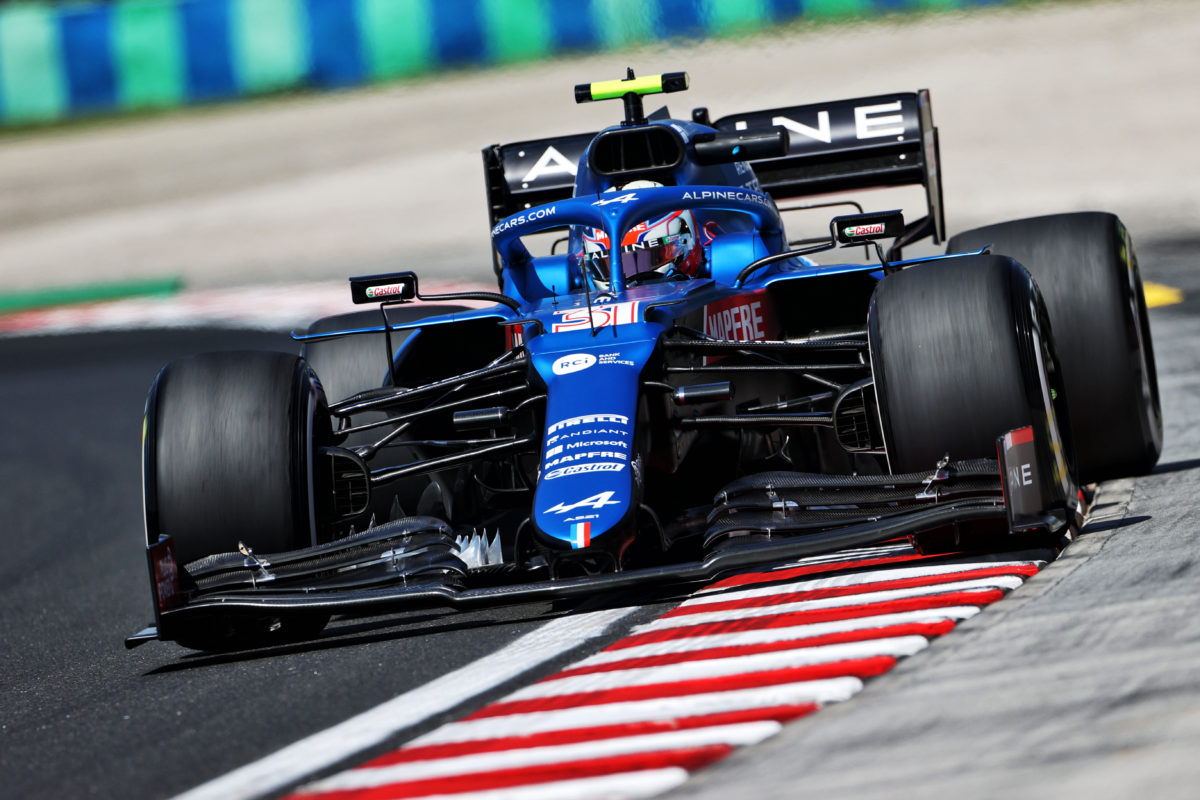 The Frenchman came out on top in a race which saw Mercedes make a fundamental strategic blunder, costing Hamilton a shot at victory.

That came after he survived an opening corner melee which accounted for five cars and left Max Verstappen’s Red Bull with heavy damage.

The Dutchman dragged the RB16B home in 10th and a single world championship point, while Hamilton stormed back to third after a strategic error and a nail-biting battle with Fernando Alonso.

Sebastian Vettel was second while Carlos Sainz navigated his way through the early turmoil to claim fourth, losing out to Hamilton in the later stages.

Damp conditions greeted the start of the race, worsening on the warmup lap.

A strong getaway saw Hamilton lead easily into the first corner before carnage ensued behind when Valtteri Bottas and Lance Stroll got it wrong under braking.

The Safety Car was promptly deployed, Bottas, Charles Leclerc, and Stroll all on the spot retirements.

Bottas had clouted the rear of Norris, sending him into Verstappen, while further back Stroll had his own moment to account for Leclerc.

Perez retired as the red flag was shown while under the stoppage Norris’ race also came to an end.

The race got underway with a standing restart, though only Hamilton lined up on the grid.

Mercedes had elected to leave the Brit on track while every other car in the race pitted to swap their intermediate tyres for slicks.

Predictably, Hamilton was hauled in at the end of the lap, handing the lead to Esteban Ocon, plummeting to the rear of the field.

Nikita Mazepin’s race came to an end when Kimi Raikkonen was released into his path as the field headed into the lane at the restart.

It broke the right-front on the Haas, ending his lap in a race that offered prime opportunity for the minnow squads to score points.

The Canadian headed Yuki Tsunoda, the AlphaTauri within DRS at points but unable to make inroads on the Williams driver.

Hamilton made slow progress, climbing to 13th after 10 laps only to find himself tucked up behind Pierre Gasly.

The pair were, in turn, tucked up behind Verstappen who was battling with Mick Schumacher.

A move around the outside at Turn 2 finally got the job done for the Red Bull driver, moving up to 10th on Lap 14.

The floodgates opened for the Schumacher, Gasly moving by at the same corner at lap later, though with considerably less difficulty.

Hamilton then found his way through as they headed down the front straight on Lap 16.

It was a move to find clear air for the Englishman and undercut the cars he’d found himself tucked up behind.

McLaren and Red Bull both responded, hauling Ricciardo and Verstappen respectively in for fresh boots.

They both emerged as Hamilton blasted down the front straight, clearing his title rival with ease and dispatching Ricciardo in Turn 1.

Tsunoda stopped from fourth on Lap 22, promoting Sainz up a place.

Ferrari had called in Sainz, the Spaniard arguing the call over the radio and remaining on track.

Next time around, Latifi pitted for Williams from third, losing out to Tsunoda as he rejoined the race.

On Lap 27, Hamilton moved by the Canadian under braking for Turn 1 to climb to seventh, soon closing up to Tsunoda ahead.

A bold move from the seven-time champ saw him move around the outside at Turn 4.

Looking to prevent Sainz falling behind Hamilton after his stop, Ferrari called the flying Spaniard into the lane for his first racing stop.

It was an important move to safeguard third place, leaving him with a newer set of tyres and track position ahead of Hamilton.

Vettel pitted from second on Lap 36, a slightly sluggish stop seeing him moving again in 3.3s.

It dropped the Aston Martin to fourth, behind Alonso in the second Alpine but with enough gap that he wouldn’t prove a factor.

Out front, Ocon was told to push on ahead of his own stop at the end of the following lap.

The Frenchman was serviced in 2.3s, leaving him still in the net lead.

It was close, however, Vettel in his wheel tracks as they exited the first corner.

The pair were close into Turn 4, but nothing was doing and the initiative lost – the one-second lost in Vettel’s stop proving decisive.

Alonso stopped from the race lead on Lap 39, rejoining in fifth.

With nothing to lose, Verstappen stopped for a second time on Lap 41, the Dutchman running 11th at the time.

On Lap 48, Hamilton stopped for a new set of medium tyres, falling to fifth behind Alonso.

Vettel was given half a chance as Ocon put a lap on Raikkonen at Turn 1 on Lap 49, but wasn’t able to take advantage.

With 16 laps remaining, Hamilton had caught Alonso and Sainz, making it a three-way scrap for third.

Hamilton got a run into Turn 2 on Lap 55, but the two-time world champion covered well.

He ran the car wide on entry before taking a late turn-in at Turn 4 as they again ran wheel-to-wheel.

It was an important battle for the broader story of the race, the delay hurting Hamilton’s chances to running down Ocon in the lead.

On Lap 56, the two world champions were at it again; the Mercedes driver trying again around the outside of Turn 2 and Turn 4, unable to find a way through on both occasions.

It was a scrap that continued for the following laps, Alonso having to continually rebuff Hamilton’s advances with a staunch defence.

A lock up on Lap 65 from the Alpine driver at Turn 1 was all it took, the Spaniard sliding wide and opening the door for his British rival.

Just two laps later, Sainz fell victim to the charging Hamilton as he clawed his way back onto the podium.

The Mercedes driver simply drove by the Ferrari down the front straight, though his chances of rising further up the order were dashed.

Vettel was some 7.8s ahead with three laps remaining, the German 1.6s away from Ocon in the race lead.

That advantage was quickly eroded, but the chequered flag came too soon; Ocon holding on from Vettel and Hamilton.

Sainz was fourth from Alonso, Gasly, Tsunoda, Latifi, Russell, and Verstappen rounding out the top 10.

Ricciardo ended the race 12th in his wounded McLaren, one spot down on Raikkonen and the third-last running home.

The result saw Hamilton take the lead of the drivers’ championship, and Mercedes control of the constructors’ fight.