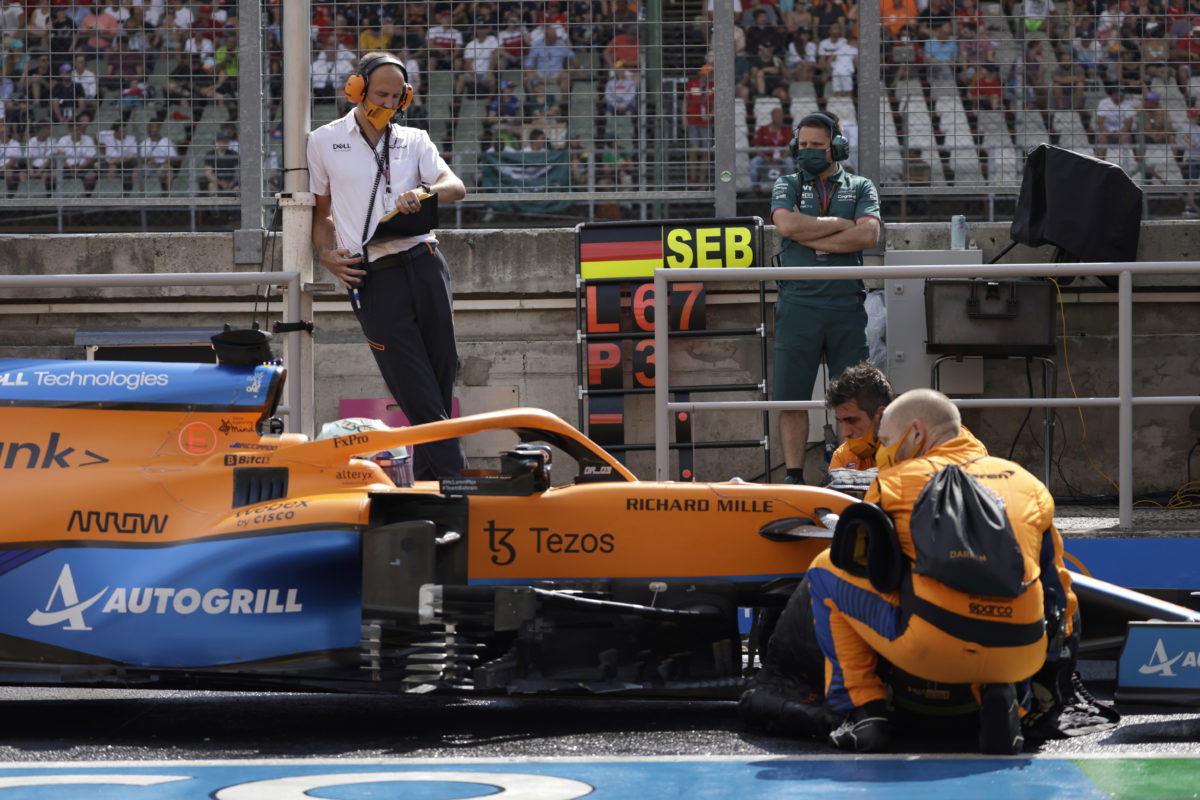 The Australian finished a lap down in 12th, having found himself pointing the wrong at the first corner.

Both he and McLaren team-mate Lando Norris was involved in the Turn 1 melee, caused by two separate incidents.

Valtteri Bottas triggered the first at the front of the field, while in the mid-pack Lance Stroll tagged Charles Leclerc, the red flag shown to allow officials to clear the wreckage.

Of those involved, Ricciardo was one of only two to carry on, though his car was heavily compromised as a result.

“Front wing was damaged, then the bargeboards, the new ones, were damaged heavily and the floor on the side in front of the rear wheels was damaged as well on the right-hand side,” explained McLaren team boss Andreas Seidl when asked by Speedcafe.com about the damage to Ricciardo’s car.

“So, huge loss, probably seven/eight tenths a lap, plus obviously the consequences this has done on the stint.”

Ricciardo’s race was therefore compromised early, with Seidl suggesting an alternate strategy would not have changed the result.

An opportunity mid-race to stop for a second time (in racing conditions) presented itself.

Battling George Russell at the time, others such as Max Verstappen and Lewis Hamilton had taken a second stop before using the tyre advantage to charge forward.

However, Seidl reasons the same approach is unlikely to have netted returns for Ricciardo.

“I don’t think it would have changed anything, we simply didn’t have the pace with all the damage,” Seidl said.

“The car had to hang in there until the end, Daniel tried, but when he was stuck behind George for quite some bit [and] he destroyed his tyres.”

Ricciardo admitted he thought he’d avoided the dramas in the opening corner before his race was turned upside down.

“I was halfway around Turn 1 and I thought I’d escaped the mess,” he admitted.

“I could see one car in front and thought ‘I’m P2! This is amazing!’ and just as I exited the corner, I saw Charles [Leclerc] come into me, but I’d suspected someone went into him, because he caught me really late in the corner.

“There were a few other drivers making mistakes into the first corner and it cost a lot of us a race,” he added.

“Valtteri [Bottas] obviously cost Lando his race and Lance [Stroll] cost me mine.”

With the damage to his car, Ricciardo admitted it was largely a case of holding on and hoping for the best for the remainder of the afternoon.

“There were parts where I could hang on to the cars ahead, but with the car damage we had, and the difficulty overtaking here, it really just limited our race,” he explained.

“In the end, the tyres were gone, and it was just about trying to hang on for dear life, but I couldn’t hang on to the points.

“I tried to hold on to Max, and to be honest I thought I did okay! I don’t know how many laps I held him off, but once he was past, the race was done, which is a shame.”

McLaren is set to remain at the Hungaroring for two days of 2022 tyre testing with Pirelli this week, Norris and Ricciardo sharing the duties with one day each.

Formula 1 then heads on its summer break, returning for the Belgian Grand Prix on August 27-29.