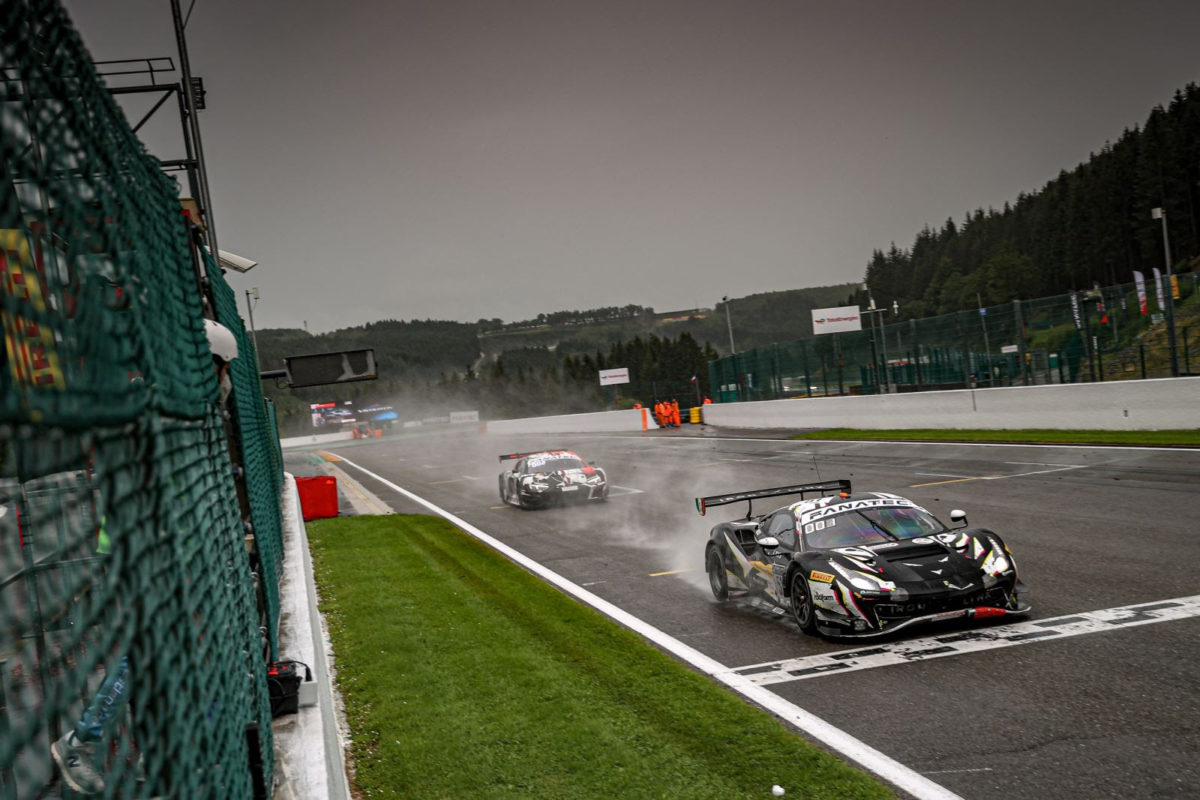 The Iron Lynx Ferrari squad has won the 24 Hours of Spa after Allesandro Pier Guidi’s astonishing pass on a wet track in the final 10 minutes.

The Intercontinental GT Challenge opener came down to a two-way fight between the #51 Iron Lynx car and the #32 Audi Sport Team WRT entry.

Dries Vanthoor had been sent with wets on the R8 LMS GT3 for his final stint, just as the heavens opened over Spa-Francorchamps.

The Belgian held second spot but the rain forced Iron Lynx to call Pier Guidi into the lane in order to bolt treaded rubber onto the 488 GT3.

The run home was set up when a crash for another 488, the #33 Rinaldi Racing entry, on the Kemmel Straight triggered a Safety Car.

With just under half an hour remaining, it was Vanthoor leading and Pier Guidi second, but there were five lapped cars between them on the road.

The latter passed that traffic in just two laps and set off after the #32 Audi, having a first crack at Vanthoor when they arrived at Les Combes with 10 minutes to go.

Pier Guidi failed to get by on that occasion but would not be denied half a lap later at Blanchimont.

In a moment of extreme bravery, the Italian went to the outside of Vanthoor on a soaked race track and was able to prise the lead away at the left-hand sweeper.

The win for Pier Guidi, Come Ledogar, and Nicklas Nielsen was the first for a non-German manufacturer at the 24 Hours of Spa in the GT3 era, and Ferrari’s first in the race since 2004.

Car #51 had started only 13th but was up to second spot inside the first four hours and led within two hours more.

Iron Lynx lost the lead before midnight (local time) due to a refuelling infringement penalty but Pier Guidi put them back on top during the darkness in the Ardennes.

Nielsen was behind the wheel when he was held up by traffic and came under attack from Kelvin van der Linde in the #32 Audi in the final four hours.

The South African lunged up the outside at The Bus Stop and then barely kept control of the R8, but emerged still in second spot.

Pier Guidi was soon installed in the Ferrari and Vanthoor in the Audi which was also piloted by Charles Weerts, as those crews continued their fascinating duel until the final few minutes.

The only other car on the lead lap, that being the 556th, after 24 hours of racing was the #95 Garage 59 Aston Martin Vantage AMR GT3 of Nicki Thiim, Marco Sorensen and Ross Gunn.

West Australian Jordan Love was 21st outright and fifth in the Silver Cup class in the #40 SPS Automotive Performance Mercedes-AMG GT3 which he shared with Miklas Born, Yannick Mettler, and Lance David Arnold.