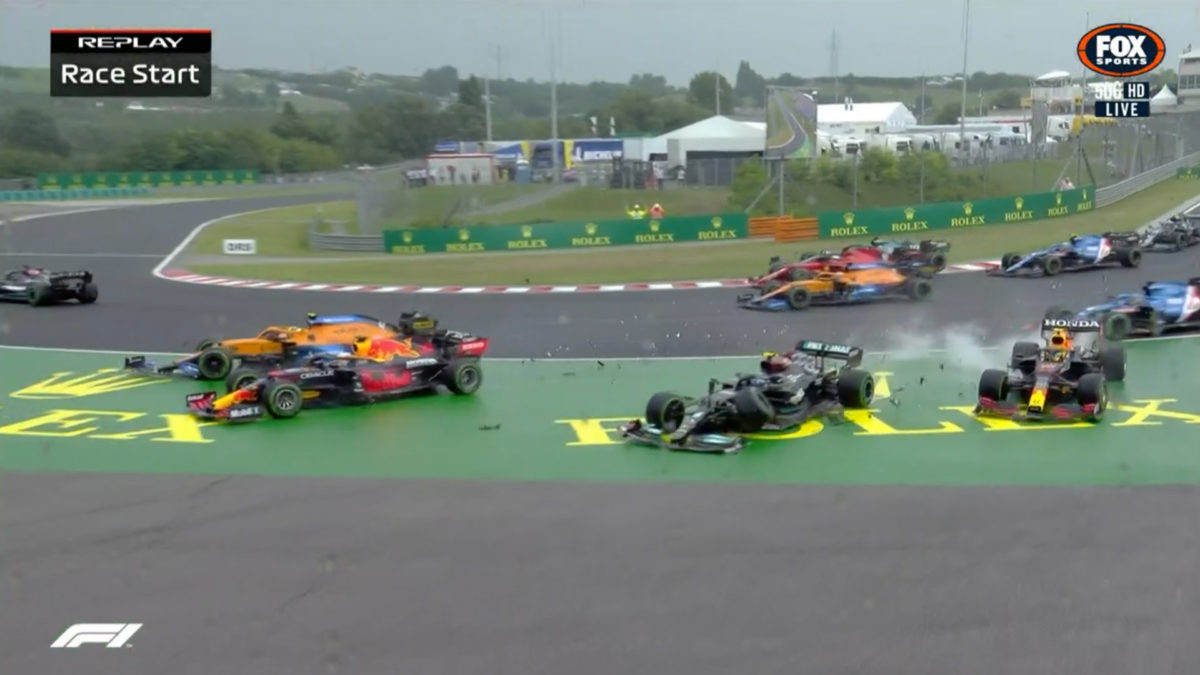 The field scatters at the opening corner. Picture: Fox Sports

Valtteri Bottas and Lance Stroll have both picked up penalties for their roles in the calamitous opening corner to the Formula 1 Hungarian Grand Prix.

The field found itself skittled at the first turn as both Bottas and Stroll misjudged their braking in tricky wet conditions.

In the former’s case, that saw the Mercedes nose into the rear of Lando Norris’ McLaren, which then made heavy contact with Max Verstappen.

Stroll made contact with Charles Leclerc, the Canadian making the grass on the inside of the corner as he desperately tried to pull up the Aston Martin.

Also caught up in the incident were Daniel Ricciardo and Sergio Perez, the latter having to climb from his car half a lap later.

Both Bottas and Stroll were summoned by the stewards, who dished out a five-place grid penalty for each at the next race.

“Immediately after the start, in the braking zone to turn 1, car 77 collided with the rear of car 4,” the stewards report stated of Bottas’ role.

“The Stewards took into consideration the track conditions however the driver of car 77 was fully to blame for the collision.”

It was the same for Stroll, who was found fully to blame for his contact with Leclerc.

In total, five drivers were eliminated from the race in the opening corner melee.

Norris was retired by McLaren during the resultant red flag, while Bottas, Stroll, and Leclerc all retired on the spot – the latter limping his car to Turn 2.

Along with the grid penalties for the Belgian Grand Prix, both Bottas and Stroll picked up two points on their licence.

It took the former’s tally to four in the 12-month period, and the latter to six.

Formula 1 now embarks on its summer break, returning at Spa-Francorchamps on August 27-29.