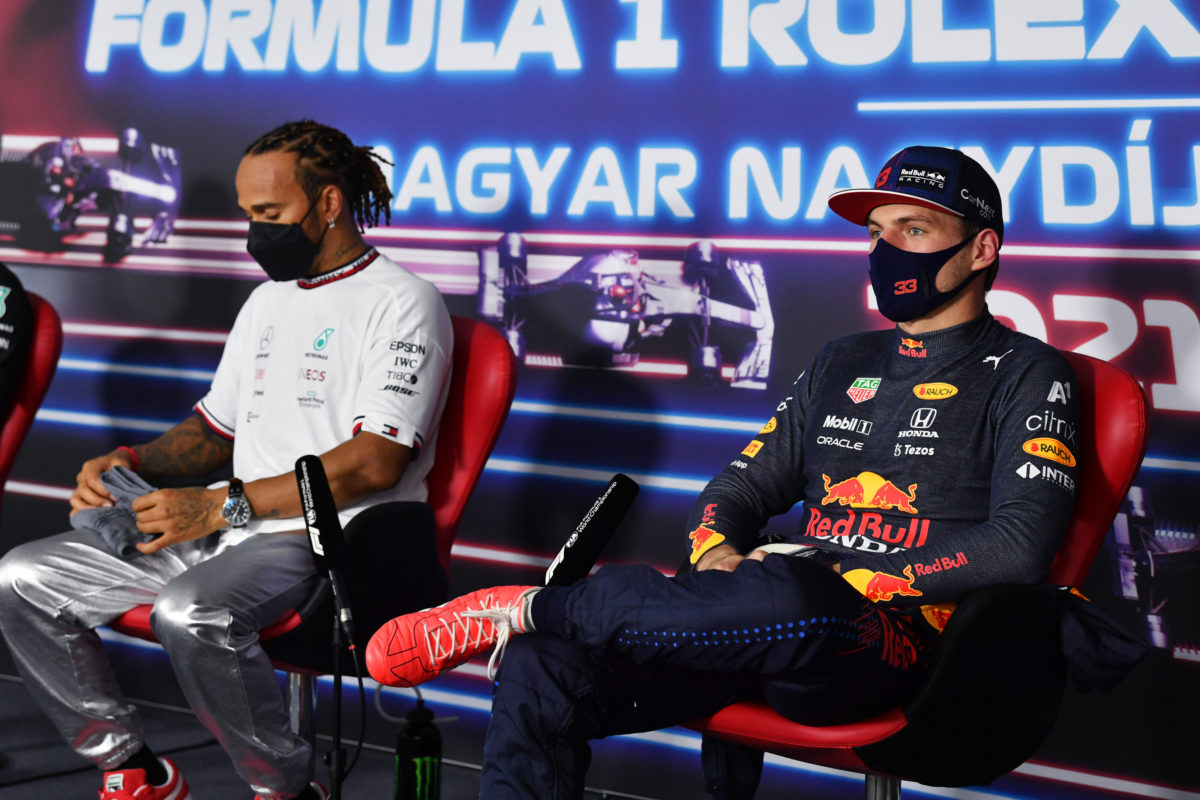 Max Verstappen with Lewis Hamilton during the post-qualifying press conference

Max Verstappen reacted with an angry outburst after being asked about his clash with Lewis Hamilton at the Formula 1 British Grand Prix two weeks ago.

The incident occurred during the FIA Press Conference which followed qualifying for the Hungarian Grand Prix on Saturday afternoon, the line of questioning turning to address both Verstappen and Hamilton.

“I’ve got a question for both you [Verstappen] and Lewis now,” began host Tom Clarkson.

“There’s been a lot of talk about what happened on the opening lap at Silverstone. If you two end up wheel-to-wheel after the start tomorrow…”

However, Verstappen cut the question short.

“Now, can we just already stop about this because we had so many fucking questions about this, it’s just ridiculous,” he said.

“Honestly. Honestly, the whole Thursday, we’ve been answering this stupid shit all the time. So can we just stop about this?

“We are racers, we will race. Of course we’re going to race hard but fair, so we keep pushing each other.”

Tensions within the F1 paddock have been building since the British Grand Prix, with Red Bull and Mercedes seemingly on the brink of war.

Their respective team bosses, Christian Horner and Toto Wolff, have served to do little but broaden the divide between the two teams.

Red Bull has been accused of using its right to review the Silverstone incident as a psychological game, given the low percentage chance it had of a successful outcome.

Conversely, Wolff claimed Mercedes attempted to calm the situation by issuing a statement claiming the situation was an attempt to tarnish the reputations of both Hamilton and the team.

Having avoided the media following the crash, courtesy of being taken to Coventry hospital for further checks, Thursday in Budapest offered the first opportunity the media had to question Verstappen of the incident.

He fronted the press alongside Lando Norris on Friday, and was on the receiving end of 16 of 18 questions in the 15-minute session.

The 23-year-old was quizzed about comments he made regarding Hamilton’s celebrations in Silverstone, with the line of questioning barely straying from the Copse crash.

Hamilton’s session was similar, with questions largely centred on his ongoing battle with Verstappen and the fall out of the British Grand Prix.

The pair are split by eight points in the championship, with Verstappen currently holding the advantage, his lead having been 32-points heading into the previous event.

The Red Bull driver will start third in the Hungarian Grand Prix, directly behind pole-sitter Hamilton, when race gets underway at 23:00 AEST.