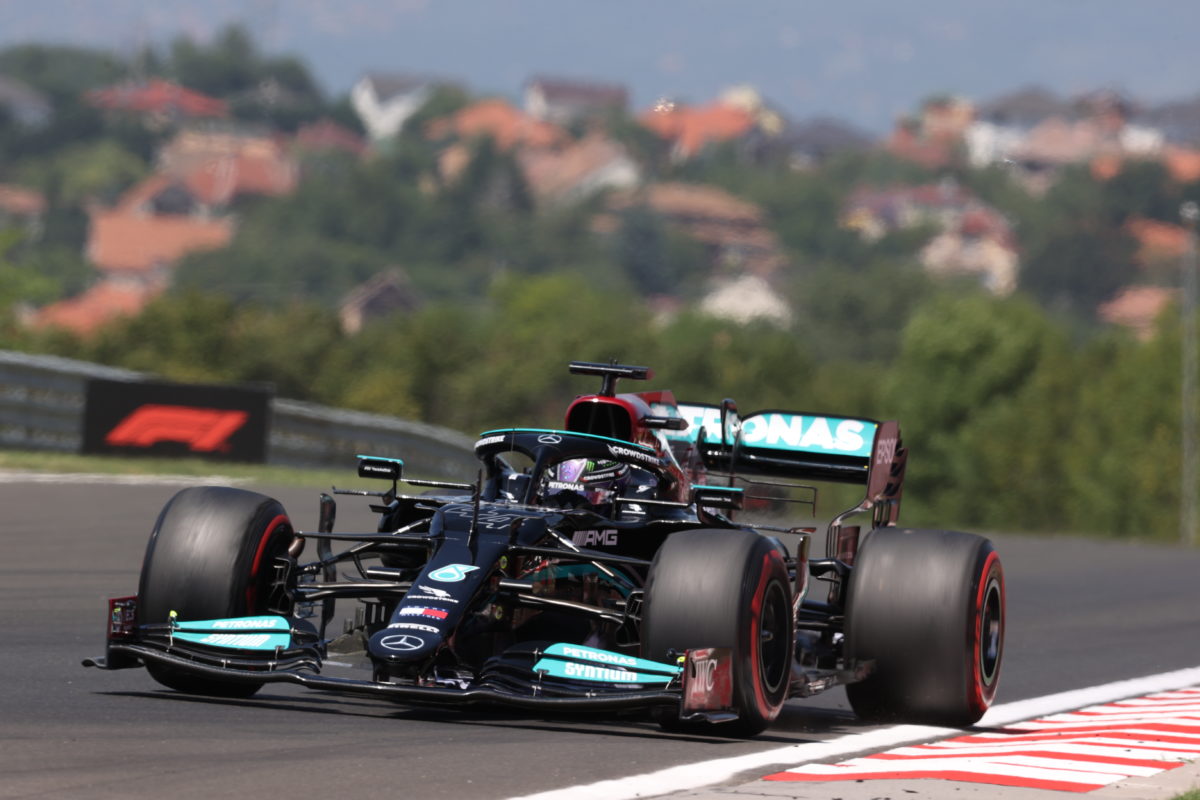 Lewis Hamilton has headed the pack in the final practice session for the Formula 1 Hungarian Grand Prix.

The Mercedes driver held a slender advantage over Max Verstappen at the end of the session, Red Bull having clawed back some of the deficit it had at the end of Friday’s running.

It was then Valtteri Bottas third best from the two Ferraris, while Sergio Perez was only seventh and a second down on team-mate Verstappen.

As has become established practice, both Haas drivers were first out on an otherwise silent track as the session began.

Yuki Tsunoda was also out early, the AlphaTauri driver looking to make up for the time lost after his crash in Free Practice 1.

It was a similar case for Carlos Sainz, who was on track with a new power unit in his Ferrari following his overnight change.

Only after more than 12 minutes had elapsed did Hamilton head out on track for a qualifying trim.

His lap was dominated by oversteer, especially at the final turn as he slid side of the apex to log a 1:18.587s.

Verstappen’s opening lap of the session was a 1:17.510s, set more than 20 minutes into the session.

Importantly, it was a far tidier lap than Hamilton had managed, with an improved balance to that he’d struggled with on Friday.

While the Red Bull driver’s effort left him fastest, it didn’t stand for long as Bottas recorded a 1:17.428s, seven tenths clear of Hamilton.

The middle part of the session saw the Hungaroring come alive with every driver having completed at least one timed lap.

Down the order, Daniel Ricciardo found himself just 18th fastest at the halfway point of the session as he focused on medium compound tyres.

He climbed up the order to 14th soon after as he validated the setup changes made overnight prior to beginning a full qualifying simulation.

Soon after, Mick Schumacher found the wall to draw the red flag.

The Haas driver lost the rear of the car at Turn 11, sliding broadside into the tyre barrier.

It was a hefty impact, leaving the car with damage to both ends, the German apologising to his team before adding “I know what that means,” suggesting he’ll miss qualifying as a result.

Proceedings resumed with nine minutes remaining, those heading out on the soft compound tyres.

Stuck in the garage was Verstappen, with attention turned to the DRS actuator on the Dutchman’s rear wing.

His delay was temporary and he joined the queue heading out on track with seven minutes remaining.

There was a near miss in the pit lane when Antonio Giovinazzi was sent out as Lance Stroll approached the Alfa Romeo garage.

The pair made glancing contact, Giovinazzi’s front wing with Stroll’s right rear, with officials immediately announcing it would be investigated post-race.

While that marked an improvement over his own personal best, Hamilton soon went faster still with a 1:16.826s to depose his title rival.

Ricciardo had also improved, the Australian rising to eighth best with a 1:17.942s, just under two tenths down on McLaren team-mate Norris.

Hamilton ended the session fastest, less than a tenth clear of Verstappen, with Bottas third.

Then came the two Ferraris, first Sainz and then Charles Leclerc, from Norris, a sluggish Perez, Ricciardo, Fernando Alonso, and Stroll.