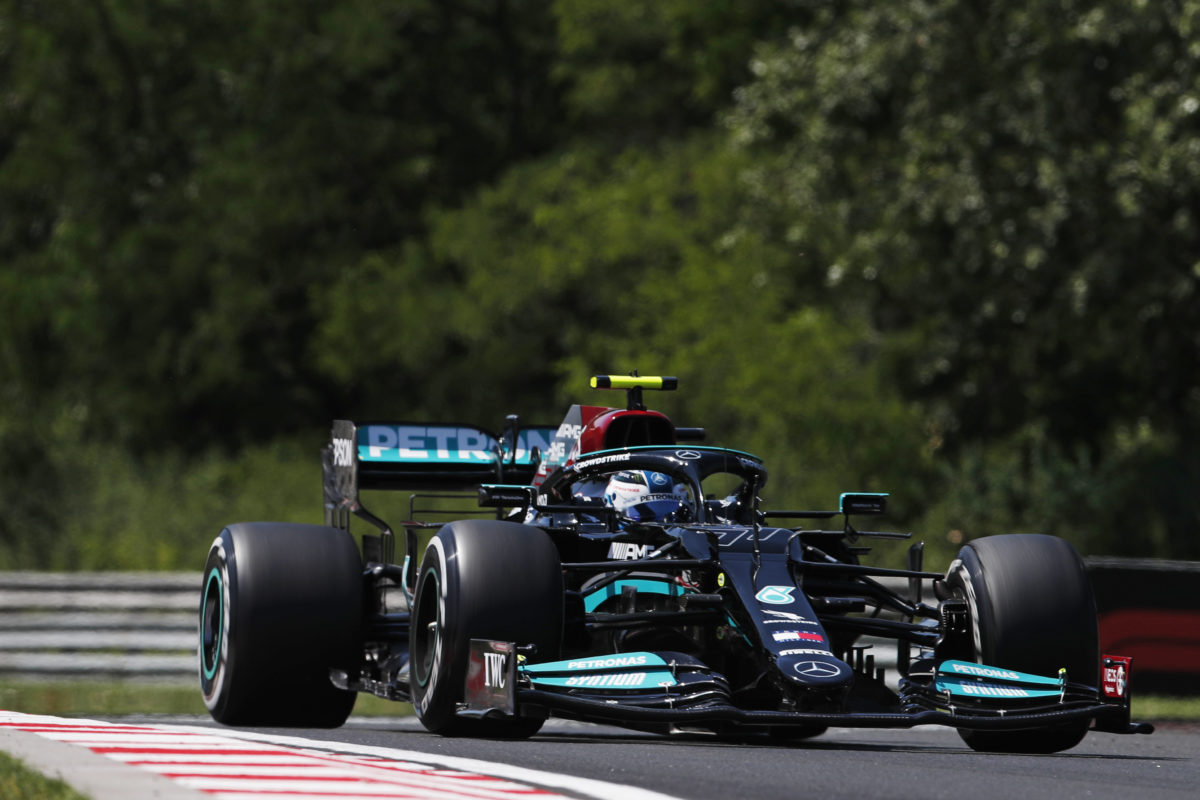 The pair recorded near identical times to top the session, pulling clear of Max Verstappen after the Dutchman had topped Free Practice 1 earlier in the day.

Temperatures had increased as the greenlight opened pit exit for Free Practice 2 in comparison to the earlier 60-minute session, with the mercury having risen to 33 degrees.

One of those not heading out was Yuki Tsunoda, the AlphaTauri team working feverishly at the rear of his car following his FP1 crash.

Like he had in opening practice, Verstappen’s delayed start resulted in a solid first timed lap, a 1:19.581 to open his account which left him second fastest.

Sebastian Vettel shot to second best with a 1:18.228s, set on the red wall tyres, leaving the Aston Martin just 0.088s off the leading Mercedes.

It came as qualifying simulations began once more, Pierre Gasly evidencing that by promptly banking the fastest time.

Mercedes then stamped its authority on the session, Hamilton going almost half a second fastest to the first split, an advantage he’d extended to 0.8s at the second interval.

Verstappen’s qualifying effort was someway off what the two Mercedes could do, much of that gained in the final third, but the Dutchman looked to have struggled with understeer.

With the early running having taken place on the medium compound tyres, the times set on the softs suggested a one-second delta between the two compounds.

Around a relatively short lap, it’s a point that could prove crucial in qualifying, and the second segment of the session in particular as the leading protagonists look to the start of the race.

Race runs soon became the focus of teams’ energies with evaluating the medium and soft compound tyres, only Nicholas Latifi and Nikita Mazepin on track on the hard rubber inside the final 15 minutes.

Running the medium compound tyres, Hamilton had a snap of oversteer at Turn 11.

The Mercedes driver was able to catch the car, running through the tarmac run off before carrying on and reporting that his tyres we giving up the ghost, the left-rear in particular.

With two minutes left on the clock, AlphaTauri sent Tsunoda out on track.

He had a new set of soft tyres fitted to his car, with time allowing him a single flying lap before the chequered flag fell.

The session then ended with the Japanese driver 17th best, 2.6s slower than Bottas after his sole timed effort, with the Finn 0.027s up on team-mate Hamilton.

Struggling with understeer, Verstappen was 0.3s further back, the only driver in touching distance of the top two.

Esteban Ocon was fourth best, 0.747s off Bottas, with Perez half a tenth slower than the Alpine runner.

Daniel Ricciardo slumped to 13th fastest, 1.7s away from the ultimate pace and 0.4s away from his McLaren team-mate.

Another hour of practice remains before qualifying for Sunday’s race, Free Practice 3 set to begin at 20:00 AEST tonight.