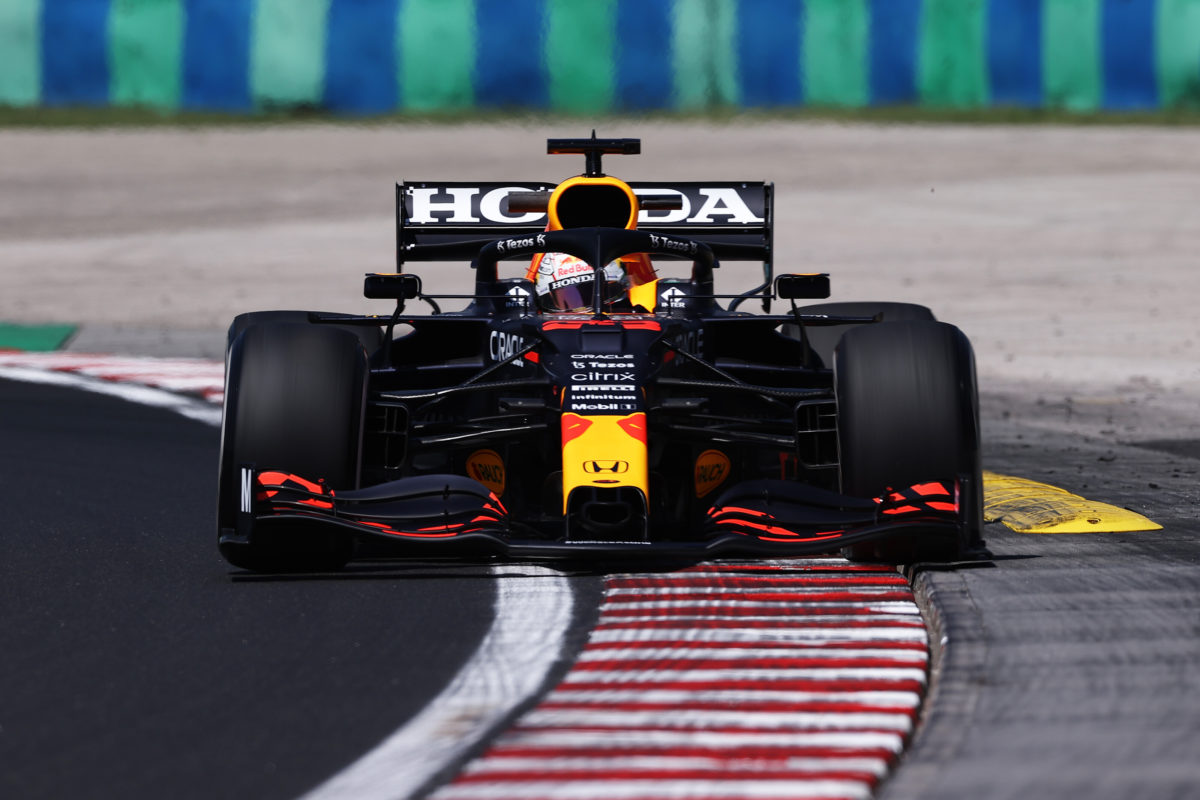 Max Verstappen has topped the opening practice session for the Formula 1 Hungarian Grand Prix though had little in hand over Mercedes.

The Red Bull driver ended the session just 0.061s clear from Valtteri Bottas, Lewis Hamilton third, 0.167s further back, the top three the only ones to drop into the 77-second bracket.

A busy start saw all but the two Red Bull drivers immediately on track, the Milton Keynes duo keeping their powder dry for the first five minutes before heading out.

Carlos Sainz and Lance Stroll had a brief exchange, the Ferrari driver leaving little room for the Aston Martin under braking for the first corner.

Stroll then found himself elbowed off the road further around the turn as they ran side-by-side through the corner.

Fernando Alonso had a spin at the highspeed Turn 4, the Alpine driver losing the backend of the car on corner exit.

It left large flat spots on the tyres, the Spaniard touring back to the garage otherwise unscathed.

Soon after, Yuki Tsunoda had an off at Turn 9 to trigger a brief yellow flag as he gathered the AlphaTauri up to continue once again.

The early pace belonged to Verstappen on a 1:19.025s, the Dutchman sporting the power unit which was fitted to his car when he crashed out of the British Grand Prix.

Second fastest was Bottas, the Mercedes driver 0.6s slower than the leading Red Bull with a 1:19.694s.

The Finn did move to the top around the halfway point in the session as he completed a qualifying simulation run.

He recorded a 1:17.616s, a time 0.3s quicker than Hamilton managed on his own run on the red-walled tyres moments later.

The qualifying simulation phase of the session painted a muddied picture, with AlphaTauri and Alpine initially showing better pace than Ferrari and McLaren.

In the latter’s case, Lando Norris appeared to struggle with a lazy front end as he recorded a 1:18.649s.

That left him 0.3s slower than Charles Leclerc, suggesting the Woking squad was somewhere close to their constructors’ championship rivals, at least until Sainz logged a 1:18.115s to go third fastest.

With 19 minutes remaining, the red flag was shown when Tsunoda found the wall at Turn 4, the rear end having snapped away as he backed into the tyre barrier.

Initially covered under double waved yellow flags, the red was shown soon after.

The session resumed with just under 14 minutes remaining, cars slowly returning to the circuit.

Among them was Verstappen with a set of soft compound tyres bolted on for his first qualifying simulation.

The Dutchman’s lap was rapid; fastest of anyone to the second split and ultimately strong enough to go fastest – a 1:17.555s scarcely less than 0.1s quicker than Bottas.

It was a composed effort, his time made in the final two thirds of the lap versus the Mercedes after losing out to them to the first split.

With four minutes remaining, Sergio Perez completed a quali sim which left him just eighth fastest, 0.9s down on Verstappen and 0.5s away from where he could add value for Red Bull.

It was a session where little separated Verstappen and the two Mercedes, with Ferrari seemingly third best with McLaren struggling by comparison.

AlphaTauri showed well with Gasly, though Tsunoda will not have endeared himself with another shunt, while Alonso offered promising signs for Alpine.