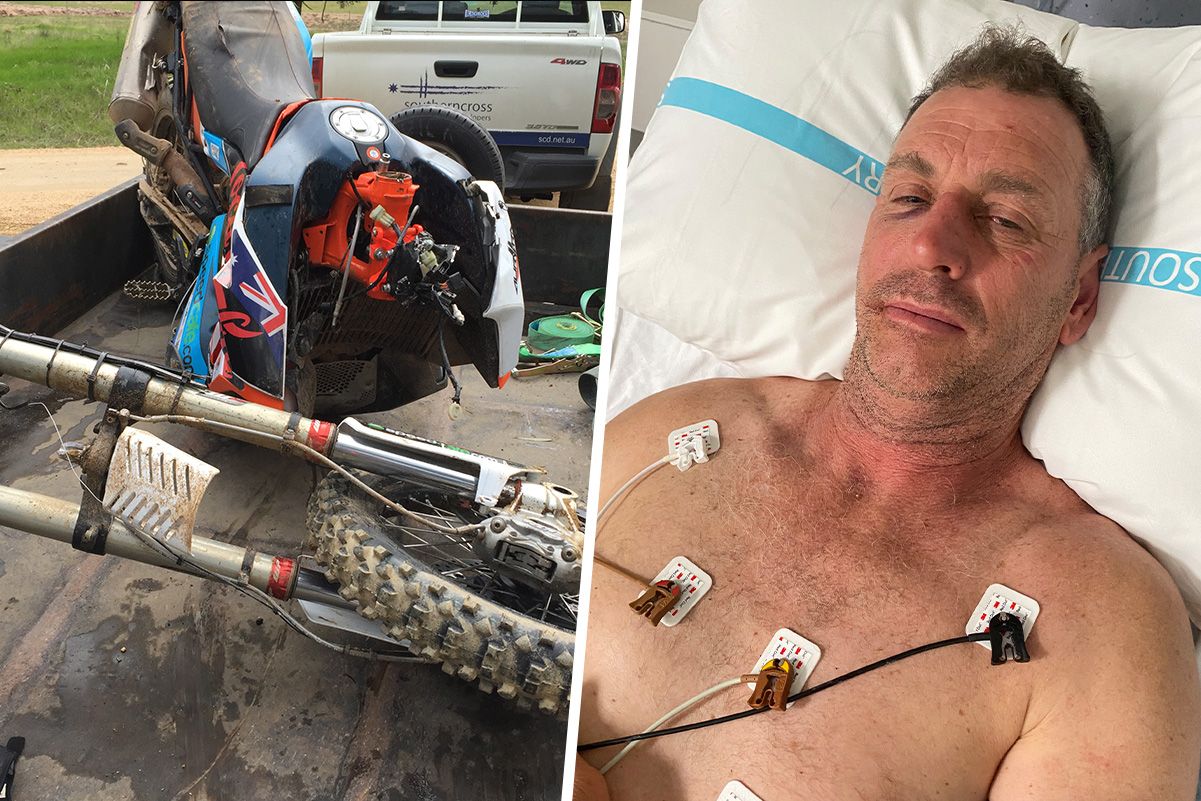 Andrew Houlihan in hospital (right) and his damaged bike (left)

Australian Safari rider Andrew Houlihan has survived a massive high-speed training accident, but says he will be competing in the next Dakar Rally in Saudi Arabia from January 2-14.

Houlihan was travelling at close to 160kph (100mph) on private dirt tracks in the Riverina when he came over a rise and hit two kangaroos.

The impact broke his 890 KTM Rally in half and catapulted him more than 70m from the impact point.

His training partners found him unconscious when they arrived on the scene several minutes later and immediately contacted emergency services.

He was transported to the Albury Base Hospital, but checked himself out and is now recovering at home in Albury.

Houlihan finished 50th in the bike section of his debut Dakar event in January and his application for his second appearance with Nomadas Adventure was approved just last week.

Despite his injuries, which include fractured ribs, a punctured lung and broken bones in his hands, Houlihan was his normal low-key self when contacted by Speedcafe.com.

Houlihan, who is regarded as one of the toughest sportsmen that Australia has produced, was his normal positive self.

“Yeah, we had a minor setback and cleaned up a couple of kangaroos,” said Houlihan, who is sponsored by Speedcafe.com.

“I have some minor injuries, but nothing too bad.

“I need a new bike, helmet and gear after the ambos had to cut them off me, but that can be easily fixed.

“I am so grateful to everyone who helped me after the accident and to my family who have rallied around me and who are working hard with me on my recovery.”

Houlihan has already been in contact with Future-Sport Motorcycles in Townsville, who have committed to building him a new KTM 890 Rally training bike as soon as possible.

Future-Sport Motorcycles delivered Houlihan his current bike several weeks ago and the 52 year-old had clocked up thousands of kilometres in all sorts of conditions before his accident.

“The guys at Future-Sport have been fantastic and are already well and truly on the case,” said Houlihan.

“I am hoping I can be back on the bike in three or four weeks to continue my 2022 Dakar preparations.

“Obviously we will be re-evaluating the training plan between now and when we head back to Saudi Arabia at the end of the year.”

He only put his mind to enduro rallying a couple of years ago with the dream of getting a start at Dakar.

Speedcafe.com documented his amazing journey to his first Dakar start in a five-part series last year.

Part of that journey included a major accident in the Hellas Rally of Greece in 2018 which required months of recuperation and would have ended the “dream”of most riders before it had started.

He finished 50th outright in the bikes section of this year’s Dakar, despite breaking his wrist at about the midway point of the rally.