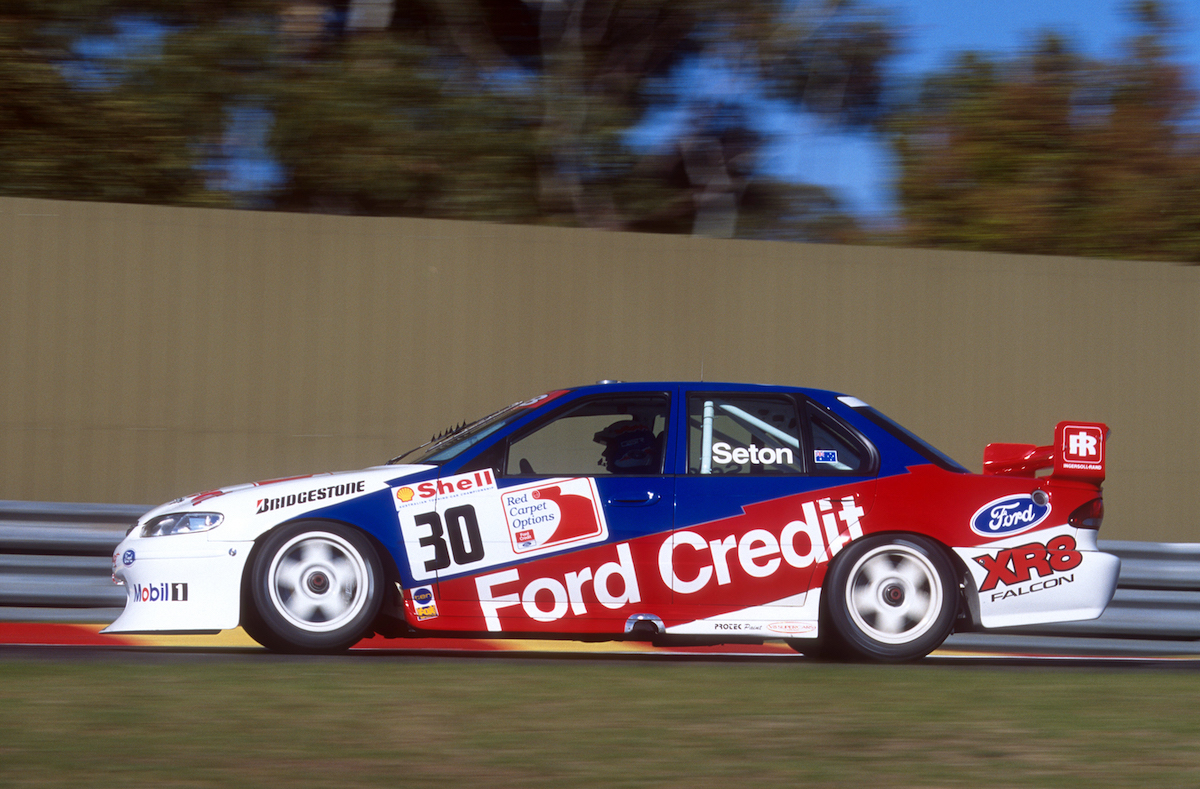 The title-winning Seton Falcon up for grabs. Picture: AN1 Media

Little did Glenn Seton know that when he bolted together his new EF Ford Credit Falcon for $150,000 (including engine) in 1996 that it could potentially be worth $1 million-plus 25 years later.

They are the sort of numbers that are being thrown around with just a week remaining before Seton’s 1997 Australian Touring Car Championship winner goes under the hammer at Lloyds Auctions.

The famous Ford Credit Falcon has been put on the open market for the first time through Lloyds Auctions and will go under the hammer this Saturday (July 31) at noon.

The car is the latest in a list of famous Australian touring cars and road cars which have been auctioned by Lloyds and potential buyers can bid here.

“The market for these types of cars has been going crazy in recent years, incredible really,” said Seton.

“Not in my wildest dreams did I think this car could one day be worth a million dollars or more when our small team built it back in 1996.

“It was quite a unique car for us at the time and it obviously means a lot to me as a championship winner.”

The car, which comes in the original championship-clinching Ford Credit colour scheme and carries chassis number GSR7, has been put up for sale by long-time Seton fans Noel and Wendy Willoughby, who purchased it in 2004.

The car comes with a CAMS logbook (third edition), Seton’s famous open-faced Championship helmet, race suit and a 1997 ATCC Championship Shell Series banner all signed by Seton as well as letters of authenticity from the former champion.

Noel and Wendy Willoughby were Seton fans from early in his career and remain good friends to this day.

“The whole thing started when they (Noel and Wendy) presented me with a framed piece of all my race cars to that point of my career and we just became friends,” said Seton.

“The picture is still in my house and we have stayed with each other many times.

“When Noel decided he wanted to buy the Falcon we wanted to ensure we could get it to as close to 100 percent original as possible and it could not get any closer.

“Noel and Wendy have done a great job with it and have been terrific custodians of the car and I hope they get a great price for it as a reward for the way they have cared for it.

“It has been better than money in the bank for them, but I guess we will find out how good the interest rate has been when it goes to auction at the weekend.”

Lloyds also announced last month that they are now accepting cryptocurrency as payment on purchases.