April 17, 1994. The day that Greg Murphy will forever remember when Boost Mobile boss Peter Adderton set him on the path to Supercars success.

It was by chance that Murphy would meet Adderton competing one weekend at Sydney Motorsport Park.

In the weeks prior, the then 21-year-old had claimed second in the New Zealand Gold Star Championship, the country’s premier single-seater title for Formula Holden machinery.

For all intents and purposes, Murphy was a weekend warrior and nowhere near the point of going pro at that point.

His season was all but over despite having just won the New Zealand Grand Prix at Manfeild Circuit Chris Amon.

As Murphy recalled, “It was like, ‘Okay, I’ve won the biggest race in New Zealand and I’ve made a small name for myself in the motorsport scene in New Zealand, but what the f*** do I do now? What happens?’”

As it would transpire, an opportunity to race in Australia would be forthcoming to compete in the Australian Drivers’ Championship.

With what little sponsorship he had at the time, a deal was done, though nothing beyond the first round at the then known Eastern Creek Raceway was planned.

Nevertheless, Murphy wanted to make the most of the opportunity, and a test one week out from the event was organised to put him in good stead. “Long story short, we decided we’d go do that first round,” said Murphy, who raced a Ralt RT23 Formula Holden that weekend.

“We put a deal together. We did it on a shoestring budget. We turned up the week before and got Adrian Gamble who engineered me in New Zealand in the Biranna car – we got on really well – we got him to engineer the Ralt.

“We spent two days at Eastern Creek doing some testing and arrived for the race meeting prepared; qualified on pole, and won both races.

“We were sitting there at the end of it going, ‘Right, well, we’ve got no money. Well done. Thanks, boys. That was great. What now?’ And then he walks in.”

“And I mean, why? I’ve never asked him why he walked in the garage. I don’t know. But he was paying attention. He paid attention and he wandered in.

“I remember, I was sitting looking at the car, the trophies were sitting on the car for the weekend and we were all patting ourselves on the back.

As Adderton explained, he had been at Eastern Creek Raceway that weekend looking for an up-and-coming driver to compete in his Australian Super Touring Championship.

“I looked at his talent and how fast he was, I couldn’t believe the speed that he was showing in that car amongst some very big teams,” Adderton told Speedcafe.com.

“I was looking for a new, young driver to put in our Super Touring series, and he was just so fast. I mean, ridiculously fast. That’s why we chose him.

Murphy explained, “I was pretty fresh to it all. I would believe anything anyone said.

“It was Bruce Miles’ Toyota Carina that was James Kaye’s car from the 1990 championship in BTCC, which was [sponsored by] Park Lane. Roland Dane owned the company that was on the side of that car from 1993.

“This car turns up. It gets intercepted. Bruce Miles was just taking it back to New Zealand. It turns up at Phillip Island and Campbell Little is there engineering it because he’s a mate of Bruce’s.

“The thing caught fire in the pit lane on Saturday. And that’s it. It went from there. Then my first Bathurst, that was in 1994, was because of Peter. That’s it.” 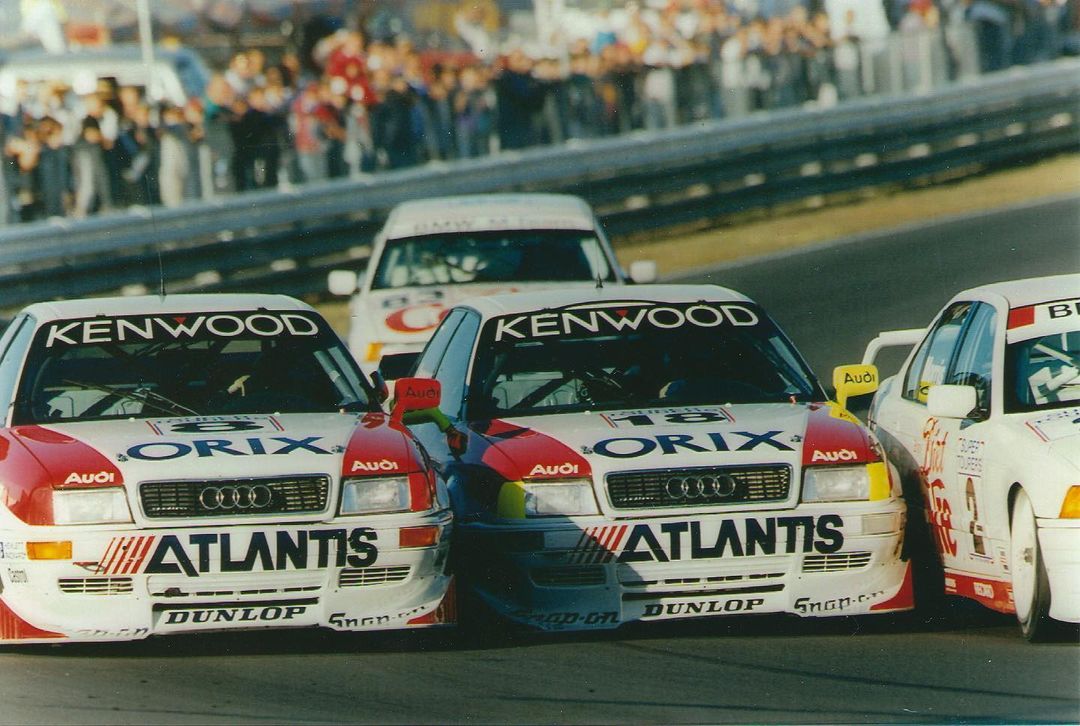 Two years in the series followed racing Audis before being picked up by the factory Holden team.

Murphy said his relationship with Adderton is significant and credits him for the success he went on to achieve, winning the Bathurst 1000 four times as well as that renowned Lap of the Gods.

So 27 years later when he came calling to field a wildcard in the Great Race, the 48-year-old had little reason to say no.

“I don’t know what would have happened if he hadn’t walked through the door that day,” said Murphy.

“This is the thing. You’re in the right place at the right time and you made the most of an opportunity.

“He turns up and goes, ‘I want to give you a shot’. That’s it. There’s nothing more.

“When he comes and says, ‘Remember what I did for you?’… ‘You’re going to use that card?’ Yep. he’s gonna use that card.

“We have a significant connection. Absolutely.”