For the first time in Formula E history, the all-electric single-seater series raced under the roof of ExCeL London.

Initially, it was Mahinda Racing’s Alex Lynn who led from pole position into the first turn.

However, it was during the dual Attack Mode sequence that Dennis stormed to the lead with a pass on Lynn who looked up at Turn 10.

“After such a strong qualifying, to now get the win is just sensational,” said Dennis.

“I made a special helmet for this weekend, a British helmet and I’m just over the moon. It was a brilliant job by the whole team.

“We took a risk with the strategy, we could have played it safe but we felt like we had better pace than Mahindra and it paid off.

“Because it wasn’t such an energy limited race, I could do five laps fully pushing and this allowed me to create the gap to Lynn.

“I just needed three qualifying type laps and managed to do it and get that two-second gap and take the win. I’m over the moon.” 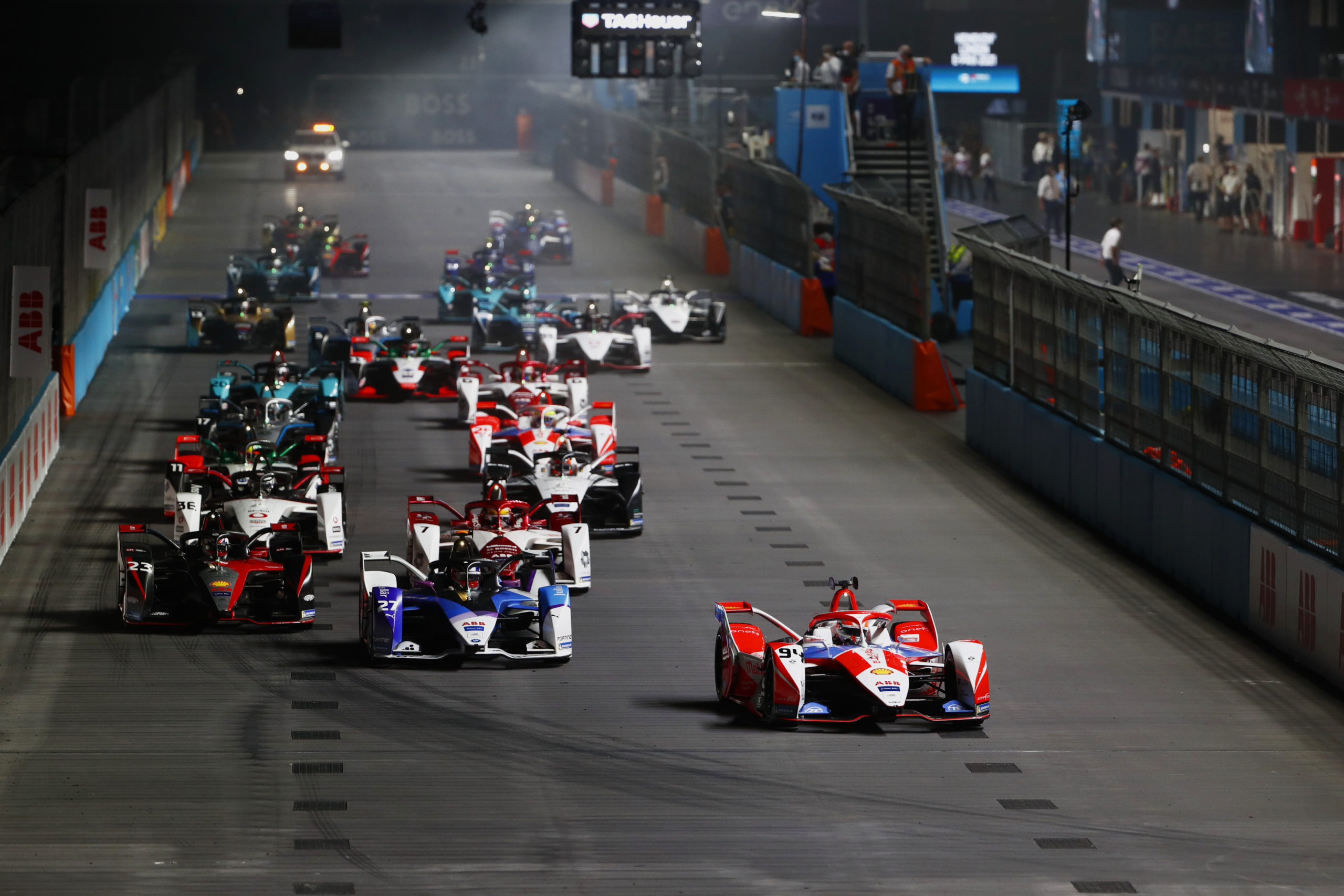 Alex Lynn leads Jake Dennis and the rest of the field at the start. Picture: Sam Bloxham

Lynn led the field into Turn 1, covering advances by Dennis while Nissan e.dams driver Sebastien Buemi watched on in third.

It wasn’t long before the carnage kicked off as Lynn’s Mahindra Racing team-mate Alexander Sims got hung out to dry and hit the outside wall as the cars exited the stadium section.

With Sims’ car stranded at Turn 6, the Full Course Yellow was deployed to retrieve the stricken car.

Championship leader Sam Bird pitted at the end of the opening lap to fix his Jaguar. Shortly thereafter, the sister Jaguar entry pitted as well.

Evans would return to the race and finish 14th while Bird recorded his fourth DNF of the season.

Lynn and Dennis would skip away from third placed Buemi who had Lotterer and a hard-charging De Vries in his mirrors.

De Vries was given a free-kick when Lotterer ahead of him missed the Attack Mode activation marker, requiring him to have a second crack and ceding position to the Dutchman.

At the front of the field, Lynn would jump first to take his second allotment of Attack Mode, handing Dennis the lead.

Dennis was given a reprieve when Lynn locked up at Turn 10, allowing the BMW driver to maintain first place when he took his second helping of Attack Mode.

Come Lap 26, De Vries would usurp Buemi and then Lynn on Lap 29.

By the chequered flag, Dennis had extended his advantage out to 5.0s over De Vries while Lynn was another 1.6s behind in third.

Round 13 of the FIA Formula E Championship, the London E-Prix, at ExCel London gets underway tonight at 23:04 AEST.