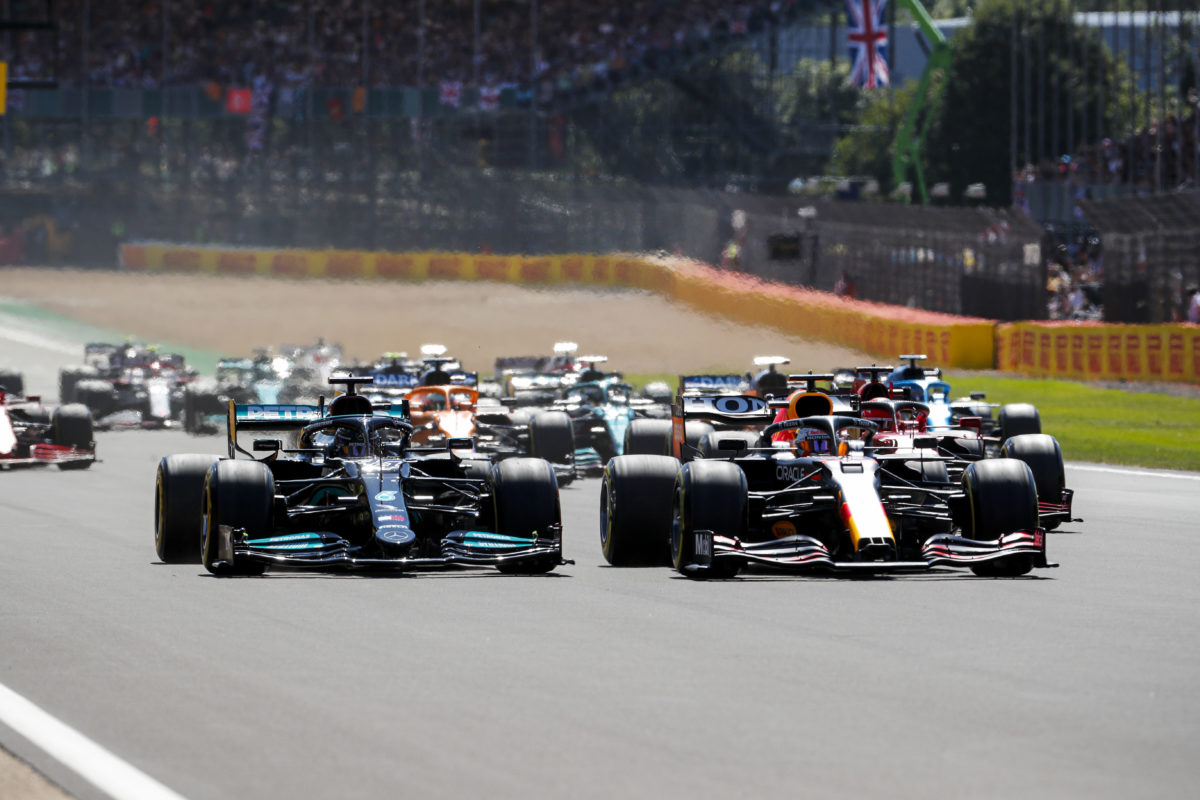 Hamilton alongside Verstappen on approach to Abbey

Lewis Hamilton has defended his role in the incident which saw Max Verstappen suffer a race-ending 51G crash on the opening lap of the Formula 1 British Grand Prix.

The Mercedes and Red Bull drivers came together midway around the first lap, touching wheels entering the high-speed Copse right-hander.

Verstappen was sent off the road as a result of the clash, the impact with the tyre wall such that the Dutchman was sent to a local hospital for precautionary checks.

Slapped with a 10 second penalty for his role in the incident, and heavily criticised by Red Bull team boss Christian Horner, Hamilton defended his involvement in the crash.

“Obviously [I] got a good start and I was chasing down Max, similar to yesterday,” Hamilton began.

“Obviously, alongside him into [Turn] 6, but I had to concede.

“Then I got a great tow down to Turn 9, and yesterday I went down the left-hand-side and I really regretted not going for the gap that was still on the right-hand-side.

“I was pretty far up alongside him but I then could see he wasn’t going to back out, and we went into the corner and then we collided.

“Of course, that’s never the way that I ever want to win a race, or just in general to race, and but these things do happen.”

Adding further spice to the incident was the comparative championship position of the two drivers.

Verstappen had won the previous four grands prix, while Hamilton’s last success had come at the Spanish Grand Prix in May.

That had seen the Red Bull driver edge away to a 32-point advantage in the championship.

After being beaten to pole position in Sprint Qualifying on Saturday afternoon, the opening lap offered the seven-time champion his best opportunity to gain the upper hand on his title rival.

It was the Saturday result which spurred Hamilton into the aggressive move, the Brit denying there was a deeper seeded issue at play in his decision making process.

“I think it’s a normal battle,” he explained.

“When I was younger, of course, I was probably as aggressive… maybe actually not as aggressive as Max is, but I was pretty aggressive.

“I’m a lot older now, I know that it’s a marathon, not a not a sprint, and so I think I have a better view in how I approach my racing.

“But we’re in a battle and I think this year he has been very aggressive, and most of the times I’ve had to concede and just avoid incident with him and live to fight on later on in the race,” he continued.

“As you saw yesterday, once he’s out in the clear, they’re too fast, so when an opportunity comes I’ve got to try and take it.

“That’s what we’re out there doing and racing.

“This one moment, I got a great exit out Turn 7, and I was really happy with the dummy, that I was able to go to the left and then go to the inside and get up that gap, and fortunately he wasn’t able to close it.

“But unfortunately, the aggression stays from his side, and we collided.”

Speaking to the Sky Sports shortly after the race, Red Bull team boss Horner was furious.

The Brit went so far as to suggest Hamilton’s win was hollow as a result of the incident, and that hoped the seven-time champion “is very happy with himself”.

“I don’t really have anything to say to Christian,” the race winner responded.

“I mean, it doesn’t feel hollow. There’s 2000 people that work incredibly hard in my team, it’s not just about me naturally.

“This is anything that I want to happen in the race.

“I think it’s important for all of us to take a step back.

“I’m sure emotions are running high there, and I know what it’s like to lose points within a team and be in that position, so I don’t feel any way about it.”

While it was Hamilton who took the penalty for the incident, the now 99-time grand prix winner claimed he was not solely to blame for the crash.

“So I think there’s things that we can both learn.

“I would say that Max is probably one of the most aggressive drivers here, just from my personal opinion. He does a great job,” he added.

“I think we have to really try and find the best balance we always can on track with space and respect between one another so that we can continue racing and have good races without colliding.”

Hamilton now sits on 177 points in the drivers’ championship, eight down on Verstappen while Mercedes has closed to sit just four points away from Red Bull in the constructors’ championship.

Formula 1 next heads to the Hungarian Grand Prix on July 30-August 1.