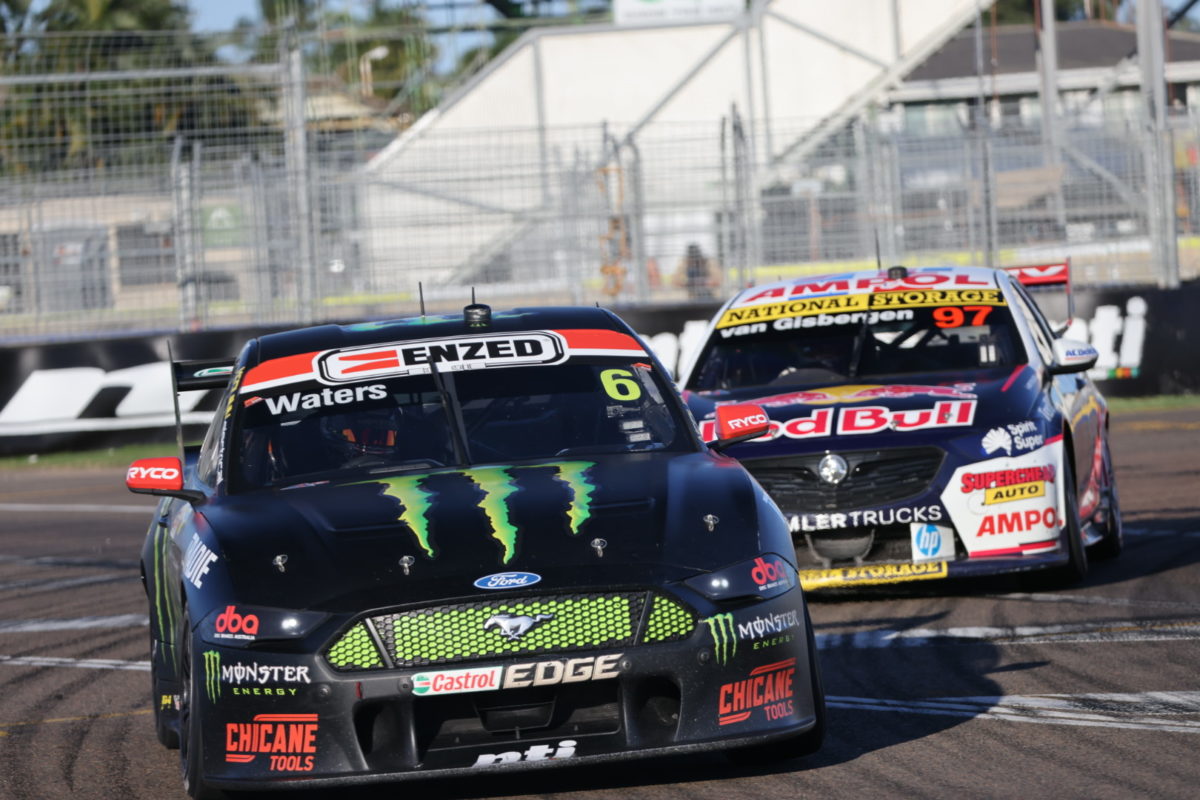 Cameron Waters has won Race 19 at the WD-40 Townsville SuperSprint after surviving major pressure from Shane van Gisbergen in the closing stages.

It looked as though Waters might have gifted the Repco Supercars Championship leader another victory when he allowed van Gisbergen to pick his pocket on Lap 5 of the contest.

However, Tickford Racing used some canny strategy during a mid-race Safety Car period to get the #6 Monster Energy Mustang back to the head of the field.

Waters was then able to make his Ford as wide as it needed to be when it mattered, and took the chequered flag 0.8757s to the good after 39 laps around the Reid Park Street Circuit, with five bonus points for the fastest lap also to his credit.

Van Gisbergen nevertheless extended his championship lead to 276 points by finishing second, one position up on where the Red Bull Ampol Racing driver had taken the restart, with the Shell V-Power Racing Team’s Will Davison completing the podium.

“I don’t really know what happened with the pit stop but we had a pretty good race car,” said Waters.

“We were kind of hanging onto Shane in that first stint, obviously came out in front of him and I was pushing as quick as I could and had an absolute mega battle with him, it was really cool.

“It’s awesome to get one on him and win the race.”

Waters had qualified on pole, sharing the front row with van Gisbergen (#97 ZB Commodore), and they made a fairly event start before the former prevailed courtesy of the inside line at Turn 2.

Waters moved a second clear of van Gisbergen in the first two laps, as a train formed behind the #97 ZB Commodore.

However, the Triple Eight Race Engineering driver put the hammer down on Lap 4, setting the then-fastest lap of the race and hacking 0.97s out of the deficit to Car #6.

That put van Gisbergen right behind Waters, before he dived down the inside and pinched first position at Turn 13 on Lap 5.

The new race leader was a second up the road within two more laps, while Macauley Jones (#96 Coca-Cola ZB Commodore) was first of the top 10 to pit when he peeled off from eighth on Lap 10 for four tyres.

That promoted David Reynolds (#26 Penrite Mustang) and Whincup to seventh and eighth respectively before they pitted a lap later, the former for working side tyres and the latter for rears.

Davison was into the pits from third on Lap 13 and grabbed three fresh hoops, emerging as first of those who had pitted, as expected.

The complexion of the race changed when a Safety Car was called on Lap 18 due to Jones hitting the wall at Turn 10, at which time van Gisbergen led by 1.63s.

Van Gisbergen and most others pitted but Waters, Hazelwood, and Nick Percat (#8 R&J Batteries ZB Commodore) stayed out initially.

However, they managed to beat the Safety Car itself to the timing line and were able to complete another lap at speed before they filed into the lane.

Waters therefore nabbed the race lead back, despite taking three fresh tyres just as those around him had done, with Davison occupying second after his quick, prior pit stop which also undercut van Gisbergen.

Percat was 13th due to the stack behind Hazelwood and Chaz Mostert (#25 Mobil 1 Appliances Online ZB Commodore), who lost positions in the opening stages and then got stacked under Safety Car, sat 23rd.

The restart came on Lap 24, when Hazelwood dived past Reynolds at Turn 2, and van Gisbergen went down the inside of Davison at Turn 10.

Waters, however, was busy resetting the fastest lap as he bolted to a 1.67s lead over the chasing pack.

Reynolds slowed and then pitted on Lap 29 with an apparent mechanical drama as van Gisbergen brought the margin to #6 back under a second, and was just about up to Waters’ rear bumper on Lap 31.

The Tickford driver blocked hard a number of times, before there was light contact when van Gisbergen showed the nose at Turn 13 on Lap 33.

They dragged up Boundary Street but Waters was able to hold his position due to being able to take the inside into Turn 2.

As it turned out, that was what settled matters, meaning a second win in as many days for Car #6 and a third of the season to date.

Van Gisbergen finished a touch under half a second ahead of Davison, with Hazelwood fourth and De Pasquale fifth.

Mostert got all the way back to ninth and Percat recovered to 10th, while Reynolds was classified a finisher at seven laps down in 23rd.

The next event is set to unfold at Queensland Raceway on August 21-22.