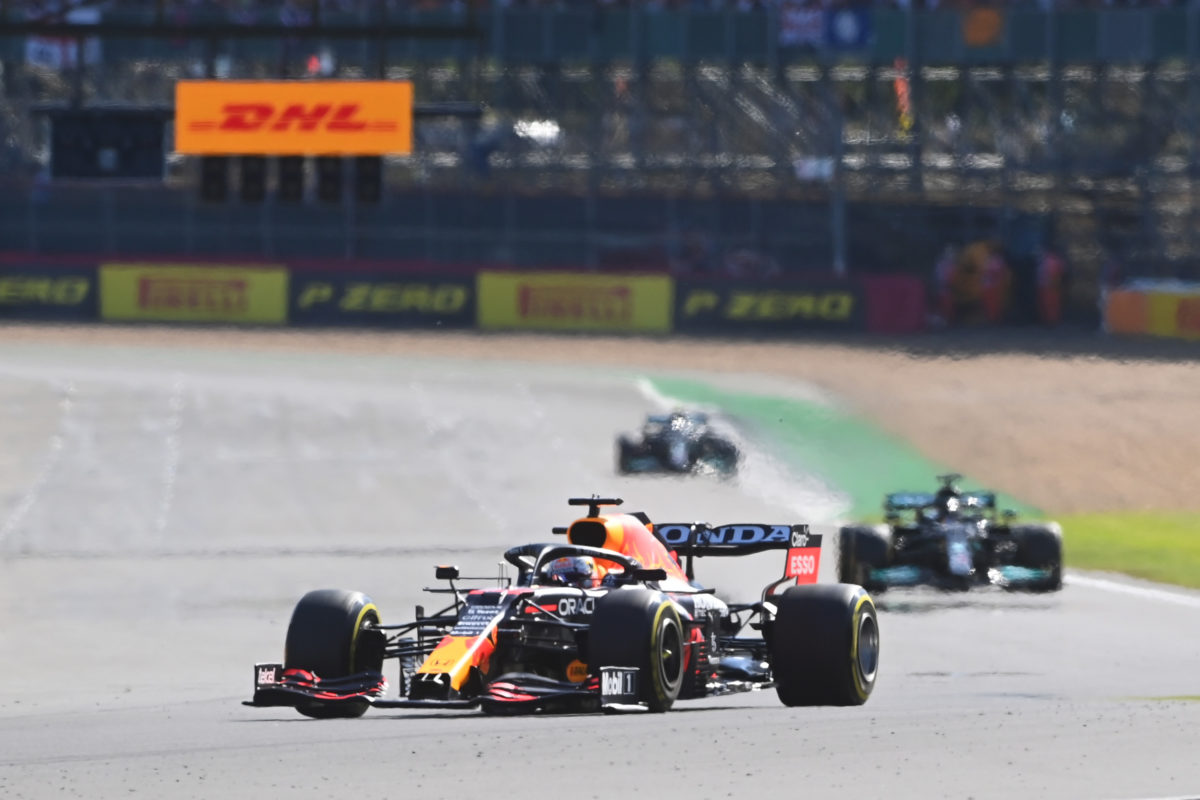 Max Verstappen will start from pole position in Sunday’s Formula 1 British Grand Prix after heading the field in the first-ever Sprint Qualifying session.

The Dutchman beat Lewis Hamilton to the flag, besting his title rival off the start before holding top spot throughout the 17-lap encounter.

An alternate strategy for Valtteri Bottas failed to see any improvements as he remained third ahead of Charles Leclerc.

Verstappen got the jump off the line, heading the field into the opening corner as Hamilton dropped into second ahead of Bottas in third.

A challenge for the lead into Brooklands was unsuccessful before Hamilton then looked again at Copse.

It was a move that hurt the Brit as he fell back on the run up Hangar Straight, allowing the Red Bull to skip slightly clear.

A demon start saw Fernando Alonso climb from 11th to fifth, his progress aided by the soft compound tyres.

He was one of four drivers who opted to start on the red-walled tyres, joined by Bottas, Esteban Ocon and Kimi Raikkonen.

It was an aggressive choice for Mercedes, one clearly aimed at interrupting Verstappen in the opening lap but one which failed to pay dividends.

George Russell and Carlos Sainz clashed on the opening lap at Brooklands, the Williams nudging the Ferrari in an exchange which will be investigated by officials post-session.

Daniel Ricciardo lost a place to Sergio Perez on the opening lap to fall to eighth and fell slightly off the back of the Red Bull in the laps which followed.

That was until Lap 5 when Perez spun exiting Becketts, plummeting down the order as a result.

The Red Bull driver lost control while tucked up in the turbulent air of Lando Norris, who in turn was harrying Alonso.

Having defended valiantly in the opening laps, the Spaniard lost out to the McLaren driver at Village on Lap 5 before he then fell into the clutches of Ricciardo.

At the front, Verstappen had edged away to a more than two second advantage over Hamilton by mid-distance, with Bottas four seconds further back.

Ricciardo found his way into sixth on Lap 10, making the move at The Loop, before having to mount a staunch defence as the Alpine immediately launched a counter-attack.

It was fruitless, the Australian quickly clearing out once the pair had settled their differences at Copse.

At the end of the 17 lap encounter, Verstappen reached the chequered flag first to claim pole position for the British Grand Prix.

His margin over Hamilton was just over two seconds, with Bottas to line up third alongside Leclerc on the second row.

Norris and Ricciardo ensured a McLaren lock out of the third row, with the fast-started Alonso joined by fellow world champion Vettel on the fourth row.

Perez pitted as the field began the final lap, instructed to retire the car as he became the only driver to not see the chequered flag.

Verstappen’s efforts also netted three championship points, Hamilton picking up two and Bottas one, making for a net-zero game between their respective teams.

The British Grand Prix gets underway at midnight AEST on Sunday night/Monday morning.