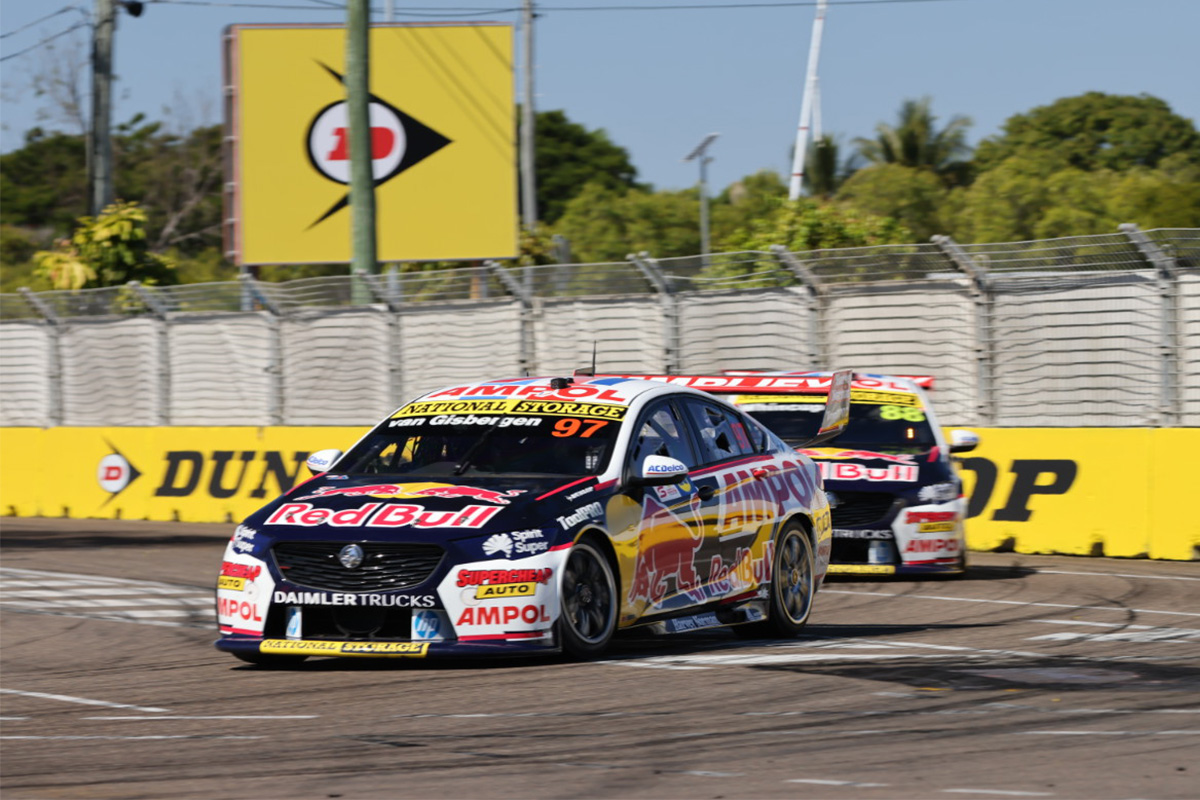 Shane van Gisbergen has jumped Jamie Whincup in the pits to prevail in Race 18 of the Repco Supercars Championship at the WD-40 Townsville SuperSprint.

While the results sheet will read Red Bull Ampol Racing first and second after 39 laps of racing, it was hardly a procession at the head of the field.

Van Gisbergen and Whincup battled hard on the race track, including making contact with each other, after the former stole the lead thanks to a two-tyre stop versus the latter’s three.

Cameron Waters, who won Race 17 and is on pole for Race 19, slipped to 11th by the chequered flag in Tickford Racing’s #6 Monster Energy Mustang.

Van Gisbergen also set the fastest lap of the race, meaning his championship lead over Whincup is now 252 points.

“It was awesome,” said the winner.

“We chose to take two tyres to try to get in front.

“All I had to do was try to keep him behind for three or four laps until he toasted his fresh one and [I] pulled away.

“It was a pretty cool battle, pretty intense, I’m sure there were some tight moments in the garage but it was good fun.”

Mostert held off Davison (#17 Mustang) to run third initially, while Brodie Kostecki quickly climbed to fifth in the opening stages.

Cameron Waters (#6 Monster Energy Mustang) was slow away when the lights went out and emerged ninth from Turn 2 having qualified sixth, while Anton De Pasquale (#11 Shell V-Power Mustang) gained three positions on Lap 1 to sit 11th.

De Pasquale was 10th when he passed Will Brown (#9 Pedders ZB Commodore) on Lap 2 at Turn 11, and was thus first of the top 10 to pit when he took service on Lap 6.

Whincup’s advantage over van Gisbergen peaked at around 2.1s at the end of Lap 10, before the championship leader clawed back a few tenths in the next handful of laps.

Waters was still ninth when he stopped at the end of Lap 11, taking three tyres and losing time when he stalled at the drop.

Whincup’s lead was back under 1.4s at the end of Lap 15, and van Gisbergen had caught him by the time they rounded the final corners of Lap 16, suggesting an error somewhere although nothing was captured by the television cameras.

Car #88 was called into the lane on Lap 17 and Triple Eight Race Engineering changed three tyres, before van Gisbergen and Davison stopped a lap later.

However, the #97 camp opted for rears only, saving van Gisbergen seconds in the pit lane and allowing him to rejoin the race track ahead of Whincup.

Mostert also took two tyres when he was into the pits on Lap 19, resuming an unchanged effective third, as Whincup hassled the new effective race leader in Car #97.

It was the battle for the official lead by the time van Gisbergen had to block at Turn 13 on Lap 21, and again on Lap 22.

With the compulsory pit stop cycle done, Mostert was third and De Pasquale sat fourth although it seemed as though he had only taken rears.

There was a flashpoint between the Triple Eight drivers when #97 went defensive again at Turn 13 on Lap 24, getting a nudge from Whincup before they ran side-by-side up Boundary Street and towards Turn 2.

Van Gisbergen prevented his team-mate from pulling off a criss-cross off that corner and then managed to skip a few tenths clear, and ultimately won by 4.5474s.

Davison passed Fullwood on Lap 22 and De Pasquale on Lap 23, then set about making inroads on Mostert given he had taken three fresh tyres at his stop.

He caught Car #25 inside the final three laps but Mostert held firm and managed to keep third position all the way to the chequered flag.

Hazelwood stayed in the effective top 10 through the race and was one of the notable movers in the closing stages, as was Team 18’s Pye.

Nick Percat (#8 R&J Batteries ZB Commodore) was a notable outside the top 10, finishing 15th after spinning in the pack on Lap 1 in an incident which will go to a post-race investigation.