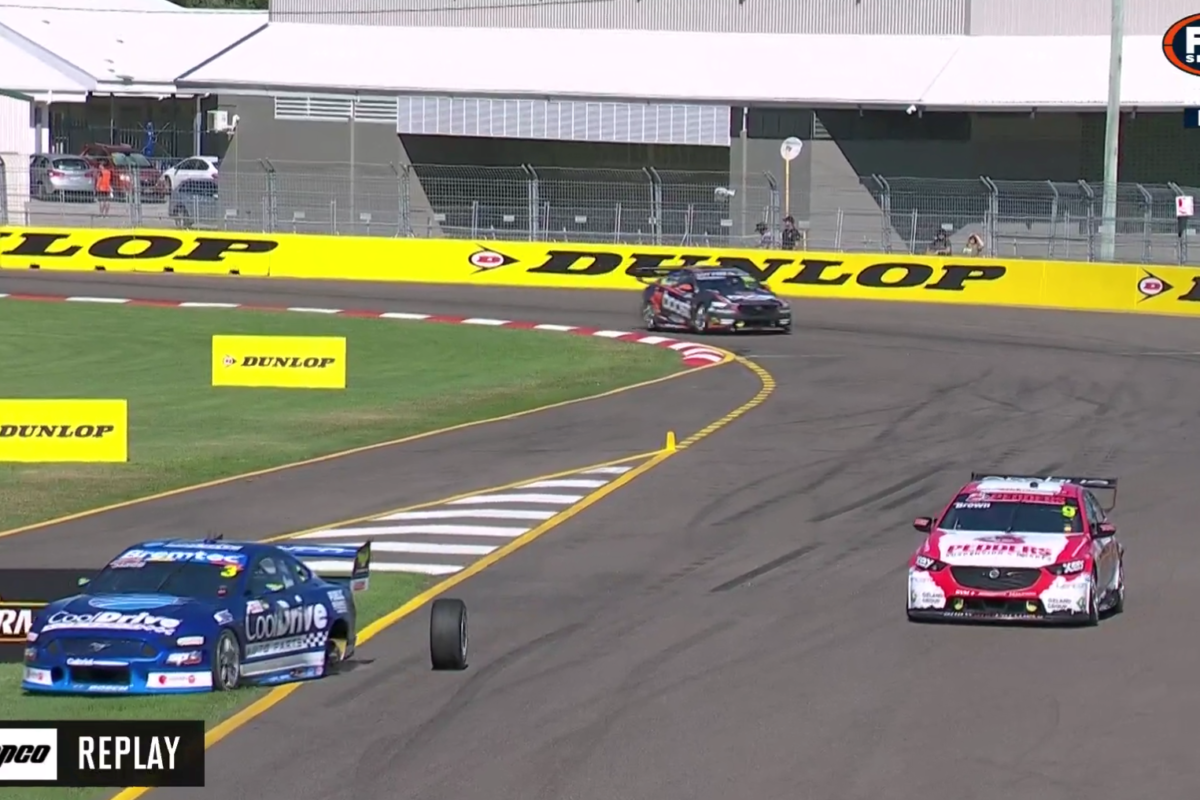 Blanchard Racing Team has been fined $3000 and copped an earlier suspended penalty after a wheel parted company from its car during Qualifying for Race 18 at Townsville.

Tim Slade’s #3 Mustang lost its left-rear wheel during his opening run in the first qualifying session of the morning, and while being near pit entry at the time of the incident was something of a saving grace, he took no further part in the session due to the damage which resulted.

The incident was not the first of its kind for BRT this year, with Car #3 losing its right-rear wheel during practice at Symmons Plains.

As such, stewards not only fined the squad $3000 this time, but also imposed the half of the $3000 fine which was suspended from April, meaning the latest drama cost a total of $4500 in sanctions.

“Following a post-session DRD investigation into the circumstances of the wheel on Car 3, Tim Slade, coming loose while on the Circuit and an admission by Blanchard Racing Team of a breach of Rule B 6.5.6.1 (a) (a person must not perform any act or make any omission which having regard to all the circumstances is negligent), the Stewards imposed a fine of $3000 on Blanchard Racing Team,” read the stewards report.

“As Blanchard Racing Team had breached the same rule in similar circumstances and were subject to a suspended penalty (penalty imposed on 17 April 2021 and suspended on the condition that no further breach of that rule was committed by the team before 31/12/2021), the Stewards imposed the suspended part of that penalty (fine of $1500).”

While the first had no effect such were the splits at the chequered flag, the second drops Car #2 from 11th to 16th in the official classification.

Fullwood had been punished once for an unsafe pit release, and again after he was found to have transgressed in an incident with Slade.

Ironically, Slade had 15 seconds already added to his own race time for failing to leave room for Fullwood during the same race, meaning he is classified 22nd having taken the chequered flag in 12th.

“Following a post-race DRD investigation (instigated following a request received from Blanchard Racing) and an admission of a breach of the Code of Driving Conduct by Car 2, Bryce Fullwood, the Stewards imposed a penalty of the addition of 5 seconds to the Race Time of Car 2 in Race 19,” read the stewards report regarding the matter decided post-race.

Matt Stone Racing was fined $250 due to the line locker on Zane Goddard’s #35 ZB Commodore not engaging during his compulsory pit stop in Race 19, as was Dick Johnson Racing for the same issue on Will Davison’s #17 Mustang in Race 17.

Team Sydney lost $500 due to Fabian Coulthard’s #19 ZB Commodore not having its orange light on (denoting soft tyres) during Qualifying for Race 19.

Coulthard’s team-mate Garry Jacobson had himself been penalised after Race 17 for a breach of driving conduct which put the #22 ZB Commodore back from 15th at the chequered flag to 18th in the final classification.