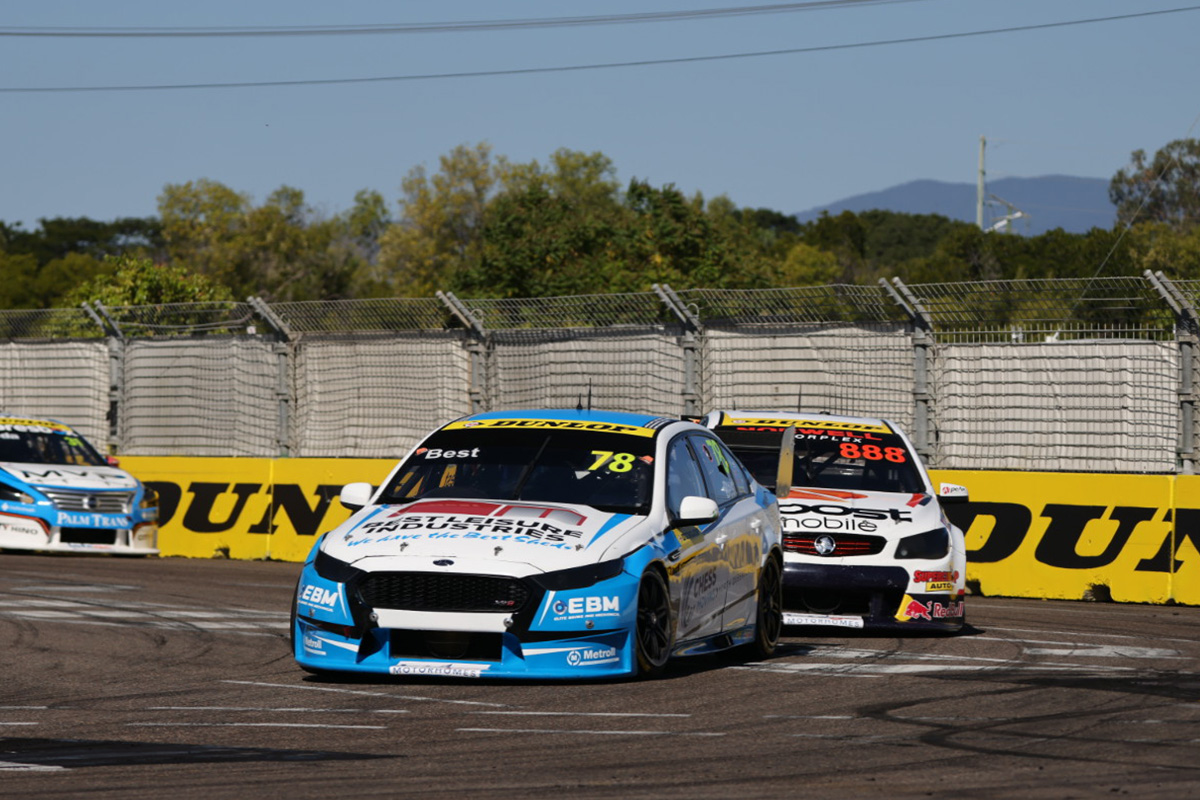 Zak Best has resisted Broc Feeney in a thrilling battle to take a career-first Dunlop Super2 race win, in Round 3 of the season at Townsville.

Best emerged in front after the opening corners of Race 2 but came under intense pressure from the series leader towards the end of the 21-lap encounter.

Best (#78 FGX Falcon) and Feeney (#888 VF Commodore) shared the front row of the grid and ran side-by-side up Boundary Street on Lap 1, while Jayden Ojeda (#31 Nissan Altima) was aggressive from the second row.

It was almost three-wide through the Turn 1 kink, then actually was when Ojeda darted from outside to inside and went deep under brakes at Turn 2.

He fired past both of them as he ran long, but emerged second, behind pole-sitter Best and ahead of Feeney, as Jordan Boys (#49 Image Racing VF Commodore) settled into fourth.

When Ojeda arrived at Turn 2 next time around, he locked the rears and slithered wide, handing second spot back to Feeney.

Turn 2 was an action zone yet again on Lap 3 when Feeney dived down the inside of Best, but he could not pull up in time to make the pass stick.

Best gradually increased his margin and got as far as 1.3s up on Lap 11, before the tide started to turn.

He showed the nose at Turn 11 on that same lap but Best was able to hang tough on the outside, which became the inside line for the Turn 13 hairpin that leads onto the main straight.

Both skated into Turn 2 on the rear brakes at the other end of Boundary Street before Best pulled clear again, with his margin at the end officially 1.0669s.

Feeney took round honours and continues to lead the series, albeit by a reduced, 51-point margin over the race winner.

Ojeda finished a lonely third while Boys was a late DNF after slowing to a crawl on Lap 19 and eventually parking on the grass just inside of pit entry.

Fourth instead went to Angelo Mouzouris (#6 VF Commodore) in the second Triple Eight entry after he managed to keep Jack Perkins (#88 VF Commodore) behind him in the early stages.

Morris had tagged Jack Sipp through Turn 10 on Lap 8, resulting in the Eggleston Motorsport driver going on spectacular, smoky pirouette but somehow managing to keep the #38 VF Commodore off the walls.

Morris ended up 16th outright, while Super3 rival Michael Anderson was a non-finisher with broken steering on the #5 Anderson Motorsport FG Falcon.

It is not known where Super2’s next round will be, given there are not yet new dates for either of the Winton SuperSprint or Beaurepaires Sydney SuperNight.