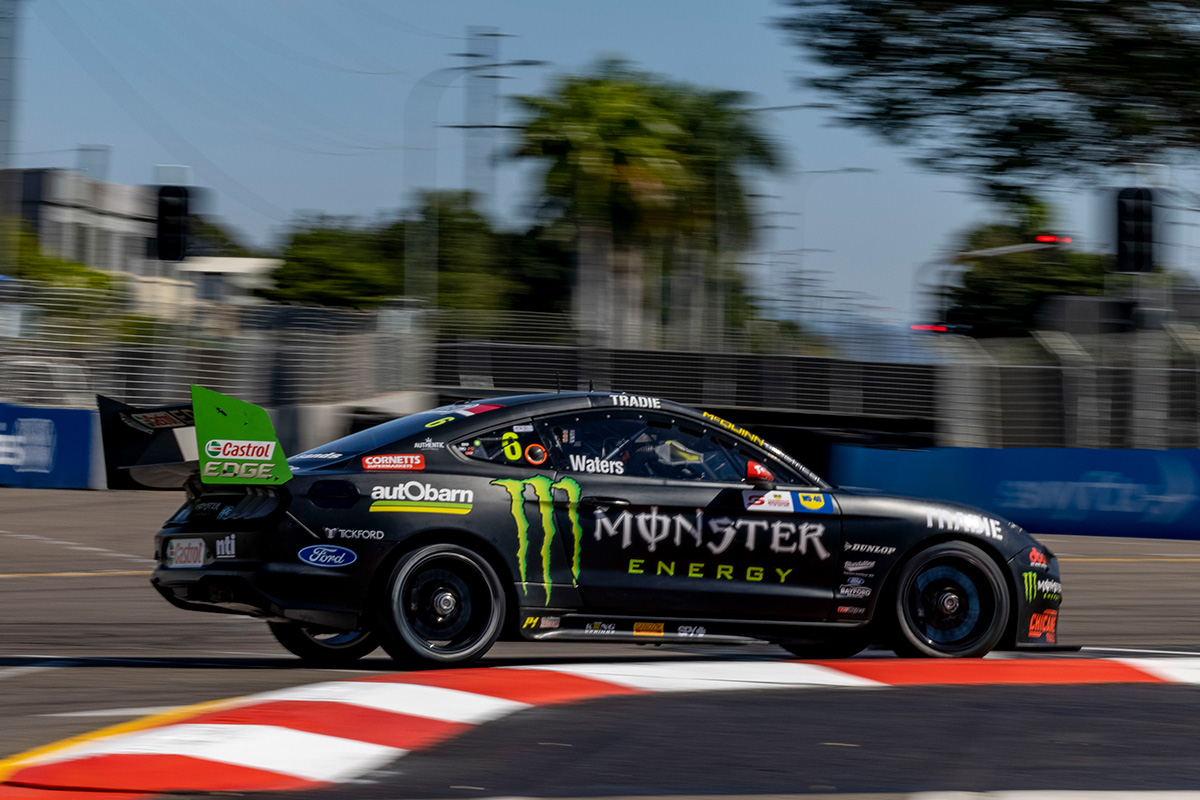 Tickford Racing’s Cameron Waters has won as both Shane van Gisbergen and Jamie Whincup copped penalties in a dramatic Race 17 at the WD-40 Townsville SuperSprint.

Whincup was second at the chequered flag but officially fifth once he had 15 seconds added to his race time for speeding in pit lane, while Red Bull Ampol Racing team-mate van Gisbergen drove back up to sixth after serving a 15-second hold for a driving infringement.

Victory for Waters (#6 Monster Energy Mustang) in Race 17 of the Repco Supercars Championship was set up when he was able to nab track position on Anton De Pasquale as the early leader came up to speed just after his compulsory pit stop.

Van Gisbergen thus leads the championship by a slightly reduced, 239-point margin over Whincup, while Waters took the maximum 105-point haul having also set the fastest lap around the Reid Park Street Circuit.

“Yeah, the old over and under,” said the winner, post-race about his decisive pass.

“So pumped; last week we got smoked and to bounce back it’s absolutely unreal.

“Massive shout-out to Pottsy at home,” added Waters about regular engineer Sam Potter, who is sidelined due to surgery.

“He’s got his leg up [but] he had a lot to contribute to this win so, yeah, a big thanks to him and Ozzie [Nathaniel Osborne] slotted in.

It was a furious opening handful of laps to the contest.

Pole-sitter De Pasquale (#11 Mustang) made a slightly worse getaway than fellow front-row starter Waters but retained top spot courtesy of the inside line at Turn 2, with Whincup (#88 ZB Commodore) taking up third, from Will Davison (#17 Shell V-Power Mustang) and Mostert.

Hazelwood went down the inside of Brodie Kostecki when they arrived at Turn 11 for the first time, with van Gisbergen following, but #99 went deep two corners later.

He nudged Hazelwood wide and that forced van Gisbergen to prop as well, meaning the Erebus Motorsport driver was back up to sixth.

Van Gisbergen went for a forceful Turn 13 move of his own on Lap 2, making side-to-side contact with Brodie Kostecki that ultimately saw Car #99 graze the pit wall as he dropped outside the top 10.

Further ahead, Waters shook off early pressure from Whincup as his deficit to De Pasquale fluctuated around one second in the early stages.

Davison had ceded fourth to Mostert by the time van Gisbergen came hunting on Lap 5, and once again the championship leader made contact as he fired Car #97 down the inside at Turn 13.

Both van Gisbergen and Brodie Kostecki were soon handed 15-second penalties for driving infringements, but it was not clear as to which incident the former was punished for.

De Pasquale got as far as 1.4s clear of Waters, although the gap was just under 1.0s when the latter pitted on Lap 16.

He was followed into the lane by Whincup and both took three fresh tyres, although Triple Eight Race Engineering was relatively slow on the service for the latter.

A critical moment came a lap later when De Pasquale exited the pits from a like pit stop because, while he covered at Turn 2, Waters was able to drive past the #11 Mustang on the run up Charters Towers Road and nick the effective race lead.

Meanwhile, van Gisbergen had passed Mostert for fourth on Lap 12, before pitting and serving his 15-second hold on Lap 21.

Davison had his own drama when he was in the lane at the same time as #97, Dick Johnson Racing reverting to a two-tyre stop but having to leave the hardest-working, left-rear on the #17 Mustang when it got snagged.

Once the cycle was just about complete, Waters led by around 0.8s from De Pasquale, who was followed by Whincup and Mostert, the latter of whom reportedly took only two tyres.

Whincup, however, had just been assessed a 15-second penalty for pit lane speeding, meaning he was effectively seventh.

Tim Slade (#3 CoolDrive Mustang) sat an official fifth, but effectively fourth, while Davison was an effective 11th and van Gisbergen an effective 13th.

De Pasquale came to pressure Waters, but soon had the threat of Whincup in his mirrors, with the Triple Eight driver needing to get by in order to minimise the impact of his penalty.

Whincup made the move when the DJR driver ran wide at Turn 11 on Lap 31, but there was little consequence for De Pasquale from that mishap.

The battle for fourth came down to race against the clock between Slade and Whincup, the latter of whom came up less than seven tenths of a second shy of Car #3.

Van Gisbergen was back into the top 10 when he passed Brown at the end of Lap 28, before squeezing by Percat on Lap 29 at Turn 5, and going underneath Hazelwood later that lap at Turn 11.

The qualifying sessions which will set the grids for Race 18 and Race 19 will be held back-to-back tomorrow from 10:25 local time/AEST.