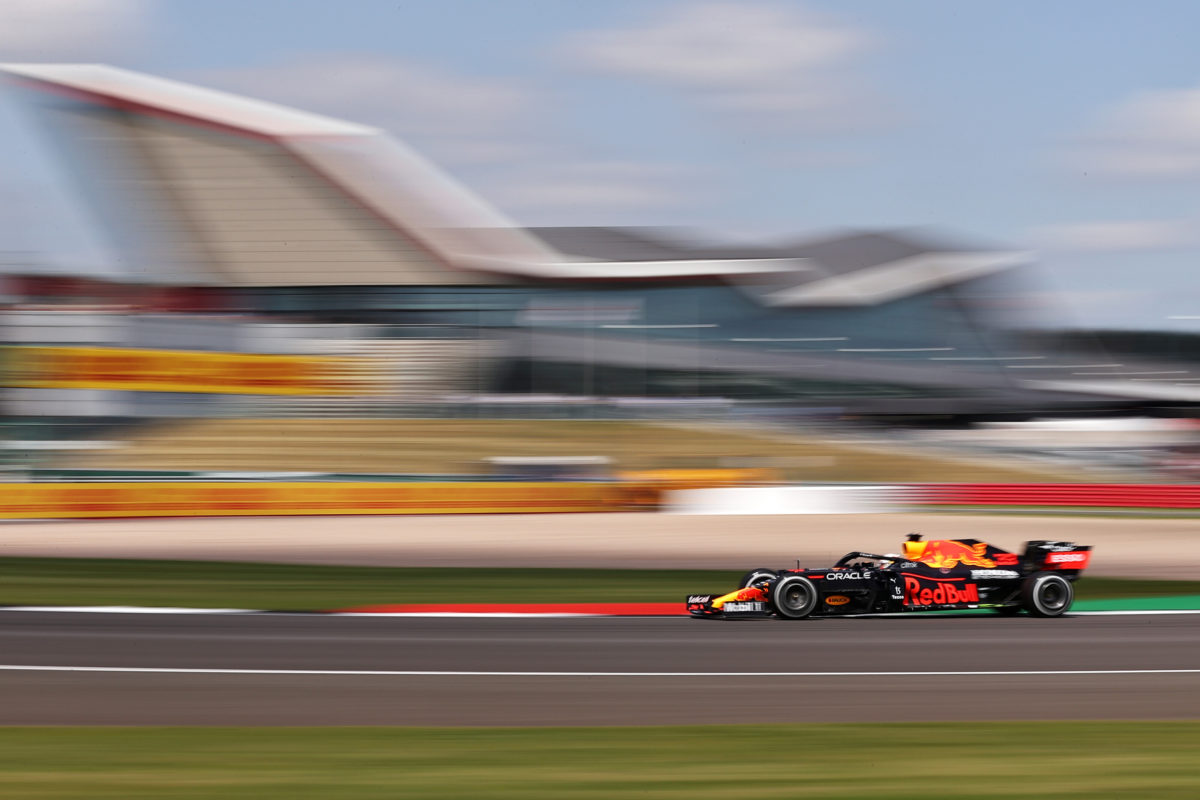 Max Verstappen has carried on where he left off in Austria after dominating the opening practice session for the Formula 1 British Grand Prix.

The Red Bull driver was more than 0.7s clear of the pack, headed by Lando Norris, after the first 60-minute session, with Lewis Hamilton third.

It was a critical hour of running, the only session prior to qualifying which follows on Friday afternoon.

Predictably, it was a busy start to the session as a result, with Hamilton on track out early to the audible cheer of the capacity crowd.

Mercedes had sent both its drivers out on the medium compound tyres, while Red Bull had sent its pairing out on the hards.

Also showing early pace was Esteban Ocon, the Alpine driver sporting a different chassis in an effort to address the form slump the Frenchman had found himself of late.

The two AlphaTuaris also showed well in the early minutes, Yuki Tsunoda and Pierre Gasly split by just half a tenth after 15 minutes.

At the front, the pace continued to improve as Valtteri Bottas lowered the benchmark to 1:29.861s before Hamilton then went better with a 1:29.690s.

The Finn then returned to the top with a 1:29.373s, on a set of medium compound rubber, to move 0.3s clear at the top of the timesheets.

Neither he nor McLaren team-mate Lando Norris had shown much in the way of potential to that point, sitting 15th and 16th respectively midway through the session, three seconds off Verstappen’s pace.

Ferrari was in a similar boat, Charles Leclerc and Carlos Sainz just 17th and 18th before preparing for fast laps with 31 minutes left on the clock.

Looking ahead to qualifying, Haas was the first team to switch its drivers onto the soft compound tyres.

Using a set of soft tyres, Verstappen improved the session’s best to 1:27.035s, moving him 1.1s clear of Perez who remained second best.

Norris and Ricciardo both improved, the latter to sixth before being bumped down as others went quicker, the former among them as he posted the third fastest time – a 1:28.740s on the medium compound rubber.

The Australian then rose to fourth best with his second effort lap, a 1:28.350s still on the medium compound rubber.

Qualifying simulations became the order of the day inside the last 15 minutes of running.

With the soft tyres fitted, Hamilton went third fastest though was unable to better the time set by Norris on the medium tyres.

It was marginally quicker than Bottas had managed just seconds prior as he logged a 1:27.997s on his soft tyre run.

Inside the final 10 minutes, the order began to change rapidly as hot lap simulations continued, culminating with the chequered flag which left Verstappen fastest from Norris and Hamilton, the two split by 0.001s.

Both Ferraris improved while Ricciardo slipped to ninth, one spot down from Perez who was 1.1s away from his Red Bull team-mate.

Cars now enter parc ferme ahead of qualifying, the session which sets the grid order for Sprint Qualifying on Saturday afternoon.

Qualifying follows at 03:00 AEST this morning.