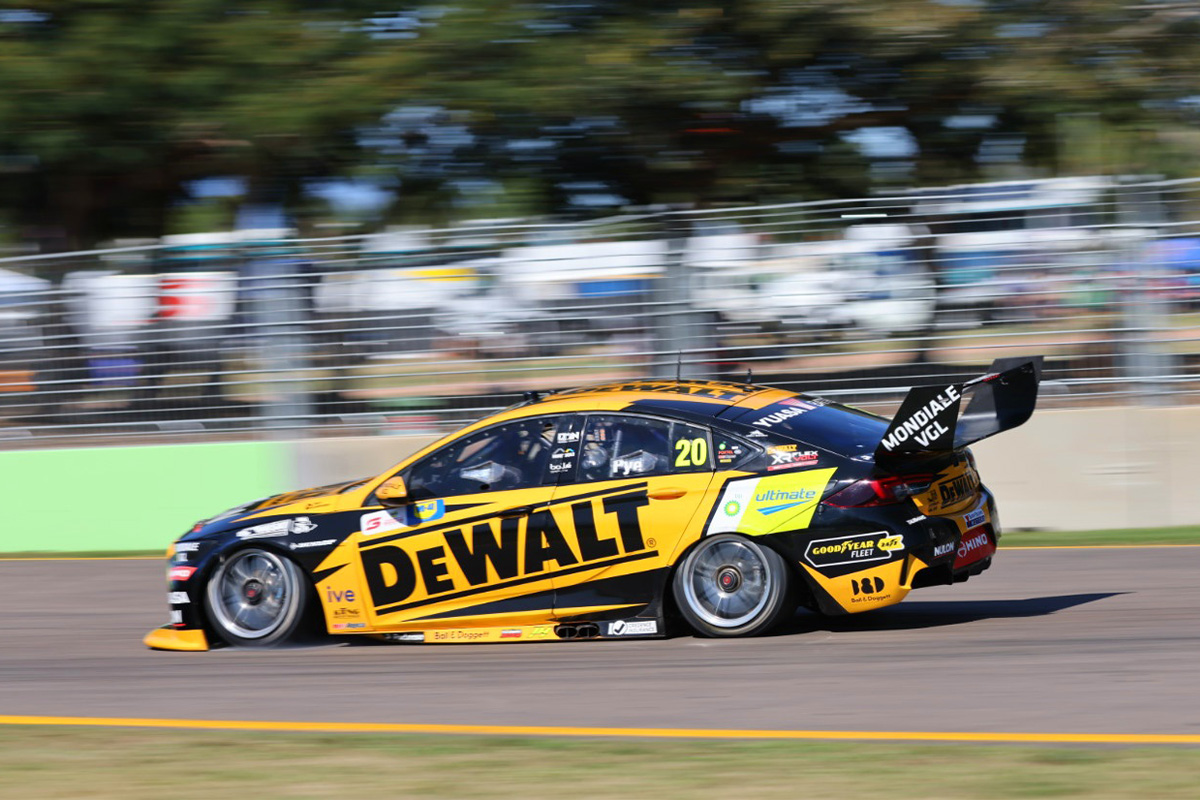 Team 18’s Scott Pye has set the pace in the sole practice session for the WD-40 Townsville SuperSprint.

With this weekend’s seventh event of the Repco Supercars Championship a late addition to the calendar, and coming straight after one at the same Reid Park Street Circuit, each driver was allocated 12 pre-marked and 20 ‘event marked’ (ie new) tyres for the two days of action.

While that meant most would have had to dip into the tyres they will use for qualifying and racing if they wanted to run a green during the 45-minute hit-out, several reportedly still had new hoops in their pre-marked bank.

Among those were Pye, who was the only driver into the ‘twelves’, in his #20 DeWalt ZB Commodore, while Anton De Pasquale managed second-fastest in the #11 Shell V-Power Mustang despite apparently having only used pre-marked rubber.

Those two were also involved in one of the stranger moments of the session, with Courtney and van Gisbergen (#97 ZB Commodore) making early nose-to-tail contact on an out lap at Turn 2.

Said Pye at the conclusion of proceedings, and after a tough outing last weekend, “It’s hard to pick yourself up sometimes after those weekends but all you can do… it’s lucky, we’ve got five days and then you get to go again and have another crack at it.

“The guys have done a big turnaround this week to get all the cars back to where they should be.

“But, to be honest, our race pace last weekend was good, we were just three laps down but we ran with Jamie [Whincup] and Shane.

“I don’t know if that made me feel better or worse watching the two leaders and driving with them for 88 laps, but the car is good.

“We just need to keep our focus, keep our chin up and try to get something out of this weekend before we go home.”

Cameron Waters (#6 Monster Energy Mustang), who is without regular engineer Sam Potter this weekend due to surgery, was next to take the ascendancy with a 1:13.4174s on his second run, almost 10 minutes in.

The fastest lap was finally reset when Will Brown (#9 Pedders ZB Commodore) rolled out a 1:13.3411s on his fifth run with just over 10 minutes remaining.

Reynolds went third with a 1:13.4832s after another five minutes, just before Pye set the 1:12.9331s which would be the fastest lap of the session.

Qualifying for Race 17 is a knockout affair including the Top 10 Shootout as Part 3, and gets underway from 13:45 local time/AEST.