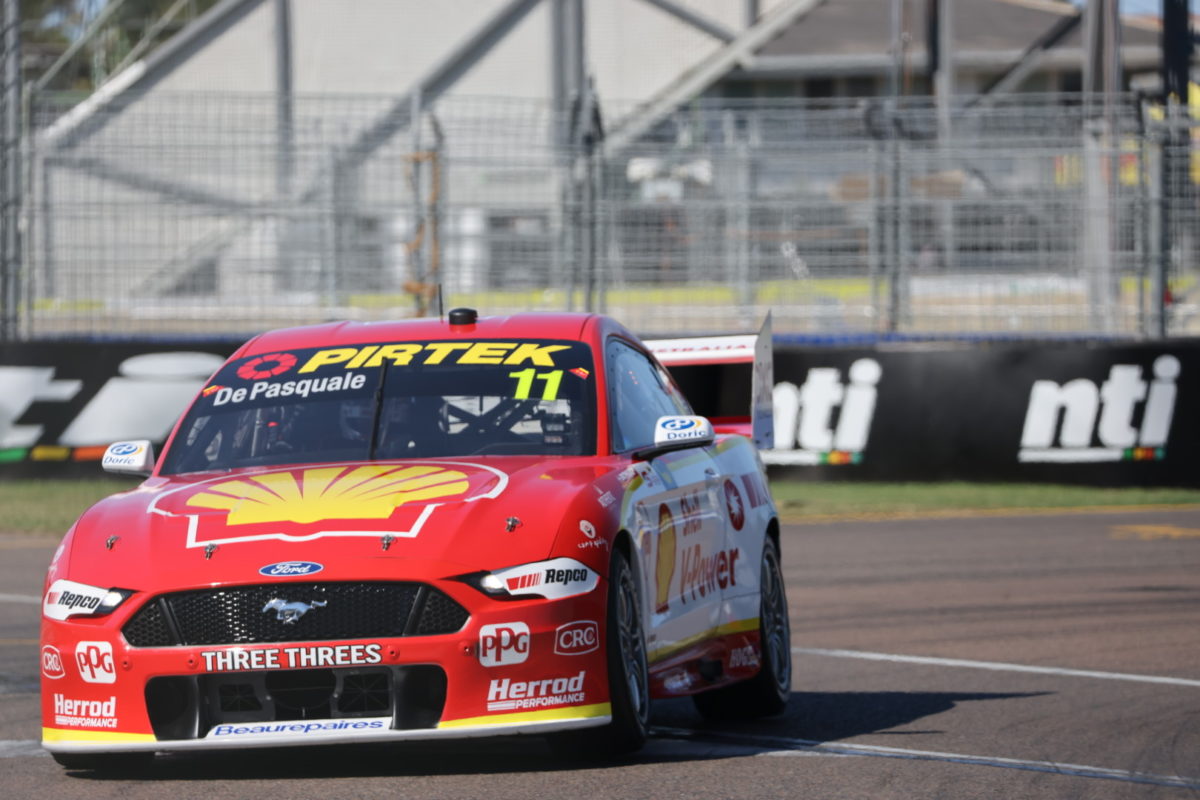 Anton De Pasquale has beaten Cameron Waters to pole position for Race 17 of the Repco Supercars Championship at the WD-40 Townsville SuperSprint.

The Shell V-Power Mustangs of De Pasquale and Will Davison ended up first and third in the Top 10 Shootout which settled matters at the end of knockout qualifying at the Reid Park Street Circuit, while Shane van Gisbergen was on the rough end of controversy.

The championship-leading Red Bull Ampol Racing pilot was the driver immediately following Matt Stone Racing’s Zane Goddard, who slithered into the barriers at the final corner of his hot lap, with the confusion which ensued seemingly compromising #97’s build-up.

Waters was a provisional fourth into the Shootout but punched out an impressive 1:12.8069s in the #6 Monster Energy Mustang, before Mostert set a 1:13.1189s on used tyres.

That left just the Dick Johnson Racing Fords to come, and Davison (#17 Mustang) was up on Waters to the second sector but ended up just shy of the Tickford Racing driver with a 1:12.8357s.

De Pasquale then went and put a tenth on Waters to the first sector, another tenth to the second sector, and ended up breaking the beam back at the control line with a 1:12.6397s.

Qualifying was run in hotter conditions than the sole practice session, which the pole-sitter noted.

“We’ve got a long arvo,” said De Pasquale as he cast an eye to the 39-lapper ahead.

“I mean, I’ve never been a big celebrator but yeah, we’ll try and convert this arvo and then we’ll cheer a bit more.

“But that was really cool, it’s tight, they’re going to make us work for it this arvo so I’m looking forward to it.

“It’s really hot out here, a lot hotter than last week so yeah, all good.”

Van Gisbergen (#97 ZB Commodore) set a messy 1:13.2453s which was fastest of the first five, and sixth-best all told, but far from his liking.

Nick Percat (#8 R&J Batteries ZB Commodore) clocked a 1:13.3833s on his way to seventh-fastest with two new tyres, while Brad Jones Racing team-mate Todd Hazelwood (#14 Tools.com ZB Commodore) got loose off Turn 6 on his way to an eighth-best 1:13.3987s on used tyres.

James Courtney (#44 Boost Mobile Mustang) was also on used rubber and set a 1:13.6524s to earn ninth on the grid from a provisional 10th.

Goddard locked the inside-front of the #35 Yellow Cover ZB Commodore at Turn 13 and slid into the tyre wall, before admitting on the radio, “I missed the [brake] pedal.”

He was on to better the three who had gone before him but will instead start 10th having not set a time.

De Pasquale was fastest in Part 2 of the session in setting an early 1:12.9918s, while van Gisbergen made the Shootout in a provisional sixth despite running long at Turn 3 during his only run.

In rescuing himself with the chequered flag out, he bumped Brodie Kostecki (#99 Boost Mobile ZB Commodore) to 11th, making for an all-Erebus Motorsport sixth row alongside Will Brown (#9 Pedders ZB Commodore).

In Part 1, van Gisbergen was top with a 1:12.9388s on the second straight flyer of his sole, early run, while Courtney survived in 20th despite a late threat from Jake Kostecki (#34 Unit ZB Commodore).

The latter ended up 22nd and will therefore start outside of Bryce Fullwood (#2 Mobil 1 Middy’s ZB Commodore), while Jack Smith (#4 SCT Logistics ZB Commodore) will be inside of Garry Jacobson (#22 PremiAir Hire ZB Commodore) on the back row.

Race 17 of the season, of just over 110km in distance, is set to get underway this afternoon at 16:45 local time/AEST.