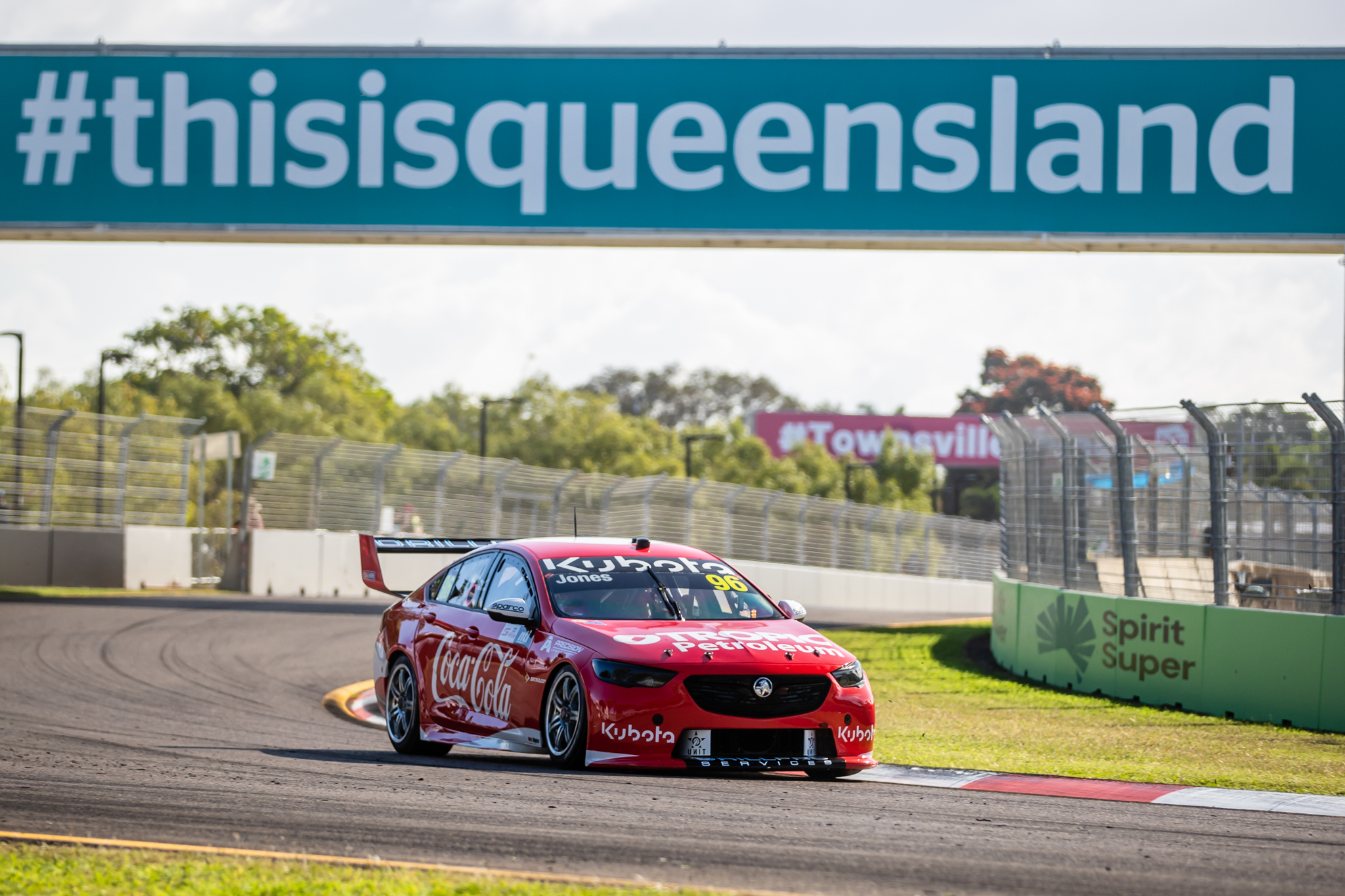 Last weekend’s Townsville 500 was the one that got away from Macauley Jones, but the 26-year-old has reason to be happy.

Finishes of 16th and 14th in Races 15 and 16 respectively don’t paint the full picture of what was a solid weekend for the Brad Jones Racing driver.

Jones was particularly strong on Sunday, nearly locking himself into the Top 10 Shootout until his team-mate Nick Percat bumped him down to 11th at the death in the morning’s qualifying.

The Albury-born driver was struck by bad luck in the afternoon’s race, getting turned around in the Lap 1 melee courtesy of contact from Jack Le Brocq.

Despite one of his best qualifying performances to date, Jones said his work to start near the top 10 is being undone as he struggles to get his car off the line and escape the opening laps unscathed.

“It just seemed to be every time they zigged, I zagged. I went to the inside and that was probably the safer option but they went around the outside.

“It was a little bit annoying. [On Sunday] I felt we held our own on the first lap. Then you’re fighting.

“We’re going step by step at the moment. It’s slow gains, but I guess that’s what it’s always going to take.

“It’s just chipping away at the one-percenters and getting pieces of the puzzle put together.

“I just got turned around there in the race on the first lap, which was really frustrating because I think we had a really strong race car and it seemed to hold onto its tyres really well.

“Everywhere I went I felt like it was the wrong way on the opening two laps. I felt like we had a good first lap up until that point, so that was really annoying. It’s just very frustrating.”

Between seasons, changes were made to the cars that saw sensors removed in a bid to cut costs.

Part of that was the removal of clutch load lights, which aid drivers’ starts. That, Jones said, has been to his detriment.

“My starts are shithouse at the moment,” Jones explained.

“I probably relied too heavily on the load lights last year or in the past because I’ve had it for so long that I’m sort of struggling a little bit.

“You’re sitting on the start line and everyone’s engine is going and you’re trying to feel the bite point and just getting too much wheel spin.

“It’s definitely something we’re focusing on at the moment. I’m about to buy a bit of a shitbox to just drive around in. You never drive around with a clutch. Everyone has got auto cars these days.

“It’s something I want to get back into. Just getting used to using a clutch a bit more often and it becomes second nature. You do two starts in a race weekend, but it’s so important.”

Qualifying has been a strong suit of Jones lately, not qualifying outside the top 15 in the past two events.

“I definitely feel like we’re getting there,” said Jones.

“Our qualifying is improving, we’re just working on that early phase of the race and getting the most out of the car at that point.

“We seem to settle in and have strong race pace. It’s just in traffic I’m struggling to keep the tyres under me.

“I just got pipped by Nick there [in Sunday qualifying for the Top 10 Shootout]. That was a little frustrating but at the same time we’re going in the right direction and we’ll be in one hopefully soon.”

The Repco Supercars Championship will return to the Reid Park Street Circuit this weekend.

Having a second crack is something that Jones said he’s looking forward to.

“All these hindsight things you never get to try until a year later, that’s the cool thing,” said Jones.

“You get through the weekend and you learn what you need to work on and your strengths and weaknesses.

“Have a week, process it all, and just walk across the road from the hotel and away you go.”

Despite some frustration around his race results last weekend, Jones moved forward to 21st in the championship, having started on the back foot due to three DNFs in the first 10 races of the season.