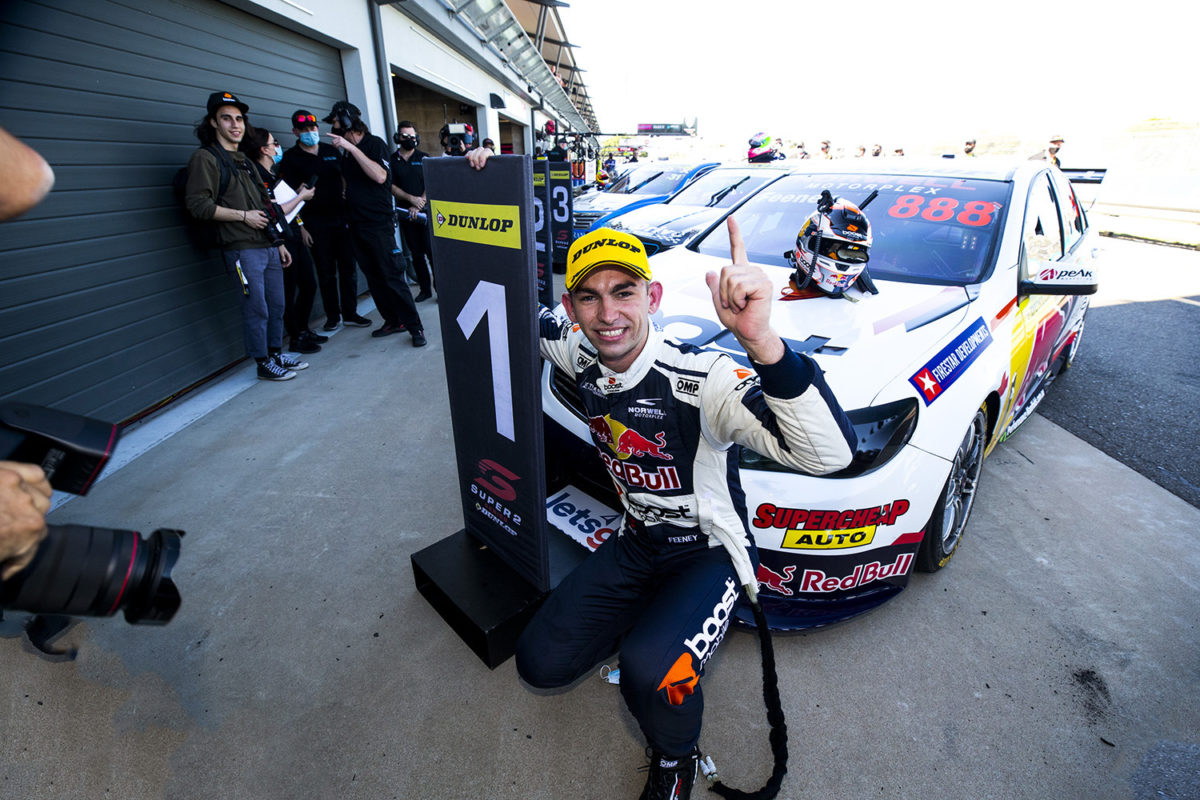 Feeney reclaimed the lead of the second-tier Supercars series with a sweep of Round 2 on the NTI Townsville 500 undercard, having also won Race 1 of Round 1 at Mount Panorama in February.

The 18-year-old is one of the drivers on a shortlist of candidates to take over the soon-to-be-vacated seat which, at least as recently as last month, numbered “three or four”, according to Whincup himself.

Asked by Speedcafe.com about Feeney’s Race 1 performance in Townsville, and implications for 2022, the seven-time champion said Feeney was “clearly doing everything he can to put his hand up for the #88 seat.”

However, Whincup subsequently revealed that Triple Eight is also looking at ‘international’ options.

Feeney, who is guided by Paul Morris, maintains that he is trying not to look too far ahead, but is mindful of how important taking out this year’s Super2 title could be.

“I want to move up to the main series next year; that’s been my goal,” he said.

“At the end of the day, I’ve been trying to focus on this year, and I want to win this championship [Super2] this year, and I know if I do that, I’ll be in the best spot to move up next year.

“I think all drivers on the grid would be lying if they said they didn’t want to be in that seat [Whincup’s] next year; everyone wants that seat.

“I’m just trying to do the best I can on the track – I’ll leave the talking to other people to do off the track – so, to have a weekend like this is awesome for me, and yeah, one weekend at a time.”

The Queenslander not only won both races on the first of two weekends for Super2 in Townsville, but was also fastest in both practice sessions and secured both pole positions, his first two in the series.

He led Race 1 by almost seven seconds before the Safety Car period which lasted until the chequered flag, and prevailed in Race 2 by five seconds despite two Safety Car interventions.

“I feel like I’m on top of the world at the moment; it was an awesome weekend,” exclaimed Feeney.

“Obviously, [the car] rolled out of the truck really good, on top in both practice sessions, and then it felt like the pressure was a little bit on to back it up in qualifying.

“Jayden [Ojeda, MW Motorsport] pushed me very hard in the first qualifying for the weekend, and [we] made a couple of changes and we had an awesome race car [on Saturday].

“It carried over [to Sunday], and to have a really solid qualifying performance, and another great race win, is what I dream of.

“To see the red number [denoting series leader] on the car was pretty exciting as well.”

Feeney was also asked if it was a sense of relief which he appeared to show each time he topped a session, something the 2019 Super3 Series winner put down to the pressure he puts on himself.

“Yeah, hundred percent, I know how much effort I’ve put into this to get to this stage and, to be honest, it’s where I want to and where I expect to be on myself,” he explained.

“Everyone goes on about how there’s outside pressure, [but] there’s not for me; it’s more internal pressure that I put on myself and what I expect.

“The results are paying off, which I’m so excited about, doing so much hard work and just the relief that… as I said, it’s a dream come true, it’s the stuff that you think about at night time, and to come here this weekend and dominate like this has been absolutely awesome.”

Feeney’s series lead is 42 points over Tickford Racing’s Zak Best, ahead of Round 3 at the WD-40 Townsville SuperSprint this coming weekend.