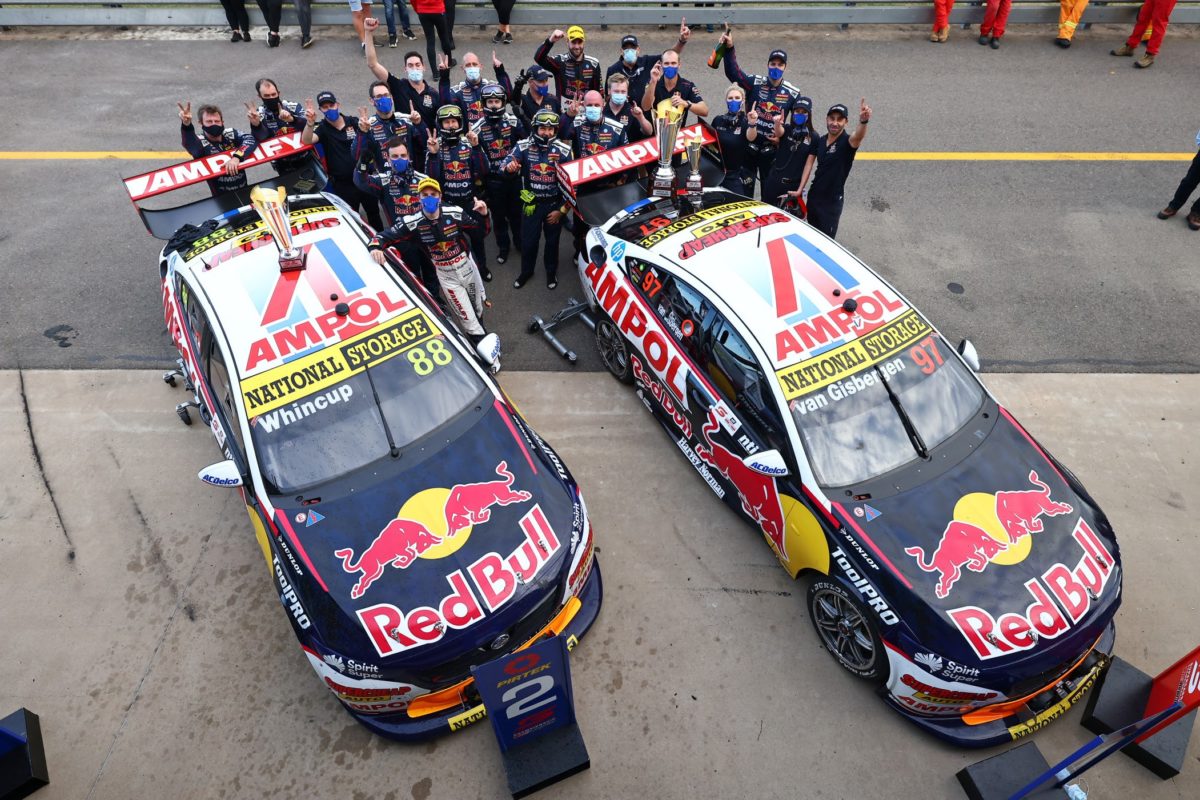 Jamie Whincup says that Triple Eight Race Engineering’s recent dominance of the Repco Supercars Championship, which continued at the NTI Townsville 500, is simply “part of sport”.

Online fan commentary featured an obvious negative thread about Red Bull Ampol Racing’s one-two in each of the two races at the Reid Park Street Circuit, both from front row lockouts.

Not only did Shane van Gisbergen lead Whincup home in Race 15 and in Race 16, they were out of sight of everyone else when the chequered flag flew in each.

The Shell V-Power Racing Team’s Anton De Pasquale was third in both encounters, but finished 30 seconds behind the second Triple Eight car in the first of them and 20 seconds back from it in the second.

Furthermore, Broc Feeney prevailed in one of the Banyo squad’s Dunlop Super2 Series entries in all six sessions which the second tier contested over the previous three days in Townsville.

Out of a total of 14 Supercars sessions at the event, including qualifying hit-outs preceding the Top 10 Shootouts, the only one which Triple Eight did not claim was Practice 1 for the Championship field, when Kelly Grove Racing’s David Reynolds prevailed.

Whincup expressed his hope after Race 15 that the intra-team stoush entertained the spectators and television viewers, before being asked by Speedcafe.com following Race 16 if their dominance was bad for the championship.

He responded by suggesting the performance was a culmination of factors, and predicted that their rivals will strike back at some point.

“I think it’s just all part of sport,” said the seven-time champion.

“Yeah, of course we would love it to be a big scrap between 10 cars every weekend but you see some dominance here and there at different circuits over the years; this track sort of suits our cars.

“You’ve got to piece a lot of things together, which we did well this weekend and hopefully we can do the same next weekend.

“But, we’ll go to another track and there’ll be another couple of cars potentially dominating, so that’s part of sport and we’ll take it when it’s coming our way.”

To Whincup’s point, Triple Eight has won 19 races out of a total of 30 at the Reid Park Street Circuit since its inception in 2009.

That includes at least one victory at all but two of those 14 events, even though its showing in 2013 was unusually poor.

Ominously, for the rest, Supercars has added to the calendar a sprint event in Townsville this coming weekend, given the not immaterial possibility of further disruption arising from the COVID-19 pandemic.

Two SuperSprints were held in the North Queensland city last year, with Triple Eight winning four of those six races and DJR Team Penske the other two.

De Pasquale was not bold enough to predict that Dick Johnson Racing will be able to overhaul their General Motors rivals in the next three races, but intimated that things were not quite as bad as they appeared in the latest encounter.

The man with three poles to his name so far in 2021 was at one point during the middle stint of Race 16 seemingly making ground on van Gisbergen before playing a pragmatic game for the run home.

Asked by Speedcafe.com if it is possible to beat Triple Eight next weekend, De Pasquale said, “I don’t know; we’ll find out.

“Probably the times just didn’t say it so much today [Race 16] but I think our car was a bit better.

“In the middle stint there in clean air, I was pushing quite hard to see what we do have and I wasn’t as much slower as we were yesterday [Race 15] than these guys.

“Last [stint], I was just sort of cruising around, hoping for a Safety Car and having fresh tyres, but that didn’t happen.

“But yeah, we’ve got smart guys at Shell V-Power Racing so we’ll tune something up. They’ll come up with something good; we’ll have a look at it ourselves.

Van Gisbergen’s lead over Whincup at the top of the championship is now 245 points, with DJR’s Will Davison moving to third in the title race at the Townsville 500, in part due to Chaz Mostert’s subpar weekend.

Davison is 125 points behind Whincup while De Pasquale sits sixth in the standings, having already racked up four DNFs this season.