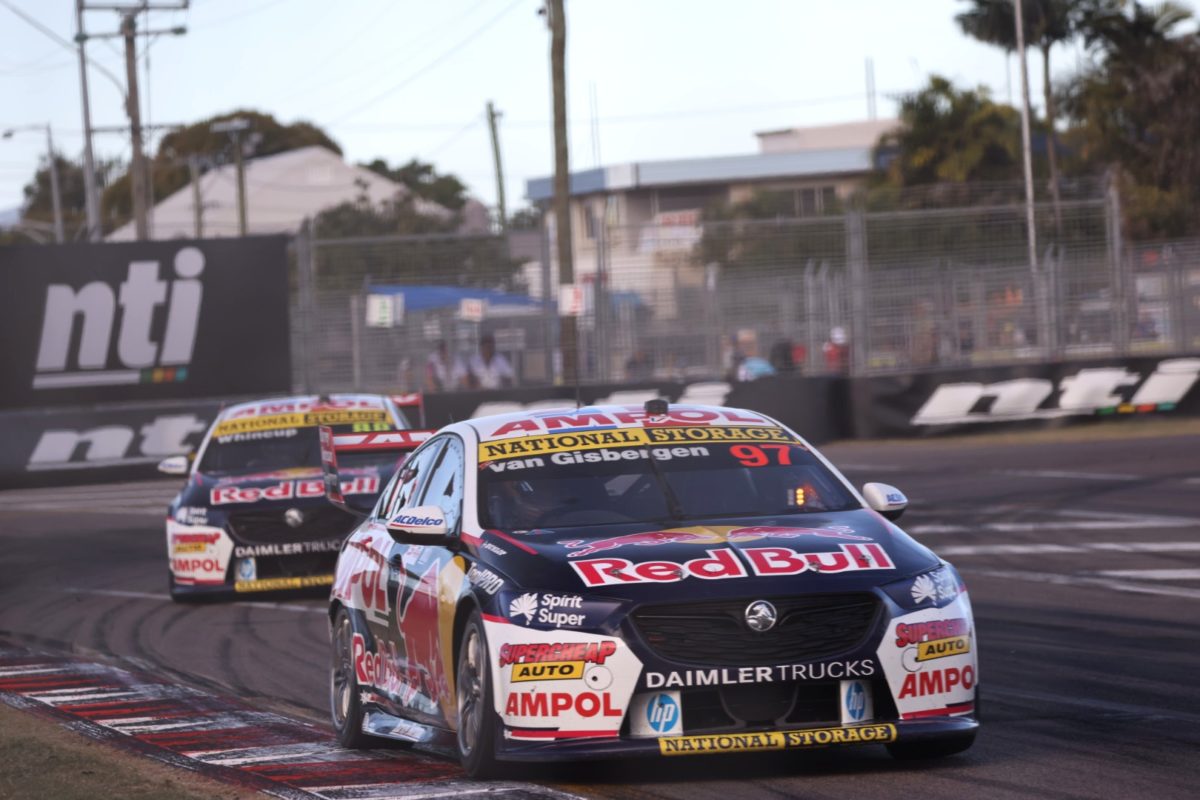 Shane van Gisbergen has won Race 16 at the NTI Townsville 500 in the second Red Bull Ampol Racing one-two in as many days.

The encounter was very much a carbon copy of that which transpired an afternoon earlier, with Jamie Whincup leading the bulk of the race but not having the speed to keep his team-mate behind him all the way.

Van Gisbergen took the win on this occasion by 2.9259s, extending his lead in the Repco Supercars Championship to 245 points over Whincup, while the Shell V-Power Racing Team’s Anton De Pasquale rounded out the podium.

That result was also a repeat of Race 15, with Car #11 a closer yet still distant 20.4086s from the second-placed #88 ZB Commodore, while Will Davison made it Dick Johnson Racing cars third and fourth.

The win is van Gisbergen’s 10th of the season and 50th of his career, about which he remarked, “That’s a pretty awesome number.

“Again, thanks to Red Bull Ampol Racing; our cars were fantastic.

“Another subpar start from me and then I had to pay for it all race but I feel a lot better today; the pace from myself was a lot smoother and just awesome to get another 300-pointer.”

Whincup made a good start from pole but van Gisbergen (#97 ZB Commodore) was slow away from the outside of the front row.

He was jumped by the two Brad Jones Racing drivers who qualified on Row 2, Nick Percat (#8 R&J Batteries ZB Commodore) and Hazelwood, before going deep under brakes on the outside at Turn 2.

Van Gisbergen was able to pinch third back from Hazelwood immediately, then went down the inside of Percat at Turn 11 before the standing lap was out.

Davison passed Slade on Lap 2 and Mostert took 10th position off Reynolds on Lap 3, while Whincup was 1.2s clear of van Gisbergen and almost four seconds up on Percat after 10 laps.

Brown was wide at Turn 3 on Lap 18, allowing both De Pasquale and Davison through.

However, the Erebus Motorsport driver reclaimed seventh from #17 through Turn 10, and that allowed Slade to also slither down the inside of Davison at the hard stop at Turn 11.

De Pasquale quickly caught Waters and passed the #6 Mustang on Lap 22 at Turn 2, by which time van Gisbergen was back within a second of Whincup, but Percat drifting towards 10 seconds from the race lead.

Percat pitted on Lap 25 but his crew was not ready, with team owner Brad Jones later surmising that there might have been a miscommunication given his driver was experiencing a power steering issue and wanted a larger wheel.

Whincup was around 0.6s ahead of van Gisbergen when he stopped for the first time on Lap 28 before De Pasquale and Hazelwood, who had not long traded positions on the race track, came in on Lap 31.

Van Gisbergen was into the lane on Lap 32 and rejoined around 10 seconds behind Whincup, but had reportedly taken on around 91 litres of fuel compared to his team-mate’s fill of 77 litres.

When the cycle completed, the Triple Eight Race Engineering drivers were still top two, with Davison around three seconds further back in third having taken on around 54 litres.

De Pasquale (70 litres) was another eight seconds behind in fourth position, Waters sat fifth after a fill of only around 58 litres, and Hazelwood was passing early stopper Jake Kostecki (#34 Unit ZB Commodore) for sixth.

Eighth through 10th were Le Brocq, Brown, and Bryce Fullwood (#2 Mobil 1 Middy’s ZB Commodore), all of whom would quickly pick off Jake Kostecki, while Mostert was 18th and Percat 20th.

Van Gisbergen was catching Whincup in the battle for the lead, and De Pasquale was making inroads on his team-mate Davison in the fight for the final podium position.

The DJR Mustangs’ paths converged on Lap 49 and Davison allowed #11 through on the run to Turn 2, at which time #97 was over 15 seconds up the road.

Van Gisbergen brought the on-track deficit to Whincup back under five seconds on Lap 50, and on Lap 53 was within four seconds, close to the fuel cross-over.

Davison was first of the front-runners to take his second stop, on Lap 55, Hazelwood was in on Lap 56, and Waters stopped on Lap 57.

They resumed in that order, while van Gisbergen was less than a second behind Whincup on Lap 58, although traffic was also a factor.

That may have explained why Whincup was back to 1.6s ahead when he pitted on Lap 60, taking the set of brand-new tyres which he had up his sleeve.

De Pasquale was a touch under nine seconds behind the official race leader when he took service on Lap 62, before van Gisbergen peeled off from first position and into the lane on Lap 65.

He was 6.0s adrift of Whincup once he tripped Sector 1 on his out lap, with De Pasquale almost 11 seconds further back in third, and Davison in fourth for the run home.

Waters had passed Hazelwood with contact on Lap 62 at Turn 2 and they sat fifth and sixth respectively, ahead of Brown, Slade, Le Brocq, and Mostert.

Van Gisbergen halved the gap to Whincup in the six laps after his second stop, while Brown went down the inside of Hazelwood to take over sixth spot on Lap 71 at Turn 13.

The current championship leader caught the race-leading seven-time champion on Lap 75, and Whincup covered when they arrived at Turn 11 on Lap 76.

However, van Gisbergen went for something of a block pass two turns later, making light contact before driving up Boundary Street in the race lead.

He was then forced to mid-track his car as Whincup seemingly shaped to strike back at the next braking zone, before pulling a second clear in barely more than a lap.

Van Gisbergen was in fact more than four seconds up until he came up on traffic on the final lap, although the victory was hardly in doubt by then.

The two DJR entries had lonely runs to the chequered flag, but Brown spent several laps trying to find a way past Waters.

He eventually did so on Lap 85, with a textbook move at Turn 13, and put almost four seconds on the Tickford Racing driver in the three laps which remained.

Percat finished three laps down in 21st, while Fabian Coulthard (#19 Local Legends ZB Commodore) was the only non-finisher after being caught up in some opening-lap carnage.

The Supercars Championship continues next weekend (July 17-18) with another three races at Reid Park Street Circuit to make up the WD-40 Townsville SuperSprint.